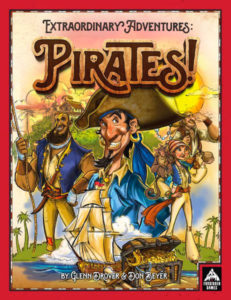 “Oh, better far to live and die
Under the brave black flag I fly!”

~ Gilbert and Sullivan, Pirates of Penzance

Avast there, maties – it’s time to sail the Caribbean, looking for treasure and searching for the Spanish Treasure Galleon. Sail from Havana, St Augustine, and Gran Granada to Trinidad. Along the way discover merchant ships to be plundered, towns to be visited to cash in your cargo, and recruitment opportunities to add to your crew. Can you captain your boat to victory?

Extraordinary Adventures: Pirates! is a deck building game for 2-5 players by Forbidden Games.

Players are attempting to be the first Pirate to find the Spanish Treasure Galleon at Trinidad and collect the greatest amount of booty. Each pirate starts with a small deck of movement and action cards, and a ship on each of the tracks from Havana, Gran Granada, and St. Augustine.

On their turn, a player will play three cards from their hand and act accordingly. When playing a card, the player will choose between the movement on the card or the action thereon if one is indicated. Movement is typically indicated by a number on the card, and a pirate’s ship may be moved backward or forwards. Actions may award longer moves on particular tracks, or allow the player to cull cards from their deck.

When a player lands on a merchant ship space with cargo cubes on it, the player plunders the ship, taking the cubes to their play area. In port areas, the player may choose a port card (crewmate) to add to their deck, increasing their available moves and actions. Additionally while in port, a pirate may trade cargo cubes for treasure tiles (which award VPs at the end of the game.)

The game ends when one pirate reaches Trinidad. Points are awarded for treasure tiles, treasures cards, cargo, and their advancement along each track. The player with the most points is the Pirate King!

Extraordinary Adventures: Pirates! will have the most flat-footed of landlubbers singing a shanty and calling for their ration of rum. A clever, well-balanced deck builder, Forbidden Games has produced another game that’s both a fantastic intro for new players to a well-loved mechanic and as a fun take for experienced ones.

At its heart, it’s a deck builder. But instead of paying for cards with a currency or other cards, you’ll have the chance to ‘recruit’ (the cards represent your crew) from other ships and at ports. Also, culling your deck (key in most deck builders) is available from the start.

The board evokes the feel of a map of the seven seas, while each pirate card displays a playfully rendered addition to your crew. Artist Mark Page has done an excellent job of balancing lush setting with a cast of pirate characters worthy of any captain’s crew. Additionally, a little parrot told me that the pirate ships will be miniatures!

Pirates can choose to take it slow and collect lots of booty or speed along the tracks to race for Trinidad. The well laid out rulebook is also full of random pirate facts. And the more the merrier – the more participating pirates, the more cutthroat the competition.

Shiver me timbers – Extraordinary Adventures: Pirates! is a rollicking adventure in deck building that’s accessible to old and new players alike. Dust off your eyepatch and get ready for some cutthroat action on the high seas as you sail to discover Spanish gold. Collect booty or race for Trinidad, but only one profiteer will amass the most wealth and be named pirate king.

Extraordinary Adventures: Pirates! launches today on Kickstarter. If you’d like to become a backer, pledges start at $49, with an expected delivery of August 2019. Be sure to head over their campaign page for more information or to get your copy.