Home About Board Game Quest

About Board Game Quest

Board Game Quest started in the summer of 2012 as a simple board game blog. The goal was to play games, post reviews, and session reports, and maybe encourage others to discover something new.

Since then, Board Game Quest has expanded in both content and popularity. What started as a simple blog has become a full board game news, review, and information site. Now Board Game Quest works hard to provide you with weekly board game reviews, news, interviews with game designers, and information on upcoming Kickstarters. We are constantly expanding the content we provide and increasing the frequency in which articles are posted. We hope you find a lot of information here and check back often. If you have something you’d like to see covered on the site, feel free to drop us a line via the contact page. 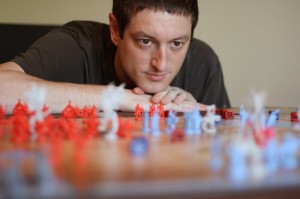 Tony has been an avid gamer since playing Hero Quest early on in his childhood. He eventually expanded out into games like Battle Masters, Risk, and Dungeons and Dragons. After college, he found out about the larger board game world that he never knew existed. Discovering the new genre of games, the Eurogame, opened a whole new world to him. The Settlers of Catan, Carcassonne and Formula De were some of his early “gateway games”. Today, Tony’s board game collection is ever-growing and takes up an entire room in his house. He thanks his generous wife for her support in this crazy endeavor. 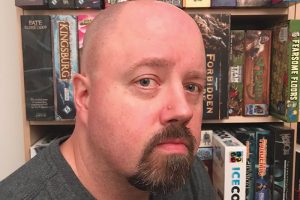 Brian’s gaming addiction started when he was twelve when a close friend introduced him to Dungeons and Dragons. Years later, his DM wanted a break from RPGs and introduced the group to one of the first Milton Bradley Gamemaster series: Axis and Allies. Well, after playing just one game; let’s just say Brian now had two loves to balance. The board gaming floodgates really opened for him when his group added other games to their rotation like Risk, Conquest of the Empire, Fortress America, Shogun, and of course Dark Tower (those damn Brigands). Before high school and after college, Brian continued to collect and play various types of board games. He has never been able to shake his need for a board game “fix” or his connection to like-minded gamers (hence how he ended up at Board Game Quest). Brian would thank his wife for putting up with his two hobbies for all these years but long before they married he came out of the “gamer closet” to her and she has accepted his other loves ever since (or at least puts up a good front). 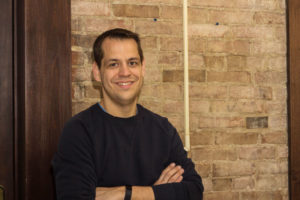 Breaking into board gaming after a long battle with MTG addiction, Andrew has become a lover of the epic eurogames. He will play almost anything, but loves the decision making and critical thinking that comes with heavy euros. His local group is small but consistent and often plan a game night around a single long experience, with maybe a couple filler games thrown in. Andrew now shares his love of gaming with his 6-year old son, introducing him to the cool kids games that modern board game companies have to offer. 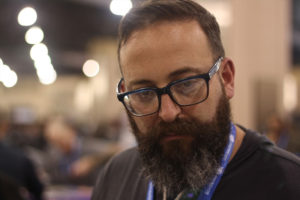 Alex grew up enjoying board games, playing mass-market games like Monopoly, Life, and Clue, but also some hobby titles like Rivers, Roads & Rails, Torpedo Run, and Race to the Roof.  Having played a few board games in between sessions of RPGs with their friends, Alex and his wife Stephanie were invited to go to Gen Con. Attending Gen Con was a revelation for them, exposing them to the wide world of hobby board games, with Settlers of Catan, Ticket to Ride, and Battlestar Galactica among the car full of boxes they brought back home to New Jersey. That trip was also when Alex and Steph met Tony for the first time, inviting him to join for a game of BSG on the random. Video games are not an option for Alex, as he gets extremely motion-sick, leaving his time and money budgets open for board gaming. Alex loves playing games of all types (except Cards Against Humanity and the like,) is a sucker for an immersive theme or innovative game mechanic, and is always on the lookout for a game that plays well with two players. When not playing board games, Alex can be found teaching science to impressionable youths, cooking delicious food of all kinds, picking things up and putting them down, and carrying backpacks filled with weight over long distances. 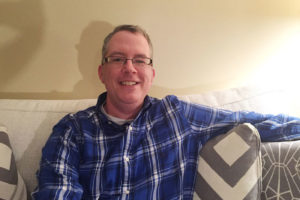 Brian has always liked board games. Even after humanity left the Dark Ages and engineered the “Atari 2600,” “Nintendo Entertainment System,” and “Game Boy,” he still found himself playing Masterpiece, Fireball Island and Survive!. But, as he grew older, the immediate gratification and glamour of video games lured him away from board games… well, that and girls in college preferred Mario Kart to Fortress America. After graduating from college, he discovered you could play games online with people all over the world. Unreal Tournament. Quake. EVERQUEST. The PC gaming world was his new playground! One day, while scouring the Internet for help on how to min/max his Halfling Druid, he came across Board Game Geek. A smoldering fire was rekindled. He began purchasing modern board games. Puerto Rico. Settlers of Catan. Carcassone. He found playing board games to be a more fun, social, and a more satisfying hobby than video gaming (that, and he was sick of being headshot by 11-year-olds in Call of Duty). Brian is now married to his beautiful gaming wife (favorite game: Stone Age) and has three beautiful children (favorite game: Lords of Waterdeep). He does not have a favorite type of game, but he does prefer randomness to perfect information. 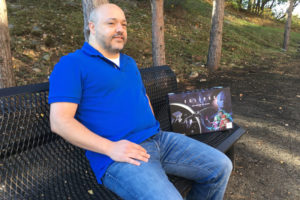 If you go back far enough, you’ll often find a seminal event responsible for a lifetime of gaming. Playing Dungeon! at an elementary school birthday party was that event for Tahsin. Raised on fantasy adventure from Dungeons & Dragons to Advanced HeroQuest, Tahsin was also spoon-fed big box area control classics like Axis & Allies and Supremacy. He also managed to have a few side orders of Car Wars and BattleTech for good measure. After a brief phase collecting Magic: The Gathering in college, he went through another phase of D&D fascination with the release of 3rd Edition. His foree into modern board gaming started with Doom: The Board Game and Descent: Journeys in the Dark. Finding that board games offered more episodic and varied play than roleplaying games, he switched over entirely to board games in 2011. His favorite games have ties to his roots in area control and heavy theme but it took roping his wife into gaming to discover a love for Euro design. Hybrid Euro designs with heavy theme and spots of area control fill his shelves and his gaming passions always extend to gaming with his wife and gamer-in-training son. 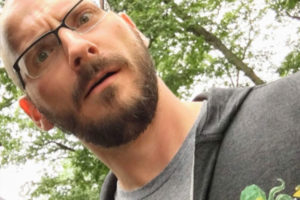 Jon has been an avid gamer since playing Magic: The Gathering and the Star Wars CCG (poorly) with his older cousins as a child. While the Star Wars CCG faded from his gaming groups, MTG held fast (though still poorly) through his college years along with Dungeons and Dragons and Risk. In grad school, Jon was introduced to the larger hobby board game world by Board Game Quest’s very own Alex and Steph and eventually, the expansive land of the Eurogame opened wide before him. Today, Jon’s board game collection continues to grow with a special focus on wooden cubes, undersized card, and games that start working well at 2 players. 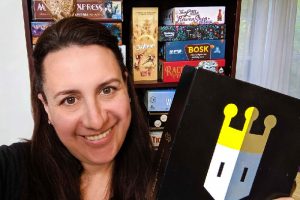 AnnaMaria grew up in a gaming household. Childhood fascination with Triominos, Clue, and Scrabble would eventually evolve into late night dorm sessions of Axis & Allies or Tigris & Euphrates, which in turn were eventually supplanted by adult game nights featuring 7 Wonders, Twilight Struggle, and Time Stories. Somewhat of a nomad, her first priority in any new locality is to find a game group. She is also an advocate for inclusivity in gaming. AnnaMaria currently resides in the Seattle area and when she isn’t gaming you can find her hiking and searching for the perfect lobster roll. 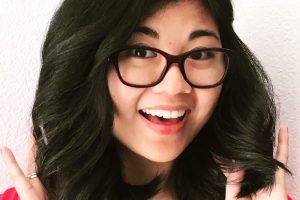 Michelle was very fortunate to have jigsaw puzzles and board games as a staple at home and with friends. The most memorable board game from her childhood was Goosebumps: Terror in the Graveyard before she received Settlers of Catan as a Valentine’s Day gift in college, and then encountered Roads & Boats six years later. She loved being stumped on her first turn and found that this was also true for games from asian designers, particularly airship city. Now, she enthusiastically writes about heavy eurogames on her personal blog, touts the title Cruel Quizmistress of a series of boardgame emoji quizzes on Twitter called “What Did Bunny Play?”, and is an amateur photographer of food, travel, and boardgames on Instagram. 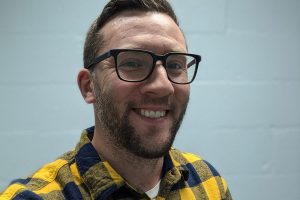 Jason’s first experience playing a modern hobby board game was back in 2006 being taught Catan in Germany.  Since then, he has gone through the typical hobby board game cycle: get excited about new world, purchase frenzy, play games and refine tastes, regret previous purchases, and finally, refine collection. But he’s come out fine on the other end. In between learning and playing all these games, he’s found that the most important aspect has been getting to know people, their stories and making friends.