A couple of weeks ago we announced our nominees for our 6th Annual Board Game Awards. 2018 had some great offerings for tabletop gaming and we always enjoy taking one last look back at the year to recognize the best and most creative among them.

Today we are excited to announce the winners for our 2018 Board Game Awards. As usual, the voting was difficult and some categories were extremely tight. But our editorial staff (along with input from our readers) have made their selections. So without further ado, here are the winners of our 6th Annual Board Game Quest Awards. Congratulations to all the winners and nominees.

Detective took the investigative genre and give it a shot of adrenaline with its computer-integrated gameplay. My favorite moments in Detective were from losing myself in the police database, reading case files, backstory on criminals, and even watching videos. Players have to put their heads together and think hard to try and piece together all clues in the short amount of time they have to solve the case. We tore through the first 5 cases and have been excited for the upcoming expansion that will let us jump right back in.

Runner Up: The Reckoners 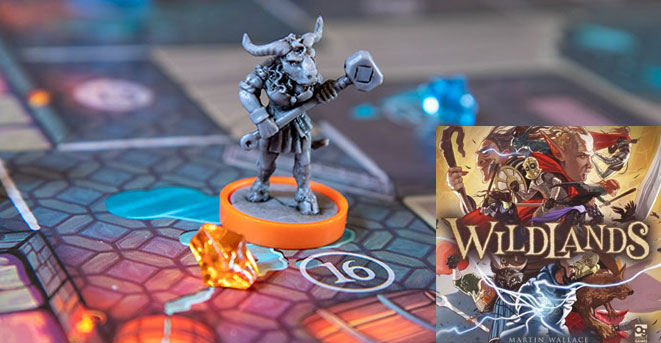 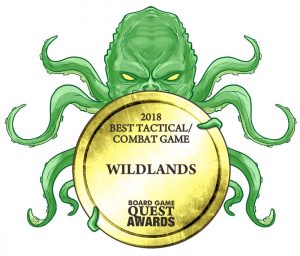 Who would have though that a veteran eurogame designer like Martin Wallace would have made one of our favorite tactical games of the year. Wildlands is an accessible and clever skirmish game that allows anyone to jump in and start playing, no matter their experience level. And yet behind that simple ruleset are some really innovative mechanics (like the interrupt actions) that will have players glued to the board until they collect the last crystal.

Runner Up: Lords of Hellas 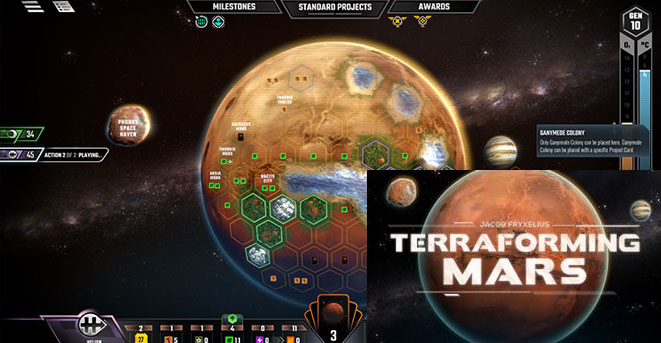 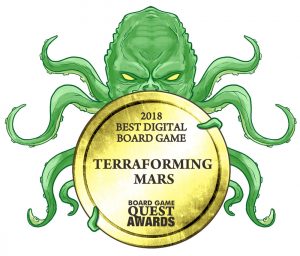 One of our previous games of the year made the jump to digital last year with Terraforming Mars on Steam. While we are still looking forward to playing this on our tablets, we’ve still been having a ton of fun with the constantly evolving digital version. This engine building game allows players to get their Terraforming Mars fix in a fraction of the play time. 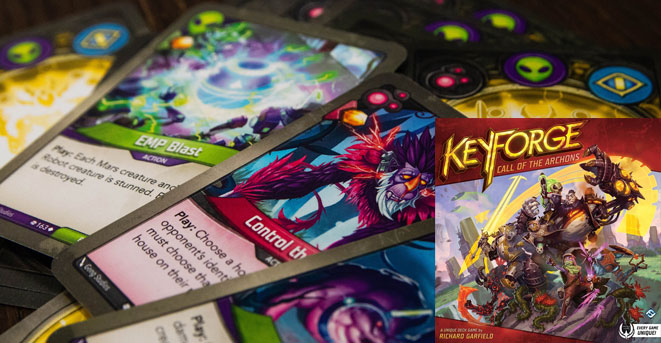 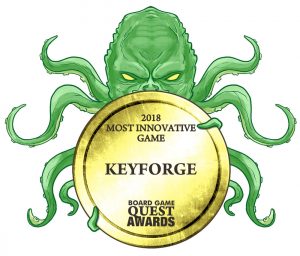 This was a tough year for the innovative category as there were many excellent choices. In the end, we had to give the nod to Richard Garfield’s Keyforge: Call of the Archons. I fully admit I was skeptical when the game was introduced at Gen Con 2018, but darned if he didn’t pull it off. The “every deck is unique” system works really well and allows players to stay on even footing and avoid having to “chase the meta”. For players that just want to jump into the CCG waters and not worry about deck construction or hunting down rares, this is your game.

Runner Up: Detective: A Modern Crime Board Game 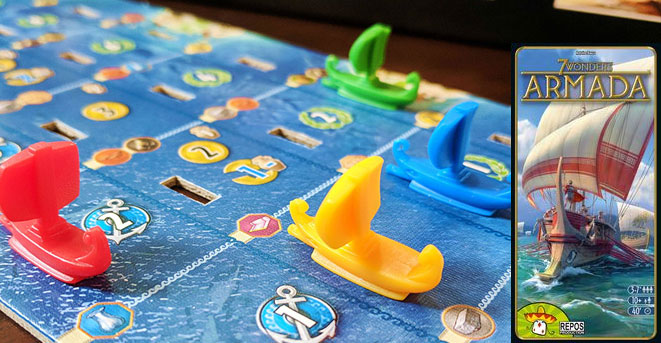 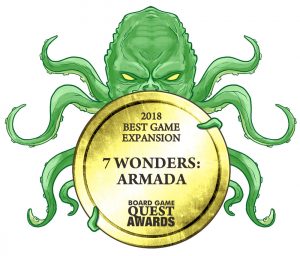 The fourth major expansion for 7 Wonders is probably one of the best. Not only does it let us forget about Babel, but it solves some of our minor gripes with an otherwise amazing game. No longer are you limited to military action against your neighbors, but now you can sail across the see to harass other cities. Not only that, the shipyards in 7 Wonders: Armada help make every decision in the game more meaningful, even if you are passed a hands of subpar cards. This is the expansion I’m always going to want to play with.

Runner Up: Scythe: Rise of Fenris 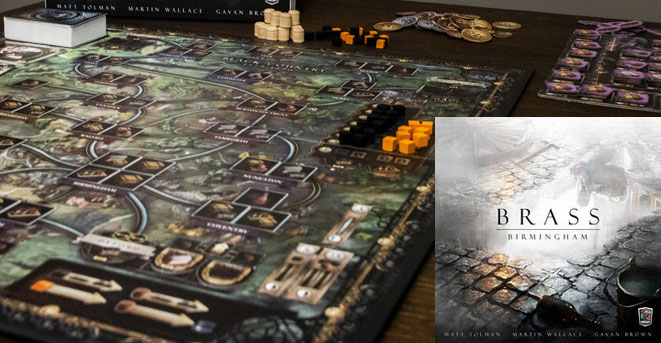 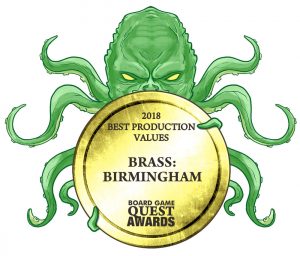 The followup to the acclaimed Brass, the heavy economic strategy game from Martin Wallace, deserves every bit of praise that’s been heaped upon it. It’s rare when a eurogame can impress us this much with its production values, and without a miniature in sight! Brass: Birmingham not only is excellently produced, but the thematic artwork is also top notch. Publisher Roxley Games hit a home run with this title. 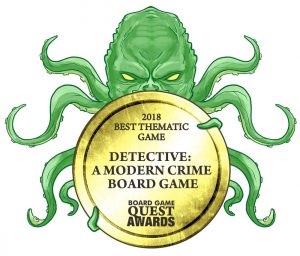 Collecting its second award this year is Detective: A Modern Crime Board Game. To piggy back off what we said above, it’s Detective’s integration of tabletop elements and digital app that work so well together. Players are immediately sucked into a world where they are detectives, trying to solve a series of crimes. The overall experience between cardboard and digital elements seamless, with the website able to enhance the play experience, instead of distract from it. 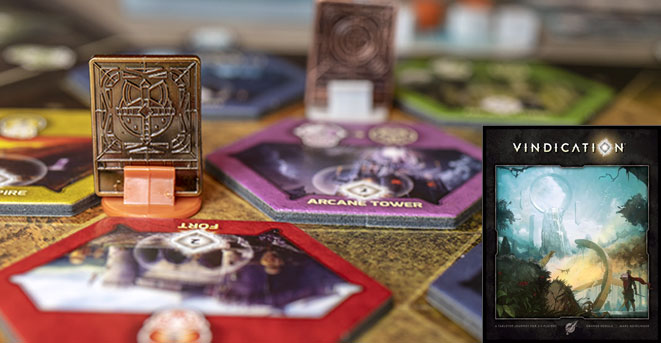 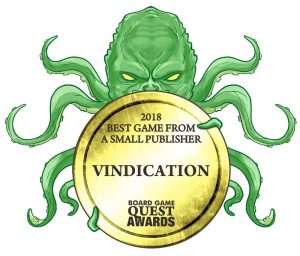 Publisher Orange Nebula Games made us take note this year with their cube pushing game Vindication. Not only were the production values outstanding, but the gameplay had the chops to back it up. The box is overflowing with content, giving this one tons of replay value. Even after quite a few plays, I feel like I’ve only scratched the surface of all the content Vindication has to offer. 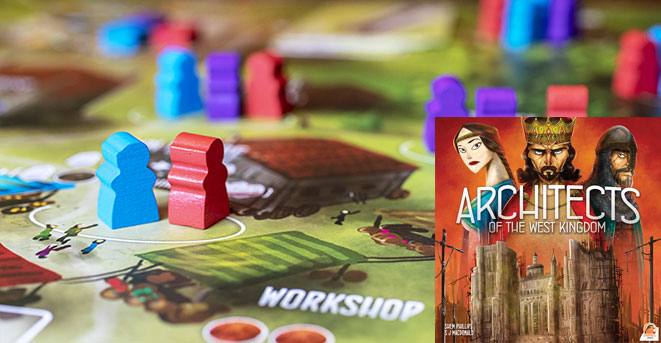 This worker placement game gives players a fresh look at the genre overflowing with options, thanks to its unique play style. Instead of the usual “start with a couple of workers and unlock more”, Architects of the West Kingdom goes the opposite route and dumps a pile of them on you at the start. The key is that not only can multiple workers boost your actions, but you can actually round up other players workers and ransom them off! 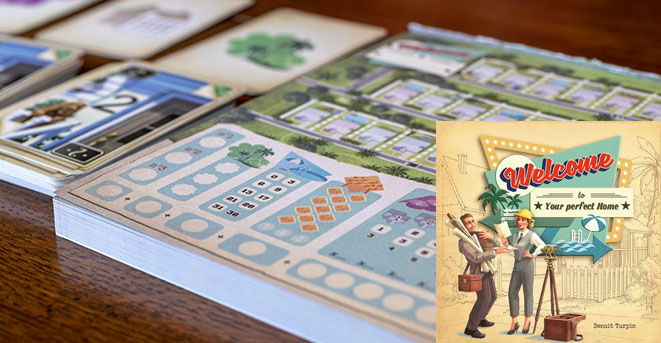 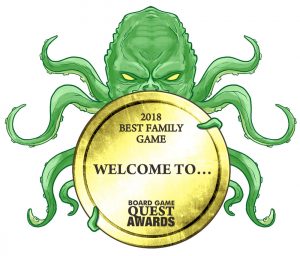 This unique “draw and write” game took the rolling and write genre by storm by forgoing the dice for 3 decks of cards. Each round you’ll flip three cards, giving you a number to write and an action to take. While the rules in Welcome To… aren’t super simple, they are logical enough that you can enjoy this one with family or non-gamer friends. And the gameplay is deep enough that you won’t find yourself wishing you were playing something else while you attempt to make your perfect subdivision. 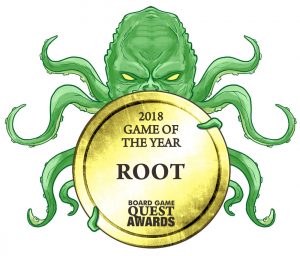 I’ve played Root more times than I can count over the past year and have enjoyed every game. Publisher Leder Games seems to have learned a lot from their first asymmetrical offering of Vast, because Root take on the asymmetrical is nothing short of stellar. Each player controls a wholly unique faction, yet there are enough common rules in this light war game to help make learning the game a breeze. And since the factions all feels so different, players are constantly torn between replaying a faction to learn it better, and trying a new one out. Combine all that with a great theme and some fantastic artwork from artist Kyle Ferrin, and you have an easy choice for our 2018 Game of the Year.

Runner Up: Architects of the West Kingdom

Note: Per award rules, because it won Game of the Year, Root was removed from consideration from other award categories. 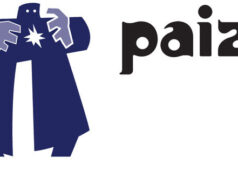 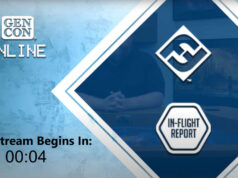