We review Root, an asymmetrical war game published by Leder Games. In Root, four different factions are vying for control of the forest with each of them winning the game in a slightly different way. 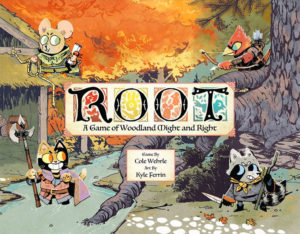 “Oh, look at those cute little woodland creature meeples,” I can hear you saying. Root certainly has all the looks of a carefree romp in an enchanted forest. But happy-go-lucky this forest is not. Despite appearances, Root is a cutthroat war game where you’ll mercilessly attack opposing factions and battle for control of the clearings spread around the map.

Root isn’t only deceiving visually. If you hear about a war game and think it’s going to be some boring or dry game of chits and counters, you’ll also be pleasantly surprised. Let’s take a closer look at how Root plays.

Root is an asymmetric war game for 2-4 players. It plays in 45-60 minutes and is best with 4 players.

Root takes a lot of inspiration from Leder Games’ previous title, Vast. Each player controls a unique faction and the setup and mechanisms for every faction is completely different. Unlike Vast, however, everyone has the same goal: score 30 points.

Most of the actions you can take are driven, in part, by a deck of cards. The cards come in four suits. Three suits match the clearings on the board—fox, mouse, and rabbit. There are also bird cards, which are effectively wild cards that can be used in any clearing. If you want to attack in a mouse clearing, you’ll need to be able to play a mouse, or bird, card from your hand.

The Marquise de Cats primarily score points through building structures around the forest. They must carefully manage their supply of wood and can select three actions every round. Their primary rival, the Eyrie Dynasty uses a programming mechanism to move their warriors around the map and attempt to place out their roosts as quickly as possible.

The other two factions—Woodland Alliance and the Vagabond—are considerably different. The Woodland Alliance represents somewhat of an underground resistance movement. Cards are played to their board as supporters, allowing them to gain sympathy for their cause and hopefully start some revolutions throughout the forest. Finally the lonely Vagabond can move in the forest itself, not just on the trails, and attempts to trade and gain favor with other factions. This gives him items he can use throughout his journey.

Regardless of the faction you are playing, there are some common rules that everyone must keep in mind. When moving, you must rule (have the most warriors and buildings) the clearing you are leaving or moving to. You can also attack an enemy in a clearing you share. This is handled by rolling 2 dice (numbered 0-3). The attacker gets the higher number rolled and the defender gets the lower, and that is the number of enemy pieces that will be removed from the board.

Although everyone scores points in a way that is unique to their faction, everyone can also score points by removing tokens of other players or crafting cards from their hand.

Asymmetric powers in games are often praised for giving players a unique perspective and allowing for a variety of strategies to emerge. Vast took it to the extreme where players weren’t often even interested in the same things. Root dials that back a bit, giving everyone at least similar goals but completely different ways to accomplish them.

The Cats and Eyrie are the most similar, primarily scoring points based on the number of buildings they are able to construct. But the Cats get a set number of actions every turn and have to carefully manage their wood resources while still recruiting enough troops to survive battles with other factions.

The Eyrie, however, takes a variable number of actions every turn. They pre-program their actions and must continually add to it. However, it is possible they can’t take an action they have programmed. For instance, if they programmed a mouse card in their “battle” action—but there are no enemies in mouse clearings, they won’t be able to take that action. Worse yet, whenever they can’t take an action they go into turmoil causing them to lose points, change leaders, and reset their programmed actions.

Woodland Alliance and Vagabond are altogether different from those and from each other. The Alliance is still largely fighting for control of the map but just by underhandedly sneaking sympathy onto the board. And the Vagabond just wants to be friends with everyone… until it’s more valuable for them to make you an enemy.

Every faction has been fun to play and, unlike Vast, isn’t too difficult to pick up a new faction once you’ve learned any of them. The common rules stick in place for everyone and the player boards do an amazing job of spelling out exactly how your faction operates.

Root feels very much like a war game. It uses mechanisms from the COIN series of war games and gives them a beautiful game that is both accessible and fun to play. There is, of course, a lot of meanness involved here as you are essentially directly attacking your opponents. There’s Woodland bloodshed aplenty here.

One thing Root definitely does is reward strategic planning and strong tactical decision making. Players cannot hope to be successful by only focusing on their own plans but must also see how they can ruin those of their opponents. Keeping an eye on the Eyrie’s “program” so you can force them into turmoil or attacking the Vagabond to keep his number of items in check is necessary to stop them from running away with the lead.

There is little to complain about for me with Root. Overall it’s everything I wish more war games were. It’s beautifully produced, has just the right amount of randomness with the card deck and dice—enough to keep you on your toes and have a contingency plan but not enough to negate your planning.

The rulebook and player aids in Root go a long way in making the game incredibly accessible. The factions have all been interesting and fun to play while feeling different enough to keep the game feeling fresh even after multiple plays in a relatively short time span.

If there is a praise I can give Root I’m not sure there are any higher than this: Everyone I’ve played with thinks one faction is overpowered, but no one agrees on which faction that is.

Final Score: 5 Stars – An asymmetric game of woodland war that will appeal to a wide array of gamers.

Hits:
• Each faction is both fun and unique.
• Rules overhead is way less than you’d expect considering the gameplay is different for all players.
• It’s darn cute.