We review Detective: A Modern Crime Board Game, a new investigation game published by Portal Games. In Detective, players must work together to solve a series of linked cases use their brains and tools available.

Note: This will be a spoiler free review of Detective: A Modern Crime Board Game 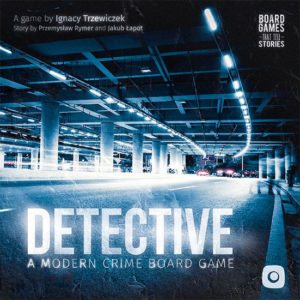 The investigation genre is not a new concept for board gaming. These episodic games started back with Sherlock Holmes Consulting Detective and have since branched out into a variety of games (Mythos Tales, Time Stories, and even House of Danger).

Recently, Portal Games (Imperial Settlers, Neuroshima Hex) has released their own investigation game called Detective: A Modern Crime Board Game (here after simply referred to as Detective). As the title might suggest, Detective takes place in the modern era and not only will you be sleuthing with a deck of cards, but you will actually be using the internet in your search for answers. Is this kind of modern integration good for the game or a needless distraction? Let’s find out!

Detective comes with 5 cases in the box, each of which is linked together over the course of a campaign (note: this is not a legacy game). Learning to play is fairly straightforward. Each player controls a character with a skill token and a special ability. For lower player counts, consultants are used that only provide 2 skill tokens.

Once players are setup and logged into the web app (called Antares Database), the casebook will give them the setup and backstory for their case.

For the game play mechanics, each lead you want to investigate will cost you time, usually ranging from 1-3 hours. Once the end of the work day hits (8am-4pm), any further actions will cost you overtime, which gives players stress markers. Too much stress and the game ends prematurely. The investigators then head out to the local pub to drown their sorrows in booze I imagine.

Leads are usually followed by pulling a 3 digit numbered card from the deck. Some leads will let you “dig deeper” by spending a skill token, which are one time use during the scenario, to get even more information. However, not every lead, or even digging deeper, will provide useful results. Red herrings abound! Often players will gain information from lead cards that they can plug into the Antares Database in the form of personal files, transcripts, and other pieces of evidence. The database will keep a record of everything you’ve read during a session in case you want to come back to it later.

Players will follow leads, usually in a variety of directions, until they’ve run out of time. The game ends with players giving their final report. This is handled via a multiple choice questionnaire in the Antares Database. Once filled out, it will give you your final score and let you know if you did well enough to win the case.

I went in to playing Detective expecting it to be another book-like game along the lines of Sherlock Holmes Consulting Detective or Legacy of Dragonholt. Games where you read a lot, follow leads, and are mostly along for the story. Yet, by the end of my first game, I realized that my expectations were really off base with Detective.

The big thing to know about Detective is that it’s a game of limited information. You just don’t have enough time to investigate every lead you come across. As an avid video gamer who will follow literally every side quest available to him before advancing the main storyline, this was very hard for me to accept. During the first case, I kept thinking that I had no idea how this game was winnable as I had so many unfollowed leads!

But eventually it dawned on me that in Detective, you have to use your intuition and “gut.” Not every lead is worth following and in the end, you’ll have to connect some dots on your own. More than once I angrily wasted time on a lead that wasn’t worth following. But that’s OK because the game smartly ends with a multiple choice questionnaire. You can still use your best judgement, based on the information you do have, to answer the questions even though you don’t have all the concrete evidence you’d want. I thought that this was a fantastic design decision that works well with the limited information of the game. I assume only in TV shows do cases wrap up perfectly neat.

Speaking of theme, Detective does a lot to keep you immersed into the game. The mechanics are simple to learn and almost never get in the way of the gameplay. Over time it just becomes about the story and the investigation as the mechanics will fade into the background. While I love Time Stories, the die rolls really break the theme and immersion there.

And then there is the Antares Database. Some people still scoff at using any kind of technology in their board game (which they really just need to get over and embrace the greatness of it), but the database in Detective is a big part of the charm of the game. I felt like a real detective following leads, matching evidence, reading personal files and interrogation transcripts (which even show the stress level of the person talking). One link will often lead to another, letting you follow a breadcrumb trail of clues.

Another interesting thing about Detective is that certain pieces of information are marked with a “wifi symbol,” meaning you can do your own research on them. Google, Wikipedia, Google Maps, etc are all fair game. In one scenario, I spent a good amount of time browsing streets and rivers in Virginia looking for information.

There are even some “ah-ha!” Moments in the database when you are matching evidence. Fingerprints and DNA are handled via an 8-digit code. When input, it lets you know the match strength to other pieces of evidence that you’ve already found. So that soil sample you are analyzing is also found on the shoe of someone you know was up to no good and now you have proof! Moments like these are a ton of fun.

Finally, the five cases in Detective are played out over a linked campaign. While you can play with anyone for any of the games you really are going to want the same group as one case leads into the next. The story definitely gets more interesting as it progresses, however I will admit that there is a LOT going on in the story. My only gripe here is that if you take time off from the game, there is not much in the way of a refresher for what happened in the past cases. Players will need to take copious amounts of good notes.

Detective: A Modern Crime Board Game manages to take an underused genre and really take it into an exciting new direction. App integration always runs the risk of being a distraction or novelty instead of improving the game. Yet in Detective, it not only works beautifully, but it helps immerse you even more into the theme than the game would without it. The story line of Detective is pretty intriguing and I really appreciated how not every case played out in the same way. They really throw you some curve balls, just wait until you get to case 3, easily my favorite!

I should warn you though that Detective can be a real brain burner with lots of leads, names, and clues to remember. You definitely don’t want to play when you are tired or distracted. You need to be well organized and pay a lot of attention to detail if you hope to solve any of these cases. However for an investigative game, there isn’t a better tabletop experience and I can’t wait for more cases to play!

Final Score: 4.5 Stars – A great investigation game that immerses you in the theme and never lets the mechanics get in the way.

Hits:
• Highly thematic
• Great use of the app integration
• Nice variety in the cases
• Mechanics never get in the way

Misses:
• Could use a better refresher between cases
• Really need to play all 5 cases with the same group