We review Wildlands, a new skirmish game published by Osprey Games. Wildlands was designed by veteran euro game designed Martin Wallace and is a great entry level skirmish game for newcomers to the genre. 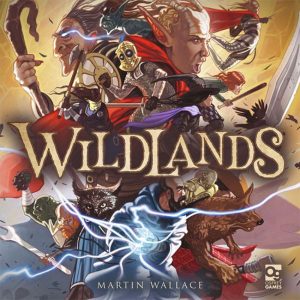 While I really enjoy playing skirmish games, they are also a genre that rarely gets to my table. This is mostly because skirmish games tend to have a lot of overhead, either in having a thick, complex rulebook or having an expensive buy in (I’m looking at you Games Workshop). Osprey Games seems to break that mold by giving us a skirmish game that not only is quick to jump in and play, but was designed by veteran euro game designer Martin Wallace (Brass, A Few Acres of Snow, Age of Steam).

Wildlands is a skirmish game for 2-4 players that takes about 30 minutes to play. Wildlands plays well at all player counts.

Each player in Wildlands controls a semi-unique faction of 5 heroes. There are four factions included with the game, and they mostly differ (other than art and minis) in how they approach the game. For example, the Pit Fighters are all in your face melee fighters, while The Guild are spell slinging wizards to who have lots of ranged and area attacks.

The goal is to be the first player to five points. You earn a point by collecting one of your crystals from the board, or killing an enemy figure.

The whole game is powered by cards in a players hand. Every character has a symbol, and if their symbol appears on a card, that card can use used to activate that character, either to move or take an action. Movement is simply to an adjacent space, while actions usually involve attacking (either melee or ranged). A player can also discard three cards bearing a characters symbol to have them pick up a crystal from their space, earning them one point.

Attacks do one or two points of damage (depending on the action played) and can be blocked if the defender plays a block card in response (as long as it has the character’s icon).

The other thing you should know is about interrupts. After any action on a player’s turn, you can play an interrupt card to pause their turn and take as many actions as you want. However you don’t refill your hand after an interrupt, so it will leave you with less cards for your normal turn.

At the end of a players turn, they draw 3 cards (no matter how many they played) and then the next player takes their turn. Player continues in this manner until someone collects 5 points and wins.

The thing I absolutely love about Wildlands is how easy it is to get to the table. I can explain the rules to someone in about five minutes, which for a skirmish game is fairly rare. This is because rules are both intuitive and streamlined. Move here, attack there, pick up crystal, it all makes sense. And since there are no dice, players have a lot of control over their attacks. Sure, they can be blocked, but your opponents will have to decide if it’s worth cutting down on the actions on their turn. You can also play some mind games, sometimes I’ll play the weaker attacks to try and draw out blocks, and then hit them with the heavy attack when they are low on defensive cards.

The cover and line of sight rules in Wildlands are also very smart. Every square is a number in a circle. If the circle is dark, it means that square contains cover. You can’t shoot through a square with cover. If you shoot at someone in a cover square, they can play a cover card icon to block the damage (there are also regular ranged block icons that can also be used out of cover, but this essentially doubles your protection chances).

While the factions are not quite asymmetrical, I do like how they each has their own feel. In a 4 player game, The Guild can cause a lot of havoc with their area attacks. The Lawbringers are probably the most defensive faction with lots of ways to prevent damage. While each faction plays the game the same, their icon and deck makeup will alter how the player approaches the game.

One of the best things Mr. Wallace did, other then make the game so streamlined, was the interrupt action. Sometimes you can tell a player is gunning for you, and it can be rough to have to be on the defensive until it’s your turn again. With the interrupt, you can wait for them to move into your space, then unleash a pile of melee attacks on them, potentially wrecking their plans. This brilliant mechanic not only keeps player engaged when it’s not their turn, it opens up a world of strategic options throughout the game.

However, one area where the game could definitely be better is with the card design. Using a card for a move action doesn’t have an icon (just the icon in a characters shield), it would be better if it had a movement icon associated with it. But what’s worse is that each card features a character drawing from that faction. However, that character doesn’t necessarily have to be used with that card. I found that this created more confusion than not with new players and I ended up just telling people to ignore the card art.

The only other thing of note is the initial setup of the game could have an effect on how well you do at the start. Each player draws 10 numbered cards, and uses five of those to choose their character’s starting spots. It’s possible that all your cards are grouped up and you end up on the opposite side of the board of all your crystals. Yet you are drawing twice as many cards as you need for your figures, so you have a good chance to find nice diverse starting positions, but with some 40+ cards in the deck, luck will play a factor.

If you ever wanted to dip your feet into the skirmish genre, then this is the game for you. One purchase gets you four diverse factions, and a dual sided game board with different map layouts. Wildlands is very easy to pick up and start playing, with games being quick, and deadly. If you are a veteran of skirmish games, Wildlands might be a tad too light for your liking, however it could easily work as a filler game for you when you need a break from the tape measures and thick rulebooks.

For me, Wildlands is definitely staying in my collections and I look forward to trying out the upcoming expansions that have already been announced. This one has just the right amount of rules over head and strategy to allow it to hit our table often and still be entertaining.

Misses:
• Cards could be designed better
• A bad starting draw could put you at a disadvantage