We review the newest expansion to the 7 Wonders card game, Babel. 7 Wonders: Babel comes with two new ways to play your game of 7 wonders and adds a lot more player interaction to your game. 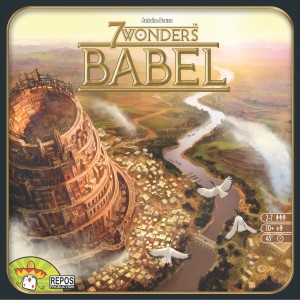 If you are reading this website then chances are you’ve heard of a little game called 7 Wonders. Designed by Antoine Bauza and published by Asmodee Games, this card game has won more awards than I can count.

Since 7 Wonders rocketed onto the scene in 2010, there have been 4 expansions for the game to date. Cities, Leaders, the Wonder Pack, and now Babel. Today, we are going to be looking at Babel, the newest expansion to this great game and also the one that changes up the gameplay the most. So let’s climb the tower of Babel and see what the view looks like from the top.

7 Wonders: Babel comes with two different expansions in the box. They can both be tossed into your game together or you can play with just one at a time. They also work just fine with all the previous 7 Wonders expansions.

The first expansion, and the one it’s named after, is the Tower of Babel. At the start of the game, each player is dealt out 3 Babel tiles. One tile is drafted into their hand and the others are passed to the left. This is repeated 2 more times.

Each player now has a new action they can take on their turn. Discard a card and build one of their 3 Babel tiles. When you build a tile, it gets built onto a shared tower board. Once a tile is built there, all players are affected by that tile’s power. However, only 3-4 tiles can ever be active at one time (depending on the player count), so the 5th tile will end up covering the first tile played, and so on.

Tiles have a range of effects from providing free resources to taking away special powers of cards to forcing players to build cards with coins instead of resources.

Each player also gains VPs for building tiles at the end of the game.

Each Great Project provides a bonus to all the players that helped build it if it’s competed by the end of the age. However, if the Great Project is not competed, everyone that didn’t contribute to it suffers a penalty.

The bonuses range from free coins, military tokens, free buildings, or free science symbols. It’s all good stuff. The penalties are much worse though. They range from a player losing all their coins, being forced to destroy a building in their tableau, or losing the use of their wonder resource.

I should also note that there is only an amount of Great Project tokens as the number of players, minus one. So there will always be at least one person that can’t contribute to the project (even more if a player contributes more than once).

One of the main goals of the Babel expansion was to increase the interaction between players that aren’t direct neighbors. With that in mind, I’d say Babel was a success. The Tower of Babel can have a huge effect on the state of the game. Being denied the ability to use cards you played, or conversely, getting access to free resources can really affect every player at the table. There have been countless times I can’t build a card because neither of my neighbors decided to build that one resource I need.

The Tower of Babel can also cause players to start working together. There have been times when someone has built the Babel tile that stopped players from using their commerce (gold) buildings, at that point the other players worked together to quickly build over that tile.

So in that way, the Tower of Babel was a success. Player interaction was definitely kicked up a notch. However, one down side of this new pile of interaction is the extra weight it adds to the game. 7 Wonders has always been a little symbol heavy and the Tower of Babel adds an entirely new group of symbols for players to learn. During tile drafting, expect to be passing around the rule book until people get a feel for what all the tiles do. Also, as soon as a player builds a tile, everyone needs to be introduced to the new effects. With that in mind, this is definitely not an expansion that you’d want to introduce to new players.

The Great Projects expansion on the other hand almost feels like the opposite of the Tower of Babel. It’s much easier to incorporate into the game because only one project is dealt out each age. Its effects are static, so at the start of an age you can quickly explain the parts of it and get on with the game as normal. However, the Great Projects do feel a little less epic in scale than the Tower of Babel does. Perhaps is because the rewards or penalties for the project don’t happen until the end of the round.

The nice thing about Great Projects is that player’s don’t have to spend an action to contribute to the project. To use the Tower of Babel, you have to discard a card as your action. This can be useful when you get that hand of crappy cards, but many times playing the tower piece will be sub-optimal to playing a card into your tableau.

One of my benchmarks for a great game expansion is if it adds variety to a game, without adding too much complexity. I like my expansions to seamlessly integrate into the game without having to feel like I’m learning a whole new game. When you look at Babel in this light, I’d say the Great Projects fits the bill perfectly, while the Tower of Babel…not so much. That doesn’t mean I don’t like the Tower of Babel, I just think I’d only add it to a game where everyone was a really seasoned 7 Wonders players. Overall, I like the interaction it provides, but it does slow the game down some.

There has always been a lot of debate over which of the two main 7 Wonders expansions (Cities and Leaders) is the best. I’ve always fallen into the Cities camp. I love how easy it integrated into the base game and how much variety it added to the game play. While Leaders on the other hand always felt a little clunky to me. So where does Babel fall? It’s probably not a required expansion, but I still really enjoy playing with it.

I think that 7 Wonders: Babel did a great job of addressing on of the few “flaws” in 7 Wonders. For people who wanted more interaction in the game, or an option to be nasty to your fellow players, then this one is for you. And Babel can be really nasty at times, be warned. If you didn’t like the broken coin symbols in 7 Wonders: Cities then you probably won’t like playing with Babel.

For the rest of us though, Babel can add a lot of variety to your 7 Wonders game. While I probably won’t play with Babel every time I pull out 7 Wonders, if I’ve got an experienced group who has many plays under their belts, you better believe we’ll be climbing that tower of Babel.

Hits:
• Adds a lot of interaction to the game
• Adds even more variety
• Great Projects easy to incorporate

Note: if you’d like a copy of the player aid for 7 Wonders: Babel I designed, you can download it here.