We review the Steam version of Terraforming Mars. This award winning board game has made the jump from our tabletops to the digital realm and you can now play Terraforming Mars on Steam vs other players or the AI. 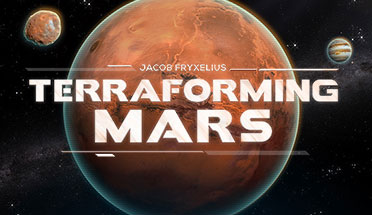 I love Terraforming Mars…mostly. It’s point salad-y goodness with a dash of strategy and a sprinkle of economic management tossed in for good measure – a mix of all my favorite mechanics. So what’s not to love? The player board. The player board is a hot mess. Forged in the heart of Mount Doom to try the souls of the human race. Think I’m exaggerating? You’ve never played the “Oh no, my player mat shifted and I can’t remember where any of my markers were,” game.

A custom insert helped with the physical copy, but as soon as I heard that there’d be a Terraforming Mars app, I knew this was definitely one tabletop game I was happy to try into the video realm.

Terraforming Mars is an economic building, resource management game for up to 5 players and includes several AI.

In Terraforming Mars, players are in charge of corporations tasked with improving the planet in order to make it habitable. To do this they’ll manage resource gathering while buying and playing a hand of improvement cards. Actions are performed over a series of rounds, which allows players to accumulate resources and affect changes.

Each round players take turns performing two actions. These include the ability to play a card, activate one already out, choosing from one of the six standard projects (such as selling a cards or building cities) or claiming a milestone or award to contribute to endgame scoring. After two actions are taken play moves to the next player, and continues like that until all players pass.

Players will increase oxygen and temperature on the planet through their actions, eventually making the planet habitable. Oceans, greenery, and cities will be added, and figure into players final scores. Resources are generated once a round and used to fund more building and projects.

Once all ocean tiles are played, and the two tracks (oxygen and temperature) max out, the game ends. All players get one more round to plant forests, then scores are tallied. Highest victory points wins.

Despite knowing how to play from the tabletop, I let the app walk me through a tutorial game before launching a full one. It’s a nice enough tutorial – a general overview of how things work, and what they mean as well as the action a player can take. I immediately followed with a game versus the standard AI.

It wasn’t a challenging game, but I didn’t start with that expectation. Unfortunately, I can’t say if the AI had a cohesive strategy because the cards it was playing (usually an indication of what their strategy might be) were flashed up on the screen too quickly to read. Additionally, if the text runs off a card you’re choosing, well, maybe you can tab out and find it online to read completely.

Ironically, while card play is far to quick, the rest of the AI turn drags out. I don’t need every resource gain and card sold animated. I’m also not an enormous fan of having to click end turn every time I’ve taken my two actions. The AI is also referred to as ‘he’ – I’m pretty sure the AI doesn’t need a gendered identifier…

That aside, there’s a lot of great streamlining here as well. For starters – my resources and the counter of how many I receive each turn can’t be jostled any time I reach across the table. I appreciate that the ‘draft cards’ mechanic doesn’t exist in the app – you get a set to choose to buy at the start of each round. The graphics are much prettier than the base game itself. And there’s a lot to be said for the ability to start playing with the click of a few buttons instead of after 20 minutes of set up.

While some may argue that there’s nothing like the tactile feel of an analog game, there’s absolutely a time and place for apps that take that gameplay and improve the experience, Terraforming Mars is just such an app.

The Terraforming Mars app’s smart tutorial will have you playing in less time than it takes to set the analog version up. There’s no cheap player board to manage. UI is intuitive though the card display could use some work. The AI turns can stretch out though. Multiplayer is a snap to set up.

Misses:
• Card are displayed to quickly.
• AI could be more challenging.