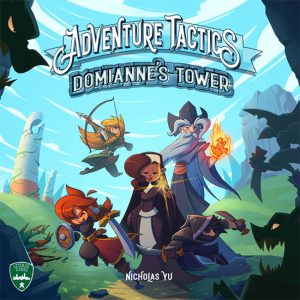 When the preview copy of Adventure Tactics dropped down on my gaming table, there were quite a few surprises from what I had expected. First, the whole who prototype smelled like a campfire (thanks to the Game Crafters print on demand process), but more importantly, the game featured some enticing artwork and a very large amount of cards. I didn’t count the total, but the rulebook says 800 of them and I believe it. OK, interest piqued, it was time to check out the gameplay.

Adventure Tactics is a campaign driven, dungeon crawler for 2-5 players. Each player begins the campaign with a hero (or two if playing with less than 3 players) based on classic fantasy classes; fighter, wizard, rogue, cleric, or archer. Players also get a hero board that houses their character components: class card, abilities, features, weapons, etc.

There is a separate campaign book that is broken down into scenarios. Right from the start, players have to make a choice on what their first quest will be. The narrative gives players two options (in our prototype, Goblins were attacking the village): guard the gate or investigate an alarm. Depending on which mission you choose, the campaign book will give you the monsters setup and any specific mission rules.

Every scenario has both a goal (IE: kill the goblin leader) and bonus goals (also kill all the minions). The specific results of completing or failing a mission are kept hidden until the mission is complete.

For the actual gameplay, Adventure Tactics is fairly streamlined and easy to learn. Every character and boss has an initiative card, which are shuffled and dealt out into a line at the start of every round. When a player’s card comes up, they can take two actions:

Attacks are handled via dice rolls, with the number of icons rolled being the amount of damage done. There are no defense rolls or misses, however players will eventually get items and abilities to help them mitigate hits.

Monsters are handled via a boss deck. Every mission has a boss and the deck will determine which monsters activate and what they do. Usually it has the monsters attacking specific heroes using the same type of dice rolls.

Missions end when either the goals are accomplished or all the heroes are dead.

Between missions, the campaign guide will sometimes tell players to level up. A player can either take a deeper level of their current class, or multiclass into one of the other base classes. Interestingly, characters can eventually take levels in elite classes. For example, once a character has two levels of rogue, they can take their third level of rogue, or branch off and take a level of Assassin instead.

Despite the glut of dungeon crawlers on the market, I was actually quite impressed with Adventure Tactics. Previewing a Kickstarter prototype area always hit or miss as games are sometimes in various states of completion. Yet Letiman Games was able to put together a really solid offering here.

I appreciated the streamlined nature of the game play when it comes to the dungeon crawl. Movement and attacking are very straight forward and driven by the cards in a players hand. Every character starts with a similar deck of basic attacks, basic moves, and a couple of class cards. As they level up, players will start to not only get more unique cards in their deck, but also passive abilities and weapons/armor.

Which brings me to one of my favorite parts of Adventure Tactics, the character customization. I feel like there is a lot of room in here to make your character your own. From items you find or buy, to the various multiclasses, your character should feel pretty unique as you progress through the campaign. I especially liked the idea of the elite classes. They remind me of the 3rd edition DnD prestige classes. My prototype character took a level of fighter, then wizard, and eventually became a dark knight. I imaging that there were be a lot of room to explore different combos available as you build your character. The character customization is going to be a really strong draw of this game.

Going back to the game play, I will say that I wasn’t a huge fan of changing initiative every round. Rounds are fairly quick, so having to reshuffle and deal out the initiative cards each round was kind of a pain. Plus, it makes it much harder to plan your moves for future rounds if you don’t know when characters will be acting. I’m sure the designer had a reason for doing it this way, but I could see myself house ruling this one to build the line only at the start of battle.

Finally, I also thought the boss deck was a great mechanic. Going back to the initiative line, it was nice to not have to track every minion separately. The boss deck not only takes care of letting you know what each monster is doing, but determines who activates. This allows for some nice variety between battles. It’s not always “every monsters moves and attacks”, but you’ll get some where only specific ones act or they do something unique. Overall I was a fan.

I only got to play a few missions in our prototype copy, as this one only had about 14 total missions. I assume the final game will have a lot more options. But I found Adventure Tactics to be a really streamlined dungeon crawler with a great focus on character customization. The art is good, there are a lot of gameplay options, and combat is fierce and often. While story is enough to move the game forward without overloading the players with box text, I was more of a fan of the decisions allowing for the players to choose from options for their missions. Overall we enjoyed our time with Adventure Tactics and I’m really looking forward to seeing the final version of this one once its published.

Adventure Tactics launches today on Kickstarter, if you’d like to get a copy or find out more about it, head over to their campaign page.