Since its release in 2019, Marvel Champions has had a steady stream of releases from Fantasy Flight Games. While we’ve seen heroes from the Avengers, Guardians of the Galaxy, the Spiderverse, and even the Champions, notably lacking has been the fan-favorite X-Men. It has been long rumored that the X-men will be coming to Marvel Champions, especially after Fantasy Flight Games released X-Men Mutant Insurrection, a Marvel-themed reskin of Elder Sign. This tipped their hand that they also had an X-men license. Well, that day has finally come.

Marvel Champions: Mutant Genesis will be the next big box expansion for this Living Card Game (LCG). Here is the short of it:

“With this expansion, the X-Men are finally coming to Marvel Champions! Face off against the X-Men’s classic foes, such as Sabretooth, Sentinels, and the Master of Magnetism himself, Magneto. This expansion comes with five brand-new scenarios, and as with previous expansions, you can play each of these scenarios individually or as part of a larger campaign. With an extraordinary spread of new modular encounter sets, there will be ample opportunity to enhance all of your Marvel Champions games. Mutant Genesis also kicks off a new wave of playable heroes for the game, starting with two iconic X-Men: Colossus and Shadowcat, both of whom come with fully pre-built and ready-to-play decks right out of the box.“ 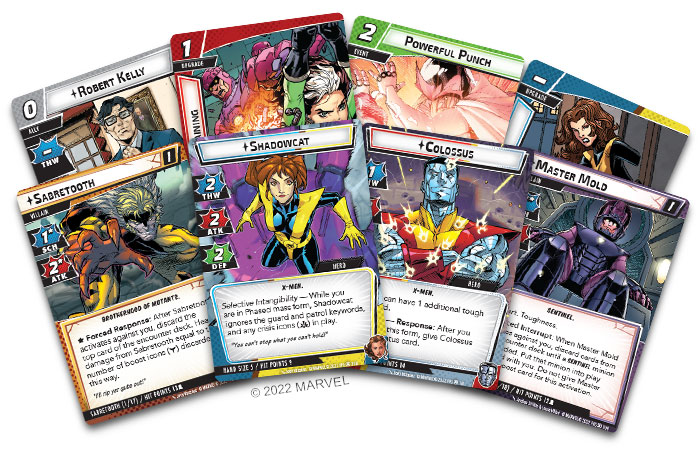 With Sabertooth, Master Mold, The Brotherhood of Evil, and Magneto himself headlining the box, it’s clear that Fantasy Flight is going all-in on their first X-Men release. I remember people’s lack of excitement over the core box lineup with snoozer villains such as Rhino and Klaw. While the box set only comes with two heroes, they will be also releasing two character packs at the same time. X-men heavy hitters Cyclops and Phoenix (Jean Grey version I’m assuming) will be available at launch.

Marvel Champions: Mutant Genesis is due out in September this year (with potentially an early Gen Con release) for a price of $44.99. You can read more details on the cards and what’s coming in Fantasy Flight Games’ news post.