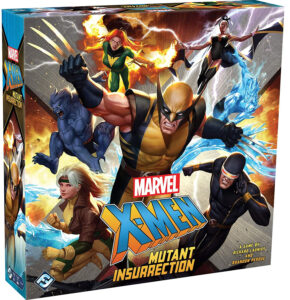 In my youth, I was addicted to the X-men. From the Saturday morning cartoon to the Jim Lee run in the comic books, I couldn’t get enough. And even today, I still ready many of the X titles on Marvel Unlimited. So, when Fantasy Flight Games sent over a copy of their new dice rolling game, I eagerly snatched it up. X-Men: Mutant Insurrection is a reimplementation of their hit Lovecraftian dice game Elder Sign. So, grab your yellow spandex as we see what makes this one tick.

Each player in X-Men: Mutant Insurrection will control one of 16 icon X-men characters. Players will also choose one of the 8 scenarios to play, all of which were inspired from the pages of various Marvel comics. These range from a clash with The Brotherhood of Mutants to tangling with the Hellfire Club.

Each round takes place over four phases. First, in the Deploy Phase, players decide which X-men is going to which mission, with up to three mutants at any location. Once decided, players move on to the Mission Phase where each X-man there can attempt to satisfy the objectives of the mission.

To attempt a mission, a player will roll 6 dice (three different colors of dice), decided by their character cards or an assist card given to them by another X-man at the mission. If a player is assisted, two of their dice are swapped out for the ones on the assist card, and they also gain an additional special power as well.

Dice are then rolled with the goal trying to match symbols on the lines of the mission card. The player can reroll the dice three times without any adverse effects unless the mission has a Villainy effect, which will trigger if any of the rerolled dice show Magneto’s helmet (this might cause a health loss, as an example). Some missions might have extra tasks depending on the position of the Threat track (3 levels) or if a Sentinel was placed there.

If the players beat all the lines of the mission, a reward is handed out to the players there. If, after a player is finished, there are still objectives to be attempted, any other players at the mission can then try. Once all players have had a turn, if the mission is still not completed, the players there suffer the failure penalty and can try again on a future turn.

Once the Mission phase finishes, the game moves on to the Threat phase, where the threat marker is increased for each threat icon showing on active missions. Then more missions are revealed, and a crisis card is drawn. These are always bad and get worse as the crisis tracker moves up its track.

The overall goal is to advance the plot cards. These will be mission-specific, but usually involve beating certain missions or villains throughout the game. Players can even look forward to a few mini-narratives interspersed throughout the missions. As players work their way through the plot cards, they’ll eventually end at a Final Showdown. This is a multi-turn battle with 2-4 mission cards that require the heroes to defeat them all or die trying.

Despite my overly verbose gameplay overview, X-Men: Mutant Insurrection is a surprisingly streamlined game. Even though there are a bunch of special powers, mission effects, crisis cards, extra mutants, bonds, and plot cards, it really is simply: pick a mission, roll some dice, try and match symbols. That’s not to say that this game is just reskinned Yahtzee, there is a solid amount of depth here. We had a nice amount of discussion during the deploy phase of each mission.

This is due to not only hero powers, but that there are three different types of dice. I appreciated that the dice were broken up into 3 different types, each of which favors one of the game’s icons. This prompted decisions where we would discuss which X-man to send where based on how their dice were distributed. Throughout the game, your hero can also acquire bonds with other heroes (or have them broken for detrimental effects) that give you bonuses for being at the same mission. So, the decision of which mission to attempt and who to send there wasn’t always that obvious.

And that’s also one of the things I like about X-Men: Mutant Insurrection, how much it uses its cooperative nature. This isn’t a game where one hero can load up on powers and take over the game. Most of the heroes are pretty balanced, and at most, you are getting a bond and a mutant sidekick (these are mostly b-listers not worthy of being a hero). So, you’ll almost always want to be tackling a mission with another player, just to get their assist bonus and also to make sure you have enough dice to complete it.

However, that also brings me to one of my main complaints about the game. The player scaling just isn’t that great. X-Men: Mutant Insurrection works best when you have other heroes at a mission for all the reasons listed above. When you are down to just two players, the game loses some of its charm. Therefore, after our first 2 player game, we played every other game at that player count two-handed. Controlling two mutants wasn’t any harder than one, and you got a lot more flexibility in missions and assists. But if you are a “play as the rules are written” type of gamer, then you’ll want to avoid this one unless you have at least 3 players.

My only other gripe with the game is that the rulebook could have been better. Quite a few times we found edge cases that weren’t clear, and we had to hop online to try and figure out what we were doing. Also, there weren’t enough plastic stands for all the X-men, so you must pop them off and, on the standees, which is kind of annoying.

Finally, for those looking for a comparison to the game this one is based on, Elder Sign, I’ll touch on that briefly. In my opinion, X-Men: Mutant Insurrection is a much better game. Elder Sign had a few issues that caused it to eventually leave my collection that X-Men: Mutant Insurrection improves upon. One, the dice mechanic is X-men is much better. Elder Sign uses an attrition system where you lose a die after each reroll, which eventually made tasks impossible. It also, for the most part, had dice that were all the same. X-men’s Villainy and colored dice system not only makes things feel less at the whim of randomness but also keeps every roll more interesting.

The other area where it stands out is in player interaction. In Elder Sign, a player could get lucky enough to gain a bunch of items and spells and basically take over the game. The other players would have to count on them to win it. Things are much more even-handed in X-Men: Mutant Insurrection, where all players feel on equal footing throughout the game.

While not perfect, X-Men: Mutant Insurrection was really enjoyable for us. The first time we played it, we immediately set it back up and give it another go with a different plot card, which increase in difficulty as you get further into them. The game is light, streamlined, and super easy to get to the table. While the mechanics aren’t wholly new, they work well and, in my opinion, this is a much better evolution of the Elder Sign system (at least the core game). There is a large lineup of X-men heroes, 8 different plot cards, and other game effects that also give this one a lot of replay value. You’ll be able to get X-Men: Mutant Insurrection to the table quite often and have it still feel a bit fresh. That’s not to say I wouldn’t take some expansions if FFG is so inclined.

Misses:
• Two players will want to play two handed
• Rulebook could be better