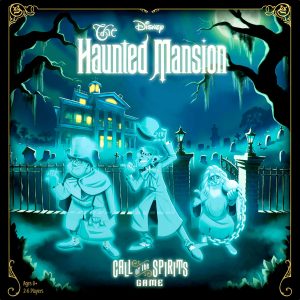 Your neighborhood friendly Disney nut is back. Tony was kind enough to allow me to review another board game based on a famous attraction at Walt Disney World (and other Disney parks). This time it is for my FAVORITE old school ride—the Haunted Mansion!

Similar to the Jungle Cruise Adventure, which I previously reviewed, I know this game will be family-friendly and lighter than games I usually enjoy, but I LOVE this ride and, honestly, I think there is more design space with the Haunted Mansion theme compared to the Jungle Cruise.

Here are my thoughts on The Haunted Mansion – Call of the Spirits.

The game is played over multiple rounds. A round consists of two phases:

After the round is completed, the 1st player marker is passed clockwise and the next round begins.

The game ends randomly based on when the final round event card is drawn (it is shuffled in with the last three event cards). Players add up their ghost collection; however, the player who collected the highest haunt value (each haunt card is valued between one and three) must discard their largest set of ghosts based on their type, NOT value. Whoever collects the most points is the winner.

Wow. I liked this game more than I thought I would. I know that a pure set collection game does not sound exciting, but the way the sets are collected is what makes this game unique. You can either move to a room to collect a ghost, or you can rotate the endless hallway. The advantage of the rotation is that you can get to any room you want at the cost of one action; however, you will also be moving all your opponents who are in the hallway as well. This may benefit them as much, or more, than you. I really enjoyed the puzzle of determining the best way to get the ghosts I need while assisting my opponents as little as possible.

I also enjoyed the different functions and point values that the ghosts had, especially from a thematic point of view. Some sets score exponentially more based on the number you collect from that set (the Musician Ghosts!). Some only score in pairs (the Dancing Ghosts!). Some allow you to discard a haunt card. While others make you draw a haunt card. They also included well known Haunted Mansion ghosts as unique Special Ghosts. Madame Leota or The Bride may not be worth much on their own, but they combo well with other ghosts.

The haunt cards and dueling action were both designed to add risk in collecting ghosts and prevent runaway leaders. My initial impression of these two mechanisms was that they would be detrimental to my enjoyment of the game. In practice, they IMPROVE the game, and I am glad I overcame my initial concerns.

The Hitchhiking Ghosts like to hand out haunt cards. They give them to you when they move past you or land on your room if you are in the endless hallway. If you want ghosts in the room that the Hitchhikers are currently occupying, BAM, another haunt card for you. I really liked this mechanism because a) I LOVE the Hitchhiking Ghosts and, more importantly, b) the threat of haunt cards might cause you to rethink your ghost collecting strategy.

That being said, having the most haunt cards does NOT mean you will lose the game. It will be more difficult to win as you will have to discard your largest set of ghosts, but not impossible. We had a couple of games where the player with the most haunt cards won by strategically acquiring a large set of low-value ghosts.

Dueling is also more fun than I thought it would be. You simply have to be in the same space as your target, announce which ghost card you are targeting, then the duel can commence. Both players use a bidding dial to secretly bid how many haunt cards they are willing to draw, between zero to three, to keep/steal the card. Bids are revealed and the player with the larger bid keeps/takes the card (ties go to the defender). BOTH players must draw the number of cards they bid, not just the winner. This lead to many interesting duels, several where the dueler simply wanted to scare the defender into taking three haunt cards after they revealed their zero bid!

My last reason why I liked this game is tied to how well this game works as a gateway game, especially for younger gamers. It is easy to teach and plays quickly, important characteristics for a gateway game. At the same time, it teaches strategic thinking, and how to analyze opponent strategies, great teachable moments for aspiring gamers!

I only have two issues that prevent me from recommending this game to everyone. The first is the dueling mechanism. This introduces direct conflict in an otherwise family-friendly game. Some players may not deal with it well and, while it could be ignored and not included in your game, removing it would eliminate the easiest way to stop a runaway leader. The second issue is that the theme really increases the enjoyment of the game. While that is not an issue for me, it might be for people who are not familiar with the source material. I enjoyed moving the Hitchhiking Ghosts because they are the Hitchhiking Ghosts, while, for Tony, he was just moving “the ghost miniature.”

I was surprised by how much I enjoyed playing the Haunted Mansion – Call of the Spirits. It is very entertaining for such a simple concept: collect sets of ghosts. The rotating hallway, different ghost cards, the Hitchhiking Ghosts, and the potential for duels all added enough complexity to engage the seasoned gamer while not being too complicated for a family game. The way the art and components tied the game to its IP is the cherry on top. If your family loves The Haunted Mansion, this game is a no brainer!

Hits:
• Theme will really appeal to families that enjoy the Haunted Mansion attraction
• Set collection and haunt designs are enjoyable
• Great components and art
• Good for introducing younger gamers to more complex game mechanisms such as set collection and planning/strategy based on opponent’s actions

Misses:
• Dueling mechanism may “haunt” younger players
• Theme really adds to the enjoyment, so if you do not enjoy the Haunted Mansion, you may not enjoy the game as much