We review the Jungle Cruise Adventure Game, published by Ravensburger. In this game, players are exploring the review based on the world-famous Disney World ride. 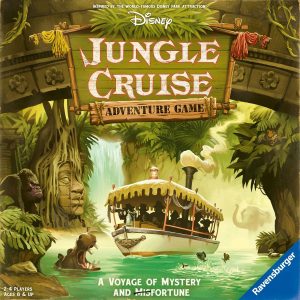 I will admit it. I am the resident Disney nut. We try to go to Walt Disney World at least once a year to relax and enjoy time together as a family. And yes, contrary to popular belief, Disney vacations can be relaxing, but that’s a separate article, and you did not start reading this for vacation tips.

So, was it a good game or a BORED game (yes, the beloved, or hated, Jungle Cruise puns and wordplay are ever-present in the game)? Here are my thoughts.

Jungle Cruise Adventure Game is a roll and move, set collection, and race game in which you are a skipper trying to impress Alberta Falls, owner of the Jungle Cruise Navigation Company.

The game is played over multiple turns. A turn consists of 4 phases:

After a player completes their turn, play continues in clockwise order.

Players are competing to be the first to reach Headquarters while picking up the most valuable cargo and passengers. Once a boat reaches HQ, the player collects Tips instead of taking a turn. The game ends when the final Tip token is taken from Headquarters. The skipper with the most points is declared the winner.

This was a difficult game for me to review because it is the lightest game I have reviewed for BGQ. This game is targeted for families, not experienced gamers. I will cover both audiences in my review.

I will get this out of the way—for experienced gamers, unless you have an enormous love for the Jungle Cruise, I do not think you will enjoy this game long term. If the theme was moving product down the Rhine river instead, I would not have been interested in this game.

Why is this not a great game for gamers? The deduction aspect is too simplistic. One of the four available families (the passengers are all members of one or two of the families) will run the Jungle Cruise Navigation Company while Alberta takes a vacation, with members of that family worth the most points at the game’s end. Four Clue tokens, one for each family, are placed on the board during set up, with one placed on the HQ representing the family that will take over, and the other three are placed in Clue spaces along the river’s path. In addition, the Clues are always down a branching path that is longer. If a player stops at a Clue space, they can look at the Clue token and know one of the families that were NOT chosen.

We simply copied what a player did after looking at a Clue. If they discarded a passenger from a family or moved them to the center of their boat (the safest section), we did the same. In fact, in future games, no one pursued Clues. Had there been other variables, it might have been meaningful, but because there are only 4 options, it did not feel like much of a deduction.

Another aspect that drove my gamer side crazy was the lack of bad roll mitigation. While low rolls are offset with less risk, there were times when I wanted to roll higher to get to an Outpost (spaces where cargo are picked up, first come first serve) before another player but could not because I rolled three ones in a row. I would have liked the option to toss a passenger overboard to speed up my boat!

As for families with younger gamers, I think this is a great game to teach new game mechanisms. The deduction mechanism discussed above is PERFECT for teaching the concept of deduction. There is light set collection for passengers, as discussed above, as well as cargo (there are three types of cargo, and more points are scored for having a complete set of all three types). The movement of passengers and cargo on the boat teaches risk analysis, as does the Warning Flare, which can be used to reroll peril results. The game even provides six variable skipper powers.

My one hesitation is that younger children may have difficulty coping with the loss of passengers/cargo on peril results. I cannot speak to how it impacted our gaming as my youngest children are 15. They only cry when I take their phones away…

My last comment is on the components. I really liked them. The boat placards are big and easily hold the tokens. The board art includes scenes from the ride, as do the cards. Speaking of cards, each of the 80 navigation cards includes a unique pun, some from the ride as well as several puns I have not heard before.

I enjoyed playing the Jungle Cruise Adventure Game. We could reminisce about one of our favorite rides while playing a board game; however, I found the fun was more about the time together and not the gameplay itself. The Jungle Cruise Adventure Game did get repetitive after multiple plays. That being said, my family is not the target audience for this game. If you have children between the ages of 6 and 12 and are looking for a game that is more advanced than Candyland, I would recommend this game. If your family also happens to enjoy the Jungle Cruise ride, I would HIGHLY recommend this game.

Misses:
• Not as enjoyable if you have never experienced the Jungle Cruise ride
• Repetitive after multiple plays
• Deduction is simplistic
• Roll and move has no bad roll mitigation