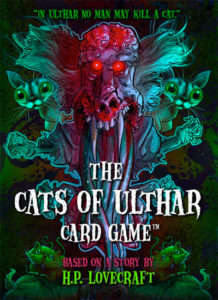 “It is said that in Ulthar, which lies beyond the river Skai, no man may kill a cat; and this I can verily believe as I gaze upon him who sitteth purring before the fire. For the cat is cryptic, and close to strange things which men cannot see.”
~ HP Lovecraft

The Cats of Ulthar is a 2 player press your luck style horror card game.

The game plays to a tableau in the center of the table. Players sit across from each other with the Cotter + Wife card between them. To each side is a spellcaster card representing the youngest and oldest players.

Players are attempting to surround their spellcaster card with cats, then finish off the cotter and his wife. Cat icons on each side of a player’s card illustrate which types of cards can be placed adjacent – colors and numbers should match. On a turn, players can lay a cat down around their card or attack an opponent. Counterspells maybe played. If a cat is killed, a card must be pulled and played from the Ancient Gods deck, likely affecting the attacking player or causing other twists.

After both players take their turn, then cotter and his wife get a turn! Cards from the Cotter deck are played. These cards usually directly target the players’ cats. Play continues until a player surrounds their spellcaster and lays a ‘kill’ card on the cotter and his wife.

Steeped in the style of horror only Cthulhu-style games can evoke, Cats of Ulthar is a deceptively simple pattern building game with art like something from a nightmare. Familiarity with text isn’t necessary, although it may help you understand the macabre theme.

While the base mechanics are simple, gameplay is anything but. Building a clowder of cats while attempting to ward off the spells of your opponent, and also the nefarious cotter and his wife, require planning ahead and good hand management. Whoever said your deeds will be revisited unto you surely had this game in mind – any time I thought I was getting ahead in my quest to hinder my opponent I found myself knocked back again myself.

If you’re planning on knocking out your opponent, beware the ancient gods. Their wrath is not just reserved for the cotter, but ANYONE who attempts to harm these cats. And just as you have the perfect strategy mapped out, the madness will give you a further twist, causing you and your opponent’s objectives to change hands.

“And in the end, the burgesses passed that remarkable law which is told of by traders in Hatheg and discussed by travelers in Nir; namely, that in Ulthar no man may kill a cat…” ~HP Lovecraft

As the ultimate Gothic horror cat lady, you’re encouraged to surround yourself with cats in The Cats of Ulthar. Macabre art definitely evokes the creepy theme of the story. HP Lovecraft or Arkham fans would find The Cats of Ulthar an interesting addition to their shelf of horrors.

The Cats of Ulthar is coming soon to Kickstarter. In the meantime, you can find out more information on the Gilgamesh Games website.