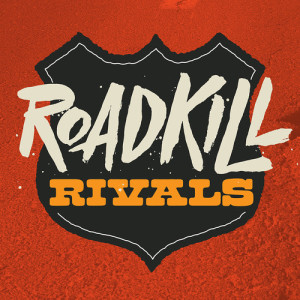 I am fortunate to live in New Jersey, wrongfully maligned by the entertainment-media complex to cause the rest of the country to think it’s a state filled with nothing but oil refineries, greased up beachgoers, and gangsters. This couldn’t be further from the truth: we have farms and forests and nature abound, truly fulfilling its nickname of the Garden State. Want to know what happens though when suburban sprawl meets the natural world? Road kill, and lots of it. I see it every day.

What does this have to do with Roadkill Rivals by Pygmy Giraffe Games? Not much, other than I thought it was a clever intro. Does Roadkill Rivals do a smash-up job, or does it remain a bloody mess for the vultures to eat up? Read on to find out.

Roadkill Rivals by Pygmy Giraffe Games is a card game for 2-6 players, that plays between 15-30 minutes. In our plays, we found that it played best with 3-4 players.

In Roadkill Rivals, your goal is to use a variety of vehicles of various strength and size to run over animals, the bigger the animal the better. You achieve this by playing vehicle cards with a greater strength value than the animal (or animals) you are running over, then you add those animals to your score pile. At the same time, you want to mess with your opponents plans by wrecking their vehicles. Special cards get played to provide powerful extra actions. At the end of the game, whomever has scored the most points is declared the winner!

There are three types of cards in Roadkill Rivals. Animal cards each have a strength value of 1-5, and are worth their strength value in points at the end of the game. Vehicle cards also have a strength value, but between 2-6, and they are needed to run over the animals. Roadside cards are special cards, providing powerful actions such as taking extra turns, wrecking opponents cards, scoring bonus points, and the like. At the beginning of the game, four cards are dealt into a community pool for all players to access, which gets replenished as players draw from it.

On a player’s turn, they take one of four actions. They can take a community card into their hand, which is kept face-up for all players to see. Hand size is limited by the number of ‘keys’ with most cards having a single key, topping hand limit at three cards.

Players rotate through, taking one of these actions on their turn until the last card from the deck is drawn, at which point all players place their hand in their scoring pile. All the point values of cards in the scoring pile are totaled up, and the player with the most points is declared the winner.

As someone who is usually in the position of teaching rules to my gaming group, I appreciate a simple and straightforward rule set. There is not much room for ambiguity in the rules of Roadkill Rivals, and it took less time to explain the rules than it probably did for me to type this article up to this point. Since this game is targeted to be short and sweet, we were encouraged by the fact that the game can hit the table, be explained to a bunch of newcomers, and started in less than 5 minutes.

Since all information regarding cards in-hand is open, there is some deceptively added strategy to Roadkill Rivals that isn’t necessarily noticed on first glance. In other games, you are trying to make your most optimal play, based on the information you have regarding your hand, your score, and the board state. In Roadkill Rivals, you have to add in the predictive aspects of guessing what your opponents’ plans are and attempting to work with, through, or around those plans. We found that this attempted prediction of opponents’ actions only added to our enjoyment of the game.

Like other card games with a single draw pile, there is an element of luck that comes into effect. Especially in two-player games, we found that there were times where a single player would go on a run of pulling especially valuable cards, both in vehicles and in roadside cards. This aspect, while annoying at times, is not a deal breaker for Roadkill Rivals, as the quick play time lends itself to absorbing a significant amount of randomness in the card draws.

If you have not figured it out by now, my play group loves to tell stories and create narratives around the games we play. Roadkill Rivals, while seemingly having a thin theme, gave us the framework to make up tales about a road trip across the country and the wake of animal destruction we left in our wakes. While it may not be the best theme if you are attempting to play with a younger member of the family, it is a good theme for teens and adults.

With two players, we felt Roadkill Rivals did not provide as much strategy and enjoyment in messing with your opponents’ plans, and sometimes one player would go on a run of amazing card draws. Even though turns move quickly, we felt that playing with 5 or 6 players left a little too much downtime for our tastes. Playing with 3 or 4 players was right in the sweet spot.

Roadkill Rivals provides a solid game in a small package, providing enjoyable and exciting gameplay in a short time span. With rules that are easy to grasp, and a lighthearted ‘take-that’ approach, this is a game that can be brought to the table as an in-betweener for your gaming group, or for a group of non-gamers who you are trying to give a new experience to.

We would go so far as to say that this game could be played by families with gamer children, as the rules are that straightforward, but we would leave it up to you to decide whether or not the theme would be appropriate. This is a game that should definitely be on your radar if you like quick and exciting card games.

If you’d like to become a backer, pledges start at $20 for the full game and stretch goals. Roadkill Rivals is scheduled to be in backers hands in December of 2015 and you have until Thursday, August 20th to become a backer. Head over today and check it out.