Board Game Review by: :
Jacob Daneman 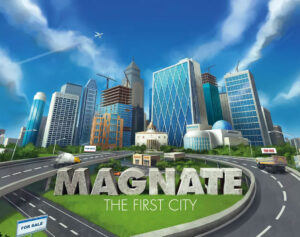 As a socialist and a gamer, any board game that somehow manages to highlight the contradictions of capitalism is going to be appealing to me. And let’s face it, the hobby has only recently moved past the well-trodden terrain of romanticizing—or at the very least presenting without critique or context—the myriad horrors of colonialism and imperialism. So when I first heard about Magnate: The First City, the first game from fledgling designer and publisher James Naylor, I knew it was something I had to play.

Magnate is a 1-5 player economic city building game where players take on the role of money-hungry developers descending upon the unspoiled idyll of Humbleburg after a recent city council vote removed all zoning restrictions. The blood is in the water, and the sharks are hungry! But, folks, this is capitalism, and we know the party can’t go on forever. Eventually, greed begets disaster. That knowing wink and nod are built right into this simple design, with an inevitable game-ending market crash that you as developers are responsible for bringing about. And just like real life, the people who will suffer the consequences are not the developers.

In Magnate, each game round is broken up into 5 phases:

Bidding for turn order is exactly as it sounds. Players bid in $100k increments for the delightful first player marker, an actual toy backhoe. This is followed by phase two, attracting new tenants and collecting rent. There are 4 different types of building units in the game: residential, retails, office, and industrial. Each type of unit can only attract that type of tenant. This is done via a system of rolling dice (more on that later). The dice are utilized in a way that allows players to mitigate the randomness through advertising, a vital tool that makes your units more appealing.

Other elements lend to the desirability of your units when attracting tenants, including their proximity to specific types of other buildings (retail and office units require people to staff them, so they benefit from having more residential units nearby, for example) and their proximity to map features such as parks, airports, and bus terminals. After all units with available room for tenants have had an opportunity to attract them, players collect rent from their tenants.

In the action phase, each player performs one action until all players have done this three times. This is where players purchase new plots of land, build new constructions, or take other actions such as consulting gigs (this is the stock “collect money because you’re broke” action), or purchasing advertising tokens. And most importantly, this is where players can sell their properties once they feel the time is right.

The property market phase is where all that “invisible hand of the market” chicanery happens. Due to the developers’ blatant disregard for the risks they’re taking by rapidly developing this property, various consequences mount. The land value continues to increase, but eventually fewer tenants are available. Suddenly your 80-story office complex doesn’t have a tenant, and it sits empty. All these ill effects are represented in the form of risk cards, which is the mechanic that moves the crash marker closer to the final climax, signaling the end of the game and the point at which the value of all property plummets.

The final phase is simply adding more tenants to the available cache and making more plots of land available for purchase for the next round, but ultimately, the game, at its most basic level, is this: Run the value of land up, build increasingly more profitable units, fill those units with tenants, and sell them before the market tanks.

Before getting into the actual gameplay experience, I want to point out an interesting element in the game box. Naylor thought it necessary to include a large and in-depth tutorial deck that takes you through your entire first game of Magnate. It’s presented as a 5-player game, with any non-human “players” operating more or less as automatons. I chose not to use this teaching method, because the relevant part of the rulebook that teaches you the whole game is only 10-pages long. While I’ve heard the tutorial is quite good and rewarding, and I’m sure it might help non-gamers find their footing, it’s honestly one of the more curious decisions I’ve seen by a designer in a while. This is not Oath, a truly hard-to-grok and complex game with unusual asymmetries and quirks. This is a very straightforward game that falls firmly in the medium weight category. Anyway, all this is to say that I found the tutorial deck totally extraneous, and its existence only served to make the game seem more complex than it actually was.

That said, I have very few other complaints about this game. It’s a wonderful design, has an excellent implementation, has beautiful components, and offers something very few games are able to muster up: actual drama and uncertainty. Aside from the obvious Sword of Damocles that is the impending market crash, two other quandaries hang over the players’ heads, preventing too much repose among one’s laurels. Turn order is bid on each round, and depending on where you land in that order may determine whether you’re even able to rent out your properties at all. Some tenants may be limited, while others may be too difficult to attract. Sometimes going first is everything, to the point where you may be spending the same amount it costs to build a fancy new retail complex simply to bribe city council (this is how I like to think of this phase thematically) to have the first crack at the tenant pool.

The other uncertainty is attracting new tenants. Let’s get one thing out of the way now: this is done via rolling dice. The mere mention of dice is enough to nauseate some gamers, so let me speak to those people right now: Chill out. It’s going to be ok. Seriously though, the game mitigates the dice rolls wonderfully via the use of advertising tokens, which makes you roll an automatic 5. So if you stock up enough you barely need to worry about the fate dashing your best laid plans. So why incorporate chance into the game at all?

Because (and this is stated in the rulebook), attracting tenants is a game of chance. You might get a respectable family into your property and get all the benefits that come with that, but you might only be able to get the college student who is late on their rent and can’t pay much to begin with. Maybe the market was down that week, and the tech startup you were hoping was going to inhabit your new office complex was cash poor, so it went empty for another month. These variable circumstances are expressed by the dreaded die-rolls. Live by market, die by the market.

So, here’s the 20 million dollar question. Does the game succeed in its attempt to highlight the contradictions of capitalism? The answer is yes and no. Naylor’s concept is clearly coming from a perspective informed by the 2008 housing crisis. That crisis showed us a few things. One: the powerful in finance will always find whatever way they can to make money, and even if they did fully understand the consequences of their actions, they wouldn’t care because they remain unaffected and protected. And two: no one who is responsible will ever learn from their mistakes.

So yes, the thesis of the game certainly tows the line of “this is perverse and unethical, you reap what you sow, and eventually, there will be hell to pay.” But when players started the game with 2 million dollars and ended it with 40 million, the question remains “who here is paying that hell?” Who is the loser? Because the millions of people who default on their mortgages, lose their jobs, or get evicted are not represented in this game. This is a game about the villains. And the villains have short memories when they still walk away in the black. But in the end, maybe that’s a feature and not a bug.

On its face, this economic city-building game is a bit like a more complex Monopoly without the randomness and luck. Buy property, build on that property, rent out the property, and ultimately sell it. But things are not as peachy as they seem, as the inevitable market crash is just around the corner (and it’s your fault!). It’s a critique on the worst excesses of property developers, and more broadly, capitalism. Magnate: The First City is wonderfully produced, smartly designed, and thoughtfully conceived, this is an exciting first game from James Naylor, and one of the best games of 2021.