We review Oath, an asymmetrical war game published by Leder Games. In Oath, players are fighting for the succession rights of the world, using a unique variety of mechanics. 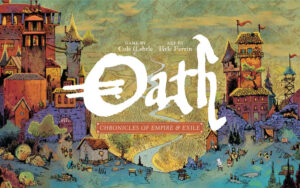 Whether we like it or not, history has categorically been written by the victors. In Oath, the newest release from Leder Games (Root, Vast, and Fort), this fact has never been more apparent. One to six players compete over multiple victory conditions in a quest for command, and then place quill to chronicle to determine the landscape of future plays. Not quite legacy, not quite campaign, Oath is an organic narrative exercise that melds fantasy, politics, and a whole lot of kingmaking.

Does the thought of recovering relics, backstabbing your fellow exiles, and battling for rule over undiscovered terrain sound like it may be right for your group? Then read on, as Oath may be the most engaging board game experience of 2021.

Let’s start with the lay of the land. Oath uses a playmat with three different column locations: the Cradle, the Provinces, and the Hinterland. Each location features unique sites, some faceup and some facedown. These sites present special abilities and the capacity to hold a specific number of denizen cards to enhance the location. Some may even yield a hidden relic card that can be recovered over time. Movement between these sites propels game activity.

The playmat also features favor banks for each of the six factions, each with their own distinctive card set. These cards are available via a World Deck which is seeded with five Visions. The banks start with an equal allocation of favor tokens and become the closed economy to enhance player spending power.

One player takes on the role of Chancellor, while the others are Exiles (in the first game). Exiles may also become Citizens of the Chancellor in future sessions. The Chancellor rules the most sites, holds the Oathkeeper title, oversees an Imperial Reliquary stuffed with relics, and carries the Grand Scepter. Exiles, the upstarts looking to take control of the land, begin with far less power. Every player has a starting pawn and advisor card, warbands, and a certain number of favor and secret resources.

Each turn is comprised of three phases: Wake, Act, Rest. The Wake phase asks you to check for victory conditions or activate certain powers provided by cards or relics. The Rest phase asks you to return favor to faction banks, return used secrets to your inventory (these whispers can stick around), and determine supply for the next round.

In the Act Phase, players take both major and minor actions. The major actions cost one to four supply and are as follows:

Major actions are taken in any order and only limited by available supply. Minor actions require no supply and allow players to play cards, use powers, peek at relics, and pick up or drop off warbands.

The most involved major action is campaign, which sees players actively engaging in combat. The attacker may target any number of sites belonging to the ruler, including any relics or banners they hold. Attackers roll dice equal to the warbands present on their player board, whereas defenders roll a certain number of dice determined by each item’s defense value. The attacker must roll higher than the defender but can sacrifice warbands to increase their value. A winning attack may change rule or see items exchange hands.

And so goes the game of Oath. Players obtain powerful cards to enhance their turns, try to hold fast to an advantage, travel the playmat to campaign for rule or relics, and seek places to leverage secrets or gain favor from factions. Each round is a dynamic field of action as new site and card abilities emerge, and new victory conditions surface. The winner determines the landscape of the next game as the sites they rule will remain and the advisors they utilized will change the layout of the next World Deck.

In our first game, the Oathkeeper title changed hands many times, with the yellow Exile having lost power early by exhausting most of their warbands via campaigning. As such, they accepted the Chancellor’s citizenship offer, effectively becoming a part of the Empire and losing autonomy. This also changed their win condition to the Successor goal of holding the most relics and banners. Which was in reach! Unfortunately, the blue Exile held the Grand Scepter, and in a final turn decided to use its ability to make Yellow an Exile again, thus negating the potential Successor win. But in a turn of fate, Yellow was able to gain a powerful card that made them a Citizen again, thus winning the game and the chance to be the next Chancellor.

Oath is a wild experience in the best of ways and Cole Wehrle has really outdone himself with this design. Coupled with the jaw-dropping artwork from Kyle Ferrin (there are 198 unique denizen cards that feature some of the greatest card art around), the intricate components and stunning playmat make it hard to resist.

The Oath Playbook provides a great overview of what’s in store, and it features an excellent first round walkthrough for a four-player game, which is highly recommended to start. It allows players a semblance of strategy, covers most of the basic functions of the game, and once the first round is complete, the Playbook fills in the remaining details. Oath also comes with a Law of Oath rulebook that goes into depth on every rule in the game.

That said, the walkthrough and rulebook review will only carry your gaming group so far. The ruleset is more complicated than a simple overview can provide, though playing a few times should settle most nuances. Speaking of intricacies, I haven’t covered banners, citizenship, bandits, battle plans, or edifices. All of these are vital and enhance the broad strokes of play but require more rules overhead. Buy-in can be rough for a group not willing to learn together.

Once players start to develop a rhythm, they’ll begin to see how mechanics are utilized to incorporate the theme. Everything feels well integrated and rife with meaning. Adding an advisor to your personal supply increases influence with a specific faction. Revealing a new site adds potential treasures to discover. Searching discard piles allows you to recover Visions discarded by the unworthy. You can negotiate for citizenship to gain artifacts and secrets. Even your supply availability for personal actions is determined by the number of warbands you have in action on the playmat. Obviously, they need to be supplied, too.

As an area control game, Oath sees players traveling a relatively tight board with a main pawn and adding warbands that represent rule. If a player rules a location, which their pawn has traveled away from, they still have access to the site denizen abilities. Great for the player who rules, not so great for everyone else at the table. Who needs to take rule from that player? Who wants exclusive access to those powers? Well, that all depends on the victory conditions.

And there’s always a central victory condition to consider. For example, the initial game introduces the Oathkeeper of Supremacy, or the player who rules the most sites. This can be taken from the Chancellor early on, putting a target on the back of a brave Exile. Rather than go this route, players can instead search for Visions that allow alternate routes to victory. In fact, as the game progresses, finding a Vision that matches current conditions may steal away a win. Players may keep Visions hidden from others during play and quietly work toward them each round.

Most games of Oath eventually shift from exploration into focused attention on a potential winner. The dynamic way that this shifts over time leaves each session a whirlwind of activity, but it also allows for frustration as kingmaking rears its head. Not able to get that Vision card you need? No way to take the Oathkeeper title? Well, now the only viable option at play is to affect the outcome of others. Or, alternatively, the landscape of the next game. If taken as futility, this will frustrate many gamers.

Oath is not a game that will shine in a single session. It requires dedication to seeing how the scene can shift. And this is where the idea of historical impact weighs heavily. The narrative structure is determined by the players, not the other way around. Each game is a living breathing world. Players should want to participate in sculpting that world, regardless of winning or losing. Ultimately, when you sit down to the Oath table you are committing to return and help shape the land for generations to come.

With the right group, Oath is magnificent. It’s dynamic. It’s demanding. It’s frustrating and exciting all within the span of a single turn. It evolves from session to session, where no two plays are alike. And with the right group, Oath has strong staying power. But conversely, this isn’t a game for everyone. The appeal will find many buying in without realizing it isn’t right for them. Though this is a specific game for a specific audience, it cannot be faulted for exuding ambition and looking so tantalizing. The veneer supplied by Ferrin’s gorgeous artwork isn’t a trick, but rather a treat for those willing to settle in. Add in Wehrle’s intricate political design, with quality melding of theme and mechanisms, and it would seem this may be the greatest game that many will never fully explore. For those willing, this is a chronicle that deserves to be written and rewritten, time and time again.

Final Score: 4.5 Stars – A niche exploration of intricate politics and narrative worldbuilding through a historical lens, Oath is one of the most engaging games to emerge in years.

Misses:
• Early rules overhead can be rough
• Not ideal for solo and two players
• Requires a dedicated group to shine