So let’s talk tokens. No, not those shiny metal quarters you used to play ended rounds of Gauntlet in the arcade (mental note: play more Gauntlet). No, I’m taking those little cardboard chits you use to mark things during your game.

Functionally, they work fine. They mark events, status conditions, and other things that a player has to keep track of. The down side of them is that they also can be a mess to keep organized and find, especially in games with many of them.

In this installment of Level Up My Game, we are going to look at a new way to track conditions in your game. That’s right; we are going to save you from the inevitable pile of tokens you need to sort out at the end of the night.

Enter the Mod Cube. Part Token, Part Dice, Part IKEA Storage Solution (ok, I made that last part up), the Mod Cube is fully customizable and lets you keep track of status effects with 1 six-sided cube that can be easily rotated to the token you need.

Now, I know what you are thinking. But can’t I just use the tokens to mark them? Well sure, you can. In fact, it’s a fine approach for a game with 1-2 tokens. But for a game with a bunch of those cardboard chits, Mod Cubes can be awesome.

Recently, I was able to try out some prototypes of the Mod Cube in my latest game of X-Wing Miniatures (and I totally smashed those Imperial Dogs…). In my first game, I just used the tokens. Things were fine for a while, but as I quickly grabbed, placed, and discarded tokens from the table, what began as a bunch of organized piles quickly degenerated into a mass of cardboard. Eventually I was digging for the one I wanted through a pile of tokens, which were also now taking up precious real estate on my tabletop.

So for the second game I busted out the Mod Cube samples I got. This was much better. Instead of having 6 piles of various tokens around the table, each ship basically had one cube that would sit next to it. Cleaner, easy to use, and less mess overall.

As these are fully customizable, I could also see these being really handy for game designers, as you could easily make prototype dice for play testing. Just a thought.

So that being said, who needs a Mod Cube? If the game you have in mind only has 1-2 tokens you’d be fiddling with, than a Mod Cube would probably be overkill. But for some games, they can be a great way to reduce the clutter. 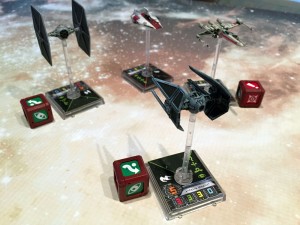 Right now they have Mod Cubes that are compatible with:

And that’s Mod Cubes for you. Are they necessary? Nope. Are they cool and unique? Heck yeah. And that’s what Level Up My Game is all about.

Mod Cubes are currently in funding on Kickstarter. 1 full set of Mod Cubes (with your choice of theme) will cost you about $30, which price breaks as you order more sets. You have until Friday, June 5th to become a backer and these plastic goodies are expected to be in hand by September of 2015.

If you happen across this after their Kickstarter has ended, you can get in touch with the Mod Cube people at www.modcube.com.