We review Iquazú, an area control board game published by HABA Games. Iquazú boasts some excellent production values and has some very accessible game play, which allows you to play with your family and gamers alike. 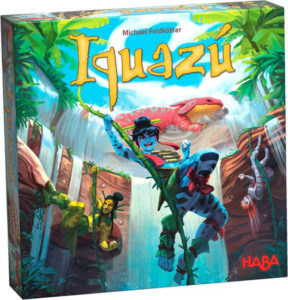 German game publisher HABA Game is mostly known for their bright yellow boxes and exceptional children’s games. From Animal upon Animal to Dragon Tower to Rhino Hero, the BGQ crew is no stranger to playing games with our young ones.

Recently though, the HABA crew has been making games that aren’t just for little ones. Games like Karuba and Adventure Land are family weight games that, while you can still play with your children, have enough meat on them for you to play once you’ve shuttled the younguns off to bed. Today we are going to be looking at Iquazú, a well produced area control game that HABA hopes can straddle the line and be enjoyable for both gamers and your family.

In Iquazú, players take on the role of the native Inox people seeking to hide their precious gemstones from the evil invading Rhujas. The theme and even the artwork clearly draws inspiration from the 2009 blockbuster movie, Avatar. But the theme is mostly pasted on anyway, so let’s get to the game play.

Once the elaborate 3D board is setup, each player is dealt a hand of 4 or more cards. A players turn takes place over 3 phases:

When a column becomes completely filled with water or gem tokens, a scoring round happens.

Next, rows are scored, with the player with the most gems in each row earning a bonus token. These can be exchanged on a players turn for free card draws, extra actions, or end game bonus points.

Finally, the scored column is covered up and the “game window” slides one row to the right. After nine scoring rounds, the game ends with a final scoring. Most points wins.

While Iquazú may look a little intimidating with its sheer amount of components, overall he game is fairly light. If you’ve ever played an area control game before, a lot of concepts will feel right at home. Probably the most difficult thing to explain will be the tie breaker rules for the scoring rounds.

I do have to say that Iquazú is gloriously overproduced, and I say that from someone who LOVES components and beautiful looking games. The waterfall frame hovers above the board and slides previously scored rows out of view. The gems themselves look great on the board and there are even boxes to hold the gems and water drops.

I will say that, while the gem box does look neat, it’s actually more of a pain than useful. It’s really a glorified first player marker and having to dig your gem out of the box when you are ready to place one is more trouble than it should be. I would have preferred just using a first player token and giving everyone their pieces at the start of the game.

For the ruleset, it retains HABAs patented accessible nature, and every player I tested it with had no trouble picking up the game play. This even included non-gamers with little experience playing area control games. So if you are looking for a game to play with the family, Iquazú easily fits the bill.

Despite its light nature, Iquazu actually boasts a decent amount of tactical decisions and strategy. Players will have to balance the long term versus short wins when they decide where to place their gems. The more expensive columns won’t score points until later, but the gems will remain on the board longer to help score the bonus tokens. Plus, they can even set you up for later column scoring rounds where the points are much higher. It’s a great little dynamic in the game that we all enjoyed.

Finally, as with most area control games, Iquazú isn’t great with only two players. The area control is basically a zero sum game. Either you control a row/column or you don’t, with one player being the only one that scores points. Iquazú definitely shines at four players, especially with its very limited down time as turns go by quite rapidly.

Once you’ve played one game, Iquazú is pretty easy to get to the table (game setup aside). The rules are light enough to be played with just about anyone, yet with enough interesting decisions to make to keep even a gamer engaged. However it is still an entry-level area control game, so I’d primarily recommend Iquazú as a family game for older kids. This is doubly true because it doesn’t play great with only two players, so you are definitely going to want 3+ players ready before you bring this one to the table.