Karuba is a tile placement game, where you create a map and move your adventurers to find treasure. A great strategy game for families and gamers of all ages that is easy to learn and play. 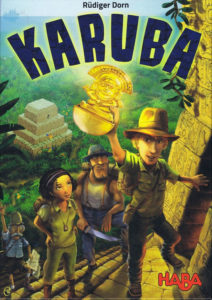 My kids really like HABA games. Most of them are typically geared towards them and they are lighter games that keep their attention. I like HABA games but not as much as my kids. The games can sometimes be “too light” for my taste.

Today we look at Karuba from HABA. This game has gained some critical attention from an adult audience this year and was nominated for Spiel des Jahres. This is a tile placement game where you create a map and move your adventurers to find treasure. Is Karuba another light kid’s game from HABA, or can it keep adults interested to be a good family game? Read on!

Karuba is a tile placement game for 2-4 players and plays in about 40 minutes. It plays best with 3-4 players.

Your expedition team has arrived on the island of Karuba. They are on the hunt for hidden treasures. You must lay tiles to create the smartest and shortest path to 4 different colored temples. But this is a race against other the players, the first to navigate the jungle paths and make it to the temple gets the most valuable treasure. The game ends when the first player secures all 4 temple treasures or when players run out of tiles. The player with the most victory points in treasure wins.

Karuba comes with many different components, all of which are of great quality. The most noteworthy component is the island map. This is essentially your game board and it’s a grid where your tiles will be placed. The jungle map has latitude and longitude degrees on each side, which is a nice adult touch to the game. HABA could have gone light and just put basic numbers, but instead they use double and triple digits and add degrees to mirror an actual map. This was definitely a nice thematic touch.

At the heart of the game are the jungle tiles, a key component to the game. These are a nice, thick, card stock and should hold up well to replays. The art is detailed and easy to see which direction the path goes, as well as the jungle tile number which is vital to identify and then place. I also like the fact that the backs are color coded so if these get mixed up between players they can be easy separated.

The only component that I thought was underwhelming was the temple treasure. You have actual small plastic pieces to mirror crystal and gold you can find along the trails, but the temple treasure is card board. Now, each treasure is color coded and a unique treasure itself, but I would like something better than a thick card stock for the high VP of the game.

Once players have all their pieces, players then cooperatively decide where on the island map to place their adventurers and temples. Note: Each player will be placing on their own island map. There are two things to note with placement. First, Adventurers can only be placed on the beach border and temples on the jungle border of the map. Second every player places the same color adventurer and temple in the same exact location on their maps. So the initial placement needs to be identical for every player.

Lay a tile on the map: Tiles can only be placed in free spaces and do not have to be placed next to another tile. However the tile must be placed so the number is always in the upper left corner. Players can create a path with a dead-end if they don’t want to connect two paths. Finally, when a tile shows a crystal or gold nugget – players take the corresponding piece and place it appropriately.

Discard the tile and move an adventurer: A player can move 1 adventurer as many steps as the number of paths indicated on the tile, i.e. 2 paths = 2 steps. Adventurers can only step forward to a new path and only along path spaces. Only 1 adventurer can occupy a tile. If a player doesn’t want to move the full value, step points can be forfeited.

Tiles are placed or discarded until either a player has all 4 of their adventures reach a temple or when all 36 tiles are played. Each player then counts up their temple treasure points (5-2 points), gold nuggets (2 points) and crystals (1 point). The player with the most treasure VPs wins.

I loved this game right out of the gates. I was initially worried that Karuba was another kid’s game that was light on game play and heavy on the theme, but I was so wrong. There are many positives with this game.

First of all, Karuba is thinky and has a higher level of strategy than most family games I’ve played. Each player has access to the same jungle tile, but what they do with it is what makes the game interesting. There are many options to think through and multiple VP options that players can collect. It’s important to note that even though the strategy level exists, this is an easy game to teach and learn for gamers of all ages.

The second is that Karuba has a good theme but it’s not pasted like some kid/family games. Those can hit you over the head throughout the game play, making most adults suffer through the obnoxious game characters or over top images. Karuba’s theme is straight forward and complements the game play. You lead an expedition looking for the most treasure. Check. You have an island map and tiles to place to make a path. Check. You have meeple temples to reach with your meeple adventurers. Check and done. It’s subtle like most games geared for adults.

The third is that player interaction is low, but other player watching is high. You need to, no MUST, keep an eye on the other players. Most family games have you typically running around the board, chasing the leader. In Karuba, you need to keep track of the leader (VP wise) and that could change each turn. There were more than a few games where my family and gaming group had someone reach their 4th temple, only to realize after that another player still had more VPs. So, the leader in Karuba might not be obvious if you’re not keeping an eye on them. It’s really to keep track to make sure if you’re ahead or behind the current leader.

I honestly don’t have too much negative to say about Karuba. The only thing that could be viewed as a negative is the set-up time. The game averages about 40 minutes per play, but actual game play is about 25-30 minutes. The set-up for non-expedition leader players is about 7-8 minutes to get your jungle tiles in numbered order. Now, you don’t have to do that but it makes the actual game move faster if you do. Again, not a big negative but it can be for young players who tend to get restless.

HABA has been doing a great job of designing games that appeal to kids, yet can still be enjoyed by the whole family. Karuba fits the bill on both fronts. It’s a great family game with strategic decisions, rules that are easy to learn, minimal downtime, and doesn’t have a pasted on theme that drives adults crazy.

Karuba is easy enough to play for families of most ages, yet there should also still be enough depth here for any gamer to enjoy. The longer set-up time and low player interaction could be viewed negatively, but there’s very little to complain about with Karuba. I understand why this was a Spiel des Jahres nominees. This one will be my collection for a long while.

If you are interested in getting a copy of Karuba, you can pick it up for about $35 from HABA USA.

Final Score: 4.5 Stars – A well-built tile placement game for families and gamers of all ages. A must have for any gamer or family who likes some level of strategy in their games.