Board Game Review By: :
Tony Mastrangeli

We review Dragon Tower, a combination memory and dexterity game from HABA USA. In Dragon Tower, players are trying to build a scaffolding along side a tower in the hopes of rescuing a trapped princess. 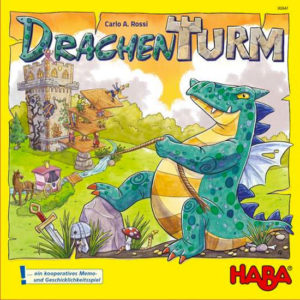 A prince (or knight) recusing a princess from a dragon is about as classic as a fairy tale gets. Yet as ubiquitous as these stories are, there really aren’t too many board games on this topic. Well the King (Queen?) of family games, HABA Games, has sought to remedy that with their newest family game Dragon Tower.

Dragon Tower is a memory and dexterity game for 2-4 players that takes about 15 minutes to play. Dragon Tower plays well at any player count.

In Dragon Tower, players must work together to rescue the princess from her prison tower. The game is actually played in two parts, with the first part having players build up a scaffolding alongside the tower. Once that is built, they must then quickly, and carefully, retrieve the princess before the dragon destroys all their hard work. If they can get the princess back to her carriage before the tower collapses, they’ll enjoy a shared victory.

In the rather large-sized box of Dragon Tower, the main attraction is probably the 3D tower. This is assembled in stages (most likely with a parents help) and towers above your table (see what I did there?). Also included are a number of cardboard peasants and platforms which are used to allow the knights to access the tower.

Each player also gets a cardboard stick to use during the dexterity portion of the game. I did find it odd that one stick has the prince, and the other three are knights. As none of our little testers were excited about not being the prince, I wish HABA would have made up 3 other roles, even if they are only different in art/theme.

The other exciting component has to be the dragon himself. He is attached to a large rock via a string. The string can be pulled out, and sliding his wing up will start the retrieval mechanism where the dragon will slowly pull the rock towards him (more on this in a minute).

Overall, the components in Dragon Tower have HABAs usual quality. I do have concerns about the mechanical dragon breaking due to overzealous kids, but HABA also knows their target audience and has an extremely friendly replacement policy on components.

Playing Dragon Tower is fairly easy. Once the game is set up (the tower does take a bit), the dragon rock is placed next to the tower, with the first platform resting on the rock and the tower’s edge.

Starting with the first player, each player takes a turn drawing a tile from the grid of tokens. One of three results are possible:

Players continue taking turns, hunting for the right color peasants, while trying to avoid the dragon tiles. Once they’ve successfully built all 4 levels of the tower, they are ready to try to rescue the princess.

The princess is a pawn in the top room of the tower. Once they are ready, the dragon is activated and he will slowly retract the string tied to the rock. The players must work together to move the princess pawn out the door of her cell, around the tower, down the scaffolding, to her waiting carriage using the included pushing sticks.

While they are attempting that, the dragon is slowly pulling on the rock. Should he pull it far enough, the scaffolding will collapse, causing the players to fail in their rescue attempt.

OK, I’ll admit it. I didn’t have much in the way of exceptions for Dragon Tower. I liked the theme, and it did include a dexterity aspect (which I always love), but it also didn’t seem like much of a game was here.

But hey, I’m a big enough person to admit when I’m wrong. Dragon Tower definitely has something going for it and I can pinpoint the moment when I realized that. In our first game, I was playing with two younger kids (ages 6 and 8). They seemed to be having fun with the matching portion at the start, but it wasn’t until the dexterity phase when they really got excited.

However it was after we finished the game when I could tell that HABA was on to something. We started the timer, moved the princess, and got her to her carriage just before the tower fell (like seconds). The kids screamed with excitement and ran into the other room to tell their mom about their accomplishment. Once they returned, they immediately wanted to play it again. It was then that I realized my initial assumptions were clearly off base.

The dragon timer aspect of the game was a really great design decision. It adds an amount of tension that really can’t be replicated with a sand timer or phone app. You are trying to get that princess out, all while keeping an eye on the slowly moving rock. Players will be yelling and screaming as they try to work quickly and cooperatively. It’s exciting, tense and quite frantic.

I will say that the memory portion of the game in the first half is just OK. There is some excitement when a correct match is found, but the dragon tiles also seem to come up fairly often. In fact, unless you are super lucky, chances are the dragon is going to be in either the last space or second to last by the end. And that’s important because the farther the dragon moves back from the tower, the less slack will be in his rope. But, thankfully, our little testers even had fun when they lost. The clatter the tower makes when it collapses is oh so satisfying. Even when we won, we still watched the tower fall.

Some HABA games manage to straddle the line of family and gamer games. Titles such as Adventure Land, Karuba, and Rhino Hero can all be enjoyed with only adults. Yet Dragon Tower falls into the other category. While I did enjoy it, I don’t see myself pulling this title out with my gaming group. This is a game to be enjoyed with your kids, and that’s OK. I still found the game to be enjoyable, even after a few plays in a row.

As long as HABA keeps coming up with innovative board game concepts, I’ll keep buying them. While the idea of matching up a memory game with a dexterity probably isn’t brand new, the excitement that comes from playing Dragon Tower cannot be denied. In our first session, we played 4 games in a row and only had to stop because of how late it was getting.

While this most likely isn’t a game you will play without young kids, for parents looking for something fresh and new to play with their young ones, I think Dragon Tower makes a great choice. It’s fun, especially the second half of the game, and watching that tower fall is quite entertaining.

If you’d like to get a copy of Dragon Tower, you can pick it up for about $50.

Final Score: 4 Stars – A great mashup between a dexterity game and a memory game that’s a blast to play with your young ones.

Misses:
• Setup will require an adult
• Not a game you’ll play without your kids