Animal Upon Animal is a kid's dexterity game that includes elements of a stacking game that also tests a player’s placement skills. You will roll a die and place or stack your animals and the first player with no more animals wins. 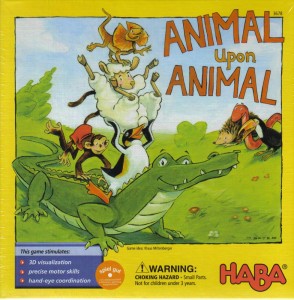 While at Gen Con 2014, I got the dreaded call and question from my wife. She asked, “OK, what games did you find for the kids?” I have two little ones at home who I cannot generally find kid appropriate games for. Sure, in the past I’ve found some games that I’ve convinced them to play but I lose more than I win with that battle. After discussing my wife’s question with anyone who would listen, I was directed by a mutual friend to a small booth by the game company HABA. I was surprised to find kids laughing while demoing games and that every game on display was kid friendly (that also have educational undertones as well). I bought two games and those have since stayed on the family and kid’s game rotation.

That brings us to another HABA game that my kids have helped review for today: Animal Upon Animal. This is an animal stacking game that also tests a player’s placement skills. Will this game stand up to my two picky youngsters and find a slot in their game rotation? Let’s find out!

Animal Upon Animal is a stacking game for 2-4 players that plays in about fifteen minutes. In my experience, the game plays well with 3-4 player counts.

You need to think reverse Jenga for kids. Each player is given 7 different animal tokens and they roll a die and either stack or pass an animal to another player. As players stack, a pyramid-like shape will be formed. The goal of Animal Upon Animal is for players to lose all of their animals and the first player who does is the winner.

As I mentioned before I’m already familiar with HABA games and they typically have excellent components. Animal Upon Animal is no different. All the animal tokens are all of a unique shape and color, wooden, and have kid appropriate details to each animal. These kid pleasing details are etched into the animal, which helps little fingers grip and each animal comes with a smile. These pieces are durable and should stand-up to stacking crashes and more importantly to kids.

The 6-sided die that comes with game is also worth mentioning. It’s large enough for little hands, wooden, and also a unique color. It like the animal token can stand-up to use and abuse.

The other component worth mentioning is the rule book which comes in 5 different languages (just in case you want to practice your linguistic skills). Like other HABA rule books, the design uses straight-forward language, just the right amount of diagrams, and most importantly is easy to digest and learn which makes teaching even easier.

The only issue that my kids had with the components is that the animal tokens only have detail on one side. This might not seem like a big deal to you or me, but when an animal is stacked and one of my kids can’t see that smile, it was typically whine inducing the first few times we played. This occasionally stopped play and even got someone sent to their room. I think if the animals had two-sided details then no issues (or timeouts).

Game play in Animal Upon Animal is very straight forward. At the start of the game, the one crocodile token is placed in the center of the table. Each player then is given 7 different animal tokens: a sheep, penguin, monkey, snake, tucan, collar lizard, and hedgehog. A cool detail to note is that now my kids know what a collar lizard and hedgehog is and looks like. Each turn players will roll the die once and then place or pass their animal tokens on the starting base crocodile.

The 6-sided die has the following symbols and numbers that each player has to follow on their turn.

1: on two sides of the die there’s a 1 and players can choose one of their animals to stack on the crocodile.

2: on one side of the die there’s a 2 and so players can choose TWO of their animals to stack on the crocodile.

Question mark: this symbol means other players choose which animal the current player must stack on the crocodile.

Hand: this symbol means players chooses one of their animals and they pass it to another player for them to stack on the crocodile.

Crocodile: this symbol means players chooses one of their animals and they place it in front or behind the crocodile instead of stacking on it.

If at any point during the game the stack of animals collapses you need to note the following rules:

The game ends as soon as a player has no animals left.

Animal Upon Animal is a game with easy to learn rules and quick game play. These are things that you’d expect from a dexterity game. My family and kids love dexterity games. They love being able to control their turns and even though Animal Upon Animal uses a die that adds a randomization element, the outcome is controlled by the player’s actions. What might surprise you is that it’s not just a dexterity stacking game but also a strategic placement game as well. The strategic element becomes apparent as you try to place your animals in an ideal location as not to collapse the stack while simultaneously attempting to deny your opponent the same. This strategy got a bit darker in our plays as my kids purposely placed animals as to make the next player collapse the stack and most of this was directed at me (I taught them well).

I have to admit that many kid games nowadays are dripping with educational overtones so much that you are not having fun but being forced to learn. Animal Upon Animal does the opposite. This game is fun and, unbeknownst to my children, they’re learning as they play. When my son first played Animal Upon Animal he slammed the pieces onto the stack and scattered animals everywhere. You would have thought the game was called Animals Attack Animals. By the third play he finally understood the finesse needed (mainly because he was not winning) and you’d thought he was handling Faberge eggs. Self-discovery for kids is one of the best ways for them to learn and like most HABA games Animal Upon Animals continues that trend.

The one game mechanic that needs attention is the collapse rules that keeps the game competitive. These rules only allow a player to select one to two animals based on the number that fall (one animal if one falls or two if two or more fall). If you collapse the whole stack you’re still in the game. I think this was an ideal rule mechanic for Animal Upon Animal because otherwise one collapse would knock a player out of the game and that makes the game less competitive and less fun for all players. One or two favorable rolls and a player can basically back in the game.

One thing that I would like to note is that the play is really for 3-4 players. I tried 2-player game with one of my kids, and then with both kids as I watched, and it’s not a lot of fun. The 2-player game is over too fast and it’s not very challenging. We did start to use the variation rules which ask you to use all remaining animals (so you then have 14 each instead of 7) but even the 2-player version with these rules is still not much fun. It’s more challenging, but it’s just a race until one player causes a collapse.  The collapse rules in the 2-player game still makes Animal Upon Animal competitive but one (or more) collapse most likely does take one of the player out the game with this player count.

The variation rule of using more animal adds a lot more fun to a 3-player game. We have a house rule which my kids think is a blast because we actually do an animal draft with a 3-player game and we always use this rule with this player count. The kids can select their animal and so each player has 2 duplicate animals and one goes back into the box. The other variation rules were interesting but we did not use them.

I honestly I have more praise than issues with Animal Upon Animal. This is a fun dexterity game for kids of all ages. In addition, the rules are easy to learn and easy to teach. For example, my 5 and 8-year old taught their grandparents to play under 5 minutes and were able to answer their questions throughout as they played. If you do have questions the rules are three pages that you can easily reference and find an answer quickly.

While I don’t think Animal Upon Animal is a great 2-player game, I do think it’s a great game that excels at kids having fun while they learn. Games should be an escape and kids are pressed to learn for most of their day. Animal Upon Animal gives the kids a fun distraction that will test their motor skills and help improve them as they play. Plus, kids will also be learning strategy and placement as they play as well. All of these educational elements will be undertones and unbeknownst to the players they are learning as they play.

The last thing to highlight is that Animal Upon Animal components are awesome and the very definition of kid friendly (did you see the smiles on the animals). My kids love them and even after we’re done playing they want to continue to play and stack them. My 5-year old son loves the penguins so much that I found he had removed all four and was playing with them along with his other toys. Do you want to guess when we draft additional animals what he picks? Yep, you’d be correct.

Final Score: 4.0 Stars – A fun dexterity game that will help all players of all ages learn or sharpen their stacking and placement skills. 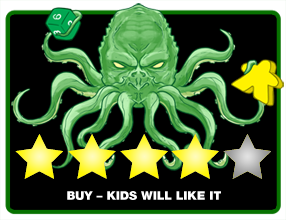 Hits:
• Components are kid appropriate & friendly
• Collapse rules keep players in the game
• Kids play and learn without knowing it

Misses:
• Animals only have detail on one side
• Game is not a fun 2 –player game