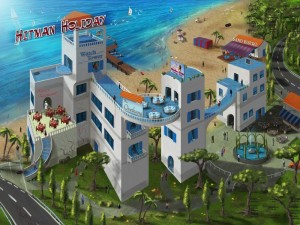 I imagine the job of an assassin is just like any other high stress job. They have to deal with deadlines, corporate downsizing, and the whole having to covertly murder someone. I’m sure when they are not on the job they are looking for a place just to relax and get away from it all.

In the game we are previewing today, assassins have taken their work with them on vacation. In Hitman Holiday, players will take on the role of assassins in a beach resort with other members of the same profession. The goal is simple, kill your target, and don’t get killed by the assassin looking to kill you. Let’s get into the preview to talk more about the game and see if you want to support it on Kickstarter.

This is the time of year you dread because it’s time to take a vacation. Unfortunately, this is one paid for by the assassin’s guild, meaning that this vacation will determine if you say in the assassin’s guild or in the world at all. Players take the role of a professional hitman and are given the name of one of the other assassins staying at the resort. It is your job to move around the resort searching for covert places to kill your mark and fulfilling your basic needs of food, sleep, and restroom breaks. The issue is you have no idea who is assigned to kill you and you will need to watch your back constantly. Players will earn points for how effectively they kill their targets and lose them if they get killed. The player with the most points after two contract rounds win the game.

The primary game mode supports ten players but requires at least five people to play. I will be going through how to play the normal game mode here today. For the full rules with variants on how to play with less than five people please go to this link.

The main board is littered with circular spaces for players to move around the resort. These spaces will denote different types of locations by the colored circle around it. Some will show direct and ranged kill locations that players will be able to take out their target directly, while others have too many witnesses present and players can’t be killed there. Also, there will be locations to take care of those pesky basic needs.

Each player will start with their assassin figure, a player board and a set of tokens. Two decks will be made representing every hitman in the game. These are the two Target decks that players will draw from to determine who they are contracted to kill in the current contract period. Miniatures will be placed in their designated locations and players will also place tokens on all the Cache spots on board as well as drawing three Hidden Action cards. These Cache tokens can be retrieved during the game and allow the player to draw extra Hidden Action cards hoping to get that one item they need. Once players have drawn their target the game play can begin.

Players will have up to 4 Action Points to use on their turn. These can be spent moving around the board, activating kill zone locations, place Hidden Action cards, and observe or disable hidden items placed on the board by other players. Each hitman has its own special power that players can choose to use on their turn. The Hidden Action cards give players the ability to place security cameras in areas around the board protecting them from getting killed in that location. These cards also give you the garrote and knife cards to kill your target covertly.

After each player has completed their actions, they increase the three need dials up by one. If it has reached the maximum, then the player loses one heath and one point. If a hitman runs out of health, then they die. Death isn’t permanent and players will return from their starting point at the start of the next turn. During each contract phase there will be eight turns for the players. After each player has had two turns, players will place one of their tokens on the bulletin board. These tokens will be placed next to the characteristics of their target. Giving people the chance to guess who is attempting to kill them.

Players can earn points during the game by killing their target, catching another hitman attempting a kill, or calling out who is their contract killer. Players can lose points by letting their needs get to high, reporting the wrong killer to authorities, or caught for a killing attempt. Players will draw a new target after each player has had eight turns. After that round is over players will total up their points and see who wins. A player can end the game earlier if they have accumulated five points.

What first drew me to this game was the prospect of pitting assassin vs. assassin. It was a concept that I hadn’t experienced and thought the vacation theme would be interesting. The use of the resort hotel breathes life into the game by allowing for some creative ways to kill your target. If it was just shooting or stabbing it would get quite stale, however, having the opportunity to cut the elevator cables or run someone over with a jet ski brings variety to what you can do.

They way that killing is handled in the game is quite a divergence from the way I would think combat would occur. It does away with rolling dice and superior upgraded equipment for specific locations around the board where you can use your assassin skills. This creates a game that is much more about your tactics then the size of your gun. The game does allow some variability in the Hidden Action cards. Not only do they give you the chance of finding a knife or garrote to use outside of these designated zones, but also cameras and bombs to protect yourself. The deck is full of useful items to help you and hurt other players. It all blends nicely together to make this part of the game work quite well. I also like how you only have one target in each of the contract rounds. Having just one target gives the game focus. The game would have been a chaotic mess had it been a free for all for who you could assassinate.

Having a clear target is great, but I was constantly feeling fear knowing that someone out there was looking to take my hitman out. I have enough things to worry about trying to kill my own target than trying to avoid getting killed myself. Every time you move around the board or through another player’s space, you hope that doesn’t end in your demise. Having this aspect could mean that people sit in a location but that isn’t the case due to a few motivating factors. The value of the action cards makes people want to move around the board to claim a few extra cards. I did think the whole “needs aspect” of the game didn’t serve much purpose until I played the game. These force your hitman out of hiding to make sure you don’t lose precious points. The locations of places to help reset these dials are spread out forcing you to move around the board more than you would like. Also, because each contract has a limited shelf life, it forces you to go after your target.

One aspect of the game I didn’t fully understand until I started playing the game was the level of deduction that the game would introduce. It takes some time and sleuthing to figure out who is trying to kill you and it’s important to keep your target secret. I enjoyed moving around the board following someone that wasn’t my target hoping they would make the mistake of accusing me. This only works for a short while because the game forces each player put down a clue about their target every two turns. This forces you to move quickly on your target before they can alert you to the authorities. It adds another layer to the game to have this deduction and bluffing element.

This game supports a large group quite well. It supports up to ten players, which I admit gets a little congested around the table and on the board, however, it doesn’t distract from the game play.

Hitman Holiday manages to blend a tactical movement and bluffing mechanics into a fun fast paced game. Each game feels unique because the different assassin powers and starting locations mean you have adjust your strategy each time you play. Hitman Holiday could easily be a chaotic mess, but the addition of the assigned target makes the game much more focused. The game scales well as you increase the player count and doesn’t increase the time played significantly. Hitman Holiday would be a good fit with a larger game group looking to play with 5-8 players. If assassinating your friends in board game sound like fun to you, consider giving Hitman Holiday your support.

If you’d like to become a backer, pledges start at $54 US for the full game and all stretch goals. Hitman Holiday is scheduled to be in backers hands in November of 2015 and you have until Thursday, March 12th to become a backer. So head over today and check it out.