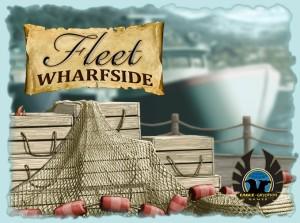 I own Fleet and have enjoyed my plays of it as I took on the role of a Fleet Captain managing my boats, licenses and hunting down those elusive fish. Fleet maintains a solid foothold in my game collection. Designers Ben Pinchback and Matt Riddle, along with Eagle-Gryphon Games are bringing us back to the world of Fleet with a new game called Fleet Wharfside. Fleet Wharfside uses a simple and quick, yet engaging card-play to challenge each player (Captain) to acquire and fulfill the most profitable contracts.

Fleet Wharfside is currently on Kickstarter through August 4th and is a game for 2-4 players that takes 20-30 minutes to play.

Fleet Wharfside invites players to compete with each other to obtain goods at the Wharfs to purchase the most valuable contracts and buildings in order to gain end-game scoring victory points. This is all done through astute hand and tableau management.

Each player turn, starting with the first player and continuing clockwise, consists of using the wharf or using the market.

Or “Using the Market”:

The turns continue until a certain number (based on player count) of buildings and completed contracts have been attained by a player. Play continues until each player has had an equal number of turns.

I figured the best litmus test for Fleet Wharfside would be to teach it to and then play it with my wife and daughter. They have never failed me letting me know right away with their facial expressions if a card game is delivering what it claims to be: fun, quick-playing, engaging, and lightly brain-teasing. Fleet Wharfside did not disappoint either of them.

It took about 5 minutes to explain the objective of the game and describe what a player could do during their turn. Starting a game quickly is always a plus since this gaming group mostly has a short attention span. We enjoyed the streamlined actions that can be employed during one’s turn. The brain-teasing comes from how a player plans out what goods and contracts to obtain, how to optimize the use of those goods and contracts, and completing the contracts in a timely manner.

Especially interesting was determining what goods to obtain from which wharf. Several times at the table I heard, “When is that blankety-blank good going to come out? I need it now!” The mechanism that defines the “value” pecking-order for each good as compared to other goods allows the players to decide if they want to pay more now to be able to use goods in exchange for others rather than waiting for the “right” goods to become available on a later turn. Adding this risk-reward decision into this game not only makes thematic sense, but is highly gratifying when it pays off.

The market mechanism that regulates the purchasing cost of buildings and contracts kept us on our toes just enough to entice us to jump at the opportunities and take advantage of “reasonable” purchase prices when they revealed themselves. Kudos to the designers for crafting mechanics that seamlessly integrate into the flow of the game. I liked that players can discern the purchase cost of the available contracts and buildings without any strain.

As an experienced gamer, I can envision that both the wharf goods selection and the market purchase regulation mechanisms offer enough meaty gameplay primed for deeper exploration from game to game. From the reaction during gameplay by my wife and daughter, who are light gamers, I can see the appeal of Fleet Wharfside for family play. This game has the potential to become a staple when deciding on a card game to play.

The only minor qualm that I have with Fleet Wharfside is that I wish the captain cards had offered additional unique abilities to make them feel more like I am really playing a unique captain throughout the game. The one ability that they have is providing an additional end-game scoring bonus for matching the captain’s specific goods icon with ones on completed contracts. It provides an in-game objective to shoot for which is good, but it doesn’t make me feel like I am at all playing as a unique captain. I also think the buildings should provide some unique ongoing ability when purchased. They provide end-game VPs which are valuable, but that is all. Maybe asking for extra stuff in the game may throw off gameplay balance or adversely add to its complexity. I cannot say for sure.

Can a game with a commercial fishing theme be fun and engaging? Fleet Wharfside, like its predecessor Fleet, effectively showcases its theme and simultaneously offers a fulfilling and fun experience for both light and experienced gamers.

If you’d like to become a backer, pledges start at $11 for the full game and stretch goals. Fleet Wharfside is scheduled to be in backers hands in November of 2015 and you have until Tuesday, August 4th to become a backer. Head over today and check it out.