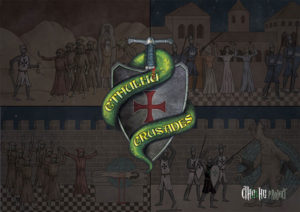 While there are about a million games right now with a Lovecraftian theme, I can’t think of very many that are also set during the time period of the Crusades. I would think that this time period would be ripe for some Lovecraftian fun.

Well a new card game called Cthulhu Crusades seeks to change that fact. Now in funding on Kickstarter, Cthulhu Crusades will see players trying to attack their opponent’s castle, and at the same time, do everything they can to keep their one fortress safe. So let’s dive in and see if this is a game you’d like to back on Kickstarter.

In Cthulhu Crusades, each player is trying to defend their Necronomicon from being stolen. Players start with a castle and three walls to protect it. During the game, players will be drawing cards and taking actions to try and bring down their opponent’s castle walls. Soldiers, Archers, Siege Weapons and because this is a Cthulhu game, even monsters will be a force on the battlefield. Be the first to destroy your opponent’s castle, and you win.

Game play in Cthulhu Crusades is fairly easy to pick up. As a side note, our prototype only came with components for 2 players; however the publisher has informed us that the final game should be 2-4 players.

To setup, each player takes their castle card, and places it behind their three wall cards. Each wall card starts with 2 health, while a player’s castle has 3. Players then each draw 5 cards from the shared deck and they are ready to begin.

On a player’s turn they draw one card from the shared village deck and then they must play one card as an action.

There are a few types of cards in Cthulhu Crusades:

There are a few more special cards, such as night attack, idol or thief. But those are rare to find in the deck.

To attack your opponent, you choose a wall section (or castle if all three walls have been destroyed) and play enough attack cards to beat the walls toughness (starts at 2, but it may be higher if the defender has played archers to the wall). If you played enough cards, and the defender doesn’t have a Cthulhu Card as a response, the wall section is destroyed. The attacker may then draw a bonus Village card.

Once a player has taken their action, the next player goes. Turns will alternate back and forth until one player’s castle has been destroyed.

Cthulhu Crusades is an interesting game. It’s very easy to learn, yet players will still need to make some tough decisions on their turn. With only one action per turn, there will almost always be times when you have more things you want to do than actions.

My favorite aspect of the game has to be the different ways a player can use the cards. I liked how soldiers and archers can be used on offense or defense. However to use them as a defender, you need to plan that in advance (since they can’t be used as a reaction). When you add a soldier or archer to a wall, it can help delay your opponent from successfully attack. However it comes at the cost of offense.

I also liked how coins were almost the wild card of the game. They can be used by themselves to draw cards from the village deck, or you can combine them with other cards if you are short on the ones you need. I found that’s the easiest way to get siege weapons, 1-2 builder cards with the rest of the payment in coins. Coins are also good to use if you don’t have anything better to do on your turn. Play one and get 2 new cards.

Unfortunately, with all this card drawing, the game can start to feel a bit random at times. More than once I’ve really wanted to draw a certain card, and it just didn’t pop up. I’m not sure if they will be addressing this, as they game was still in development at the time of this writing. But Cthulhu cards are one of the only reactionary cards in the game, so it can get a bit frustrating to never draw a cultist card. Many times in the game you are going to be at the mercy of the draw deck.

Other than the inherent randomness, we didn’t encounter too many other issues with Cthulhu Crusades. I liked how quickly turns played and that downtime was minimal. I’m curious how the game plays with more players, and if there will be anything to mitigate players from ganging up on one player.

Finally, while we don’t usually comment one artwork or components for prototypes, I do want to say that I really enjoyed the artwork in Cthulhu Crusades. The back of the cards have a stained glass look that fits the theme of the game perfect. And the fronts of the cards are drawn in a style that feel like I’m reading an old manuscript. Overall, I found the artwork to be spot on and highly thematic.

Cthulhu Crusades ended up being a quick playing battle game that worked well with two players. While the game can be a bit random, we did enjoy the different ways that cards can be used, and I hope they expand on that as the game’s development progresses.

If you’d like to become a backer, pledges start at €19 for the full game with other pledge options available. Cthulhu Crusades is scheduled to deliver in June 2017, so head over today and check it out.