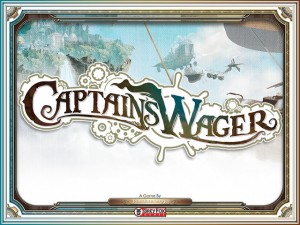 I like the idea of pirate themes in board games because, being the law-abiding citizen that I am (I can’t even pick the evil choice when playing games like Star Wars – The Old Republic…), it allows me to plunder and loot other players guilt-free. I also like gambling in board games because… well, let’s just say I am much better at losing money than winning it. Today we are going to look at Captain’s Wager, which combines both of these into one game.

Captain’s Wager is a gambling/bluffing card game for 2 – 5 players that lasts about 30 minutes.

Pirate captains begin each game with a set of Treasure cards that represent their personal supply of gold. These cards are used for the ante at the start of each Encounter, as well as for betting during each Encounter. Each turn in Captain’s Wager consists of one Adventure, made up of three Encounters. Players deploy their crew (Crew cards with a value between 1 and 20) in an attempt to win the majority of the three Encounters that make up each round of the game. Any Treasure cards won during an Adventure are moved to the Claimed Treasure stack. The game ends when one captain’s Treasure deck is depleted. The player with the most gold at the end of the game wins.

At the start of each Adventure, three Encounter cards are placed on the table (Note: An Encounter is just a game term – there are not different types of Encounters, like lowest player wins, or highest even number wins. They simply indicate if it is the 1st, 2nd, or 3rd Encounter of the round). Each player draws four Crew cards from the Crew deck and also antes one of their Treasure cards face down into the pool. Starting with the starting captain (determined randomly at the start of the game, or the winner of the previous Encounter during the game), the player must decide to:

Bet – place the top card of his Treasure stack face down in the pool and play one of his four Crew cards face up and resolve its effect
Borrow – take a -2 IOU token instead of betting a Treasure card and play a Crew card face up and resolve its effect
Steal (Fold) – collect two or three gold (depending on the number of players and if anyone has stolen previously in that Encounter) and an Item (Items are face up Treasure cards that move to the dealer’s hand, are no longer worth money, but can be used as special powers depending on card text). Upon folding, a player can no longer participate in that Adventure, including collecting Treasure from the pool from winning previous Encounters during that Adventure.

Once all players have either bet, borrowed, or stolen, players that have bet or borrowed have one last chance to play Item cards with end of Encounter powers that can impact crew values positively or negatively, then the crew values are compared and the highest valued crew claims the Encounter card. Treasure cards are not distributed and remain in the pool. This process is repeated until either all but one player has stolen or all three Encounter cards are claimed. Treasures are then distributed as follows:

Finally, any player who wins Treasure cards can look at all of them and choose to take one into his hand as an Item card. The remaining cards are placed face up and are worth as much gold as printed on the card, but they cannot be used for Items at that point.

Finally, the gambling in this game is simplified. One Crew card (or two if a certain Crew card is used) determines the winner. There are no straights, flushes, full houses, etc. Also, you cannot bet again after you have bet that Encounter. You only Bet, Borrow, or Steal. That being said, determining who won can be tense based on which Item cards might be played at the end of the Encounter.

It is a difficult balancing act to maintain between showing how strong your hand is versus playing weaker so your opponents will not fold, increasing the number of Treasure cards that will be in the pool at the end of the Adventure.

Another difficult decision is converting a Claimed Treasure card into an Item. As an Item, it gives you a power, but is now worth nothing at the end of the game (Note: the exception is an Item card that is worth something in your hand, as explained in its game text). I found this to be another interesting decision that has to be made during the game.

Finally, knowing when to Steal (flee) is an important skill in the game. Not only does it give you gold and an Item, it prevents you from having to ante or Bet/Borrow to remain in an Adventure that you do not think you will win. Also, because the game ends when one captain does not have any cards remaining in his Treasure stack, it will delay you ending the game. Every card remaining in your Treasure stack (assuming you did not end the game) is worth one gold.

Captain’s Wager is a fun gambling/betting game and I believe that the game really needs four to five players to truly appreciate the nuances of the game. More crew members are used, the decisions are more difficult due to more players, winning Encounters is more difficult, as is winning two of the three Encounters to win all of the Treasure cards in the pool. I also look forward to the impact the stretch goal crew members could have on the game, as well as the expansion.

Finally, although I have not yet mentioned it, the card art is absolutely GORGEOUS!

Captain’s Wager is already funded on Kickstarter and is currently attaining new stretch goals. You can back the project for $18 USD, or for $28 USD, you can back the game plus the expansion. The funding closes on December 14th, and is scheduled to be delivered in August, 2015. So head over today and check it out.