We review Bullet Star, a stand-alone expansion for the Bullet board game from Level 99 Games. Bullet Star comes with 8 new heroines for you to use in this patter matching game. 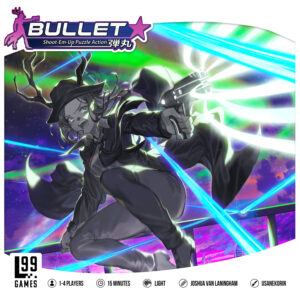 If you hop in your time machine of choice (flying DeLorean anyone?) and head way back to December 28th, 2021, you’ll find my list of my Top 10 Board Games from 2021. A surprise entry on that list for me was Bullet❤️. It’s a SHUMP game from publisher Level 99 that mixes up some clever real-time gameplay with a bit of pattern matching.

Fast forward to today and we’ll be checking out the second expansion for this game in the form of Bullet⭐. Are you ready for some new heroines to control in this excellent game?

Bullet⭐ is a stand-alone expansion, which means you don’t need the original Bullet❤️ to play it. However, I’m going to treat this one like an expansion, since the main focus here is on the new characters.

For those owning the original, the gameplay is identical to Bullet❤️. If you want the full rundown, check out my original review here. But the basics of it is that you have a unique heroine with her own deck of patterns and special powers. You’ll have a central grid that will rain down 5 colors of tokens. You’ll want to match your patterns to the tokens to remove them before they reach the bottom of the track and wound you.

Like the original game, Bullet⭐ can be played solo, cooperatively, competitively, or even with team play.

Since the gameplay is identical to the original game, the experience on that front hasn’t changed. So, I’m going to focus on the new character you can control. There are 8 new heroines with Bullet⭐ – Four classified as easy difficulty and four as hard.

Rose Blanchette: Rose is probably one of the most straightforward of the new characters. Her special ability is that her patterns can be rotated around and used. She also has a few cool action point powers: one lets her put 3 bullets back into her bag, while the other lets her gain 4 AP when she takes a wound. For new players, Rose is a great heroine to start with.

XIV – Balance: What’s unique about her is that she has no life points. When a bullet would hit her, instead, she loses two AP. If she ever has 0 action points, she dies. Other than that, her patterns and action point abilities are pretty standard.

Jane Doe: In addition to having the best character art and pun name ever (it’s a female police with deer horns. Jane DOE, get it?), she’s also one of my favorites to use. She gets three unique bullets that are put into her current, and when drawn, activate one of her special powers. One will clear any bullet on her board, another will move a bullet to any space (repeat once), and the last one will let her draw a pattern card. I really liked using these special bullets to make patterns easier to pull off or save me from taking wounds.

Vesta Jackson: Vesta has the power to send a bunch more bullets to her opponents than normal. When she clears using a pattern, instead of sending the bullets she cleared, instead, checks the highest number on the bullets she did clear, and sends that amount from the center bag to her opponent. I always tried to make sure my patterns included 3 and 4 numbers so I could send extra bullets out, instead of the usual 2.

LXVI – Memory: Now we get into the hard heroines. Memory is probably not the character you want to give to AP-prone players. She starts the game with access to all 20 of her patterns. This gives her a lot of options for getting rid of bullets. The downside though is she only has 2 life (instead of the usual 4). She does have the ability to draw patterns back from her discard, but it costs her 3 AP to do so.

Planil Lalent Talenti: Planil has a special area of her tableau called her “mind”. She can spend a star Action Point to put a bullet in her mind area. This essentially lets her save them to be used later. She can place those back on the board at any time but can’t end the round with bullets in her mind. She can also use an action power to clear a bullet from her mind, making it an easy way to get rid of a bullet she’s not sure what to do with.

Your News Network: Yup, that’s her name. Her parents must have chosen her career path for her. Regardless, her main feature is her hand of News Alert cards. She has five of them and can play one during each cleanup phase. Each of the cards will affect the game state in a certain way. These may be in the form of discarding and redrawing patterns, adding bullets to a sight, pulling bullets out of your sight, etc… The main thing to note is that each of these alert cards can either be played on you, OR all the other players. So, this player will need to analyze the boards of the other players at the end of each of the rounds to figure out the best Alert card to play.

Nawa: Probably the most unique heroine is Nawa. She doesn’t have an action board but instead has a Sous Chef. Her patterns also have no requirements, but they also don’t remove bullets. They instead will move some around the board. Her Sous Chef, Baku, has three permeant patterns. Those work just like the patterns from a deck but are always available.

Expansions like this are hard to review. It basically boils down to did you like the original game? Yes? Great, buy this! It’s more variety of the same content you loved. Didn’t like the base game? Then nothing here will change your mind. From the perspective of a fan of the game, it’s great. More content and variety with almost no new rules overhead.

From the lens of a reviewer though, it becomes a little hard to talk about. Unless any of the characters are broken, or just plain bad, it can be difficult to find things to criticize the expansion about. Which is the case here. The new characters are all unique, give variety to the game, and are fun to play with. I liked how there was not only a varying degree of difficulty in the new characters, but they also felt really unique. There is pretty much no reason not to add Bullet⭐ to your games of Bullet.