We review Bullet♥︎, a real time board game published by Level 99 Games. Bullet♥︎ is a SHMUP-inspired board game that will have you trying to clear bullets out of your sight before you take too many wounds. 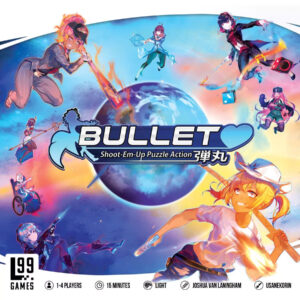 Welcome to Bullet♥︎. A board game inspired by the classic SHMUP video games. For the uninitiated, shmup is a term for “Shoot em Up”, a sub-genre of video games that include classic quarter slurpers like Space Invaders, Centipede, Galaga, and others. A game where bullets are flying fast and furious, and you are just trying to stay alive amidst the hail of gunfire.

In this tabletop game, each player controls a unique heroine who is trying to be the last left alive… or maybe work together to take down a big bad evil girl (BBEG). Bullet♥︎ offers a few different ways for its 1-4 player count to enjoy the game. So let’s get to it.

Let’s talk about the main way to play Bullet♥︎. The first thing you do is pick a heroine and seed your personal bag with 10 bullets. When you are ready to rock, you start a 3-minute timer—although you could leave this out if you are doing a learning game. Play happens simultaneously, with all players drawing bullets from their bags, resolving each one before drawing another.

Each bullet has a color and a number on it. You must place that bullet in the matching color column (5 colors in total), counting down the number of spaces on the bullet. So a yellow 4 would be placed four spaces down in the yellow column. However, any full spaces are skipped over, so that yellow 4 might end up in space 6 if you already have two bullets in that column.

If a bullet makes it down to the bottom of the track, you take it as a wound. Take too many wounds and you’re out. So how do you get rid of bullets? Pattern cards. Each heroine has a unique deck of pattern cards and if you can get your bullets to match the pattern on one of your cards, you’ll be able to remove some of them from your sight, passing them to an opponent who has to put them in their bag next round. You also have a variety of power-ups you can spend action points on to further manipulate the bullets in your sight. These let you move bullets around, activate special powers, or draw more pattern cards.

The round ends when all player’s draw bags are empty. As each player empties their bag, they can choose a temporary power-up from the supply, with the last player finished getting whatever’s left. A new round begins with some bullets added to your bag (in addition to whatever was passed to you by other players). Any bullets in a player’s sight remain there for the next round. The game ends when there is only one heroine left standing.

Bullet♥︎ is a fantastic game that I thoroughly enjoyed from beginning to end. The phrase “easy to learn, hard to master” is thrown out a lot, but it hits home here. Learning to play Bullet♥︎ is so easy. Draw from your bag, move it down, try and remove bullets before they turn into wounds. That’s the basics of it. But the hard part comes in understanding the strategy of your heroine. While they are not quite asymmetrical, they all defiantly have their own style that you’ll need to wrap your head around.

For example, one heroine is a sniper that uses a target reticule for all her patterns. While another one uses magic? to move bullets off the side and top of her sight. Another doesn’t really have much in the way of special powers, but her patterns are really easy to pull off. It’s this kind of styling that makes Bullet♥︎ one of those “one more game” type of games where you just want to try all the heroines.

Normally I try to stay away from games with player elimination because while they can be fun, no one wants to sit around bored after they’ve been knocked out. But games of Bullet♥︎ are quick, usually around 15-20 minutes. And by the time someone is knocked out, chances are most boards are pretty packed with bullets, so the end is nigh. It usually just a few minutes until a champion is crowned.

Yet, if you abhor player elimination and would rather work together, that’s here too. In addition to standard versus mode, you can also play cooperative against a villain, team play, or even solo. Sometimes when a game tries to do much, it can end up with one good mode and a bunch of tacked on modes that are half baked. But we’ve tried each of the different ways to play Bullet♥︎ and they all were great experiences. So kudos to the design team for giving us buckets of replay value here.

Now as much as I love Bullet♥︎, not all is perfect. One area that could be better is with the player interaction (at least in vs. mode), which is fairly minimal. Sure, you are sending cleared bullets to your opponent’s, but that’s about it. Most of the time, you have your head down, just trying to figure out patterns as quickly as possible.

I ended up loving Bullet♥︎. The gameplay grabbed on to me and didn’t let go. For such a simple pattern matching game, it really has a lot of legs. There are not only a wide variety of play modes, but unique heroines that have you wanting to try each and every one. While the real-time gameplay might not be for everyone, you can easily leave that out if it isn’t your thing. The rules are easy to gronk and the gameplay is quite addictive. Bullet♥︎ is one of my favorite games released this year (and I was pretty close to naming it my favorite so far) and I look forward to what Level 99 games has coming down the pipeline for this system.

Final Score: 4.5 Stars – An excellent pattern matching game with a variety of play modes that’s easy to get to the table.

Hits:
• Unique heroines all have different strategies
• Solo, competitive, team, and cooperative modes are all well made
• Easy to learn rules with a quick playtime
• Timer works well in the game, but can also be left out if that isn’t your thing