We review Axis & Allies & Zombies, a war game published by Avalon Hill games. Axis and Allies and Zombies is set in 1941 and the world is at war but the dead don’t stay dead at home or on the battlefield. 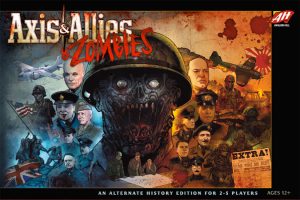 It was a little over 30 years ago when I received my first Milton Bradley Gamemaster game: Axis & Allies. My friends and I loved this game and over the course of the next 20 some years we easily played it over 50 times. The draw for us was a much more accessible game that lacked the length and weight of grognard games we used to play like Advanced Squad Leader, Terrible Swift Sword, Rise and Decline of the Third Reich, etc.

I have to admit that I never played or was really into any of the Avalon Hill Axis & Allies versions that came out in the late 90s and since. But with the popularity of Zombies, Avalon Hill brings us an alternate history edition, Axis & Allies & Zombies (AAZ).

There’s a lot to cover with AAZ so I’m going to highlight what’s different from the other Axis & Allies versions for this overview. The actual rules are here if readers want to do a deep dive: Axis&Allies&Zombies.

AAZ core rule changes:
• Eliminates the purchase unit phase; units are bought and placed at the end of turns.
• There is no industrial bombing, AA guns, cruisers, or mechanized infantry.
• Cannot purchase new industrial complexes and these are fixed, preprinted on the map.
• New recruitment centers; industrial complexes that produce only infantry units.

The primary core rule change is of course zombie units. No player controls them directly and they are generated from the Zombie Deck or when an infantry unit is destroyed for any reason.

I still own my original Axis & Allies, but it rarely gets to the table. To be honest, the game feels dated and unless my group is feeling nostalgic, it stays on the shelf. Now, AAZ comes along and people jumped at the chance to review this with me. Honestly, the zombies bring a neutral element that makes the game feel fun again. No players control the zombie units but this third element is a welcomed addition in my book because you just cannot account for enemy units – you now also need to account for zombies.

The zombie deck is the primary means for how zombie units get onto the board each player turn and is the best part of this game. The deck places these units randomly from the cards Desperate Times section on either the Axis, Allied, and even neutral territories with an IPC value. The occasional Zombie Escalation card has you draw multiple cards on your turn and then, similar to Pandemic, has you shuffle the current discard back into the deck so territories that already had Zombie Units added could be hit again.

Now, the rules state that the Desperate Measures section of the Zombie Cards are optional, but I have no idea why you wouldn’t use this section; it’s too fun not to. This will, at times, move or eliminate Zombie Units, but mostly it will give either the Axis or Allies players Anti-Zombie Technology. This tech is similar to the technology advancements but is specific to destroying or moving zombie units. Some seem like something out of a B-Horror movie, like Chainsaw Tanks, but overall gives you a cooler way to destroy Zombies.

Another new addition that compliments AAZ well are the Recruitment Centers. Unfortunately for the Axis player, they will have none while the Ally player(s) will have these available in India and Szechwan. These are Industrial Complexes that produce only Infantry Units and since these are the only units that can create zombies from casualties – this is a nice way to get more Zombies onto the board and into Asia.

As much fun as this new edition is, there are issues with this game that stop it from replacing my original version. The rules are fairly straightforward but there are grey areas and unfortunately centered on direct attacks to zombies controlled territories. I did a thorough online search but most posts or videos did not clarify it. Since there is no current FAQ or any errata yet this would obviously help clarify and avoid the periodic bog downs in each of our plays.

The other big negative is the lack of pieces that come with AAZ. You will likely run out Units and especially Unit Stacking Counters in the later rounds. I understand that this version has a lower price point and I’m sure most gamers appreciate that but I bet many would pay a few more bucks to have enough units included. For the Axis, Allies, and even zombie units we either had to go without or used control markers as a substitute (mainly for zombies).

The last negative was the end game victory when a zombie apocalypse occurs. This was anti-climactic and rather unsatisfying. If zombies gain 25 IPCs by the end of a round, each side gets one more turn and the side with the highest total IPC income from zombie-free territories wins. It basically initiates a last turn zombie-free IPC grab where players will do silly things to achieve zombie-free IPCs. Honestly, no side should win if the world is overrun by zombies.

I will be blunt, I was very skeptical that I would like Axis & Allies & Zombies. I didn’t expect that the neutral element would add to the game play; but it did. The additions of the zombie deck and tech make the game fun again and elements like the Recruitment Centers are great additions that really compliment this alternate history version.

Now what really holds back Axis & Allies & Zombies from scoring higher are some grey areas in the rules that need an errata or at least FAQ to help the game run smoothly. The big issue for me is the lack of units and especially unit stacking counters in this version. And lastly the zombie apocalypse end game is anti-climactic and unsatisfying.

Final Score: 3.5 Stars – An alternate historical twist that breathes life back into a classic game and makes it fun again.