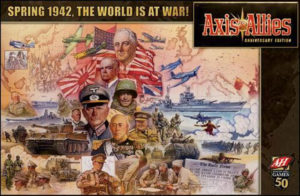 If you are any kind of board gamer, chances are you’ve at least heard of Axis and Allies. This war gaming staple has been gracing gamers’ tabletops since 1981 and has bounced around from a few different publishers, the most recent of which being Avalon Hill. To celebrate their 50th anniversary as a publisher, Avalon Hill has released the Axis & Allies Anniversary Edition. While the core of the game play is solidly Axis and Allies (A&A), there are a few new wrinkles in this edition that might make it the best version of this classic game yet. Let’s find out if it does.

Chances are you already know how to play Axis and Allies so I’m not going to bore you with a lengthy gameplay overview. For those of you that aren’t, I’ll give you the quick basics. You can also download a PDF of the rules here.

Axis & Allies is a war game set during World War II between the Axis powers of Germany, Russia and Japan against the Allies of Great Britain, Russia and the USA. The Axis and Allies Anniversary Edition comes with two ways to play. Either 1941 or 1942, depending on what period of the war you want to use. They each feature different setups and turn order, but other than that have the same core gameplay.

The basic turn structure is as follows:
1. Production: Use your money to decide what military units you want to buy. You can also try and research new tech by buying research tokens. You get a roll for each token you have, a 6 is a breakthrough. New in this edition is that you keep your research tokens until you make a successful roll.
2. Combat move: Invade other countries and territories. Most ground units move only 1 space, ships 2 spaces, and planes 4-6 spaces.
3. Combat: All combat is handled with six sided dice. Every unit has a combat value for attacking and defending. You roll a die for each unit and compare it to their combat value. If it’s equal or less, you kill an opposing unit (chosen by the owner).
4. Non-combat move: You can move any units that didn’t move in combat. Planes that attacked must now land at a friendly territory or carrier.
5. Place New Units: Place any units in a space you control with a factory. There is a limit to how many units can be placed in a location.
6. Collect Income: Your money (IPCs) is determined by the territories you control.

The turn order is based on the version you are playing, but it usually alternates between Axis and Allies players. The game ends when one side captures enough victory cities (13-18 depending on which you chose).

I’m not going to spend this entire section talking about the core game play of Axis and Allies. As the game has been around for over 30 years, there are a plethora of articles already should you want more information about basic game experience, which is largely unchanged. Instead, I’ll talk about what makes this edition unique and if it’s an improvement. However I will say though that Axis and Allies has aged well and is still a fun game to play, even after more than three decades. If you’ve never played this classic war game before, you should carve out a few hours to do so. It’s worth it.

One of the biggest changes in this edition of A&A is the inclusion of Italy as a playable country. Now scaling up to 6 players, Italy is its own Axis power, having previously been under control of the German army. While they are far from a powerhouse, they do have a unique role. Italy is around to take the pressure of Germany’s southern front. They start with a decent navy and control of the Mediterranean Sea. But I think that their most vital role will be to either support German forces on the Russian front, or to wage war in Africa, or maybe both. That being said, the Italian player will most likely have quick turns and feel the weakest of all the powers.

China is now its own country as well, but in control of the USA player. However, they have strict rules about what they can do and build. As China was not an industrialized nation at the time of the war, the game reflects that. They only produce limited ground troops and can only attack 3 specific territories. I see China as being the whipping boy of Japan, perhaps existing solely to take pressure off Russia’s Eastern front or slow their advance into India.

One of my favorite additions are the National Goals. These are historic goals for each player to try and accomplish, usually taking over specific territories. Doing so will yield extra IPCs for the player. This is an optional rule that players must agree to use at the start.

While I do think this is a great version of Axis and Allies, it does have a few flaws in regards to its components. The first is that while the miniatures are probably the best of the series, some of the ships are REALLY hard to distinguish. Trying to tell the difference between the destroyers, cruisers, and transports was painful. Some kind of guide would have been much appreciated as the silhouettes didn’t always match up the battle board.

Secondly, I never am happy to see paper money in a game. It’s a dated component that rarely holds up to repeated play. I’d ALWAYS prefer cardboard tokens instead of paper as they can still look like dollars, but are must more sturdy. Only one game has ever done paper money right and that’s Millennium Blades. Other than that, the production values are pretty solid in this edition. The game map is a large, three piece board that will take up a lot of table space.

Axis and Allies isn’t a game for everyone. You are looking at a 6 hours play time unless you are a seasoned veteran. That being said, it’s still a great example of a historical war game that, while not light, is still very accessible as far as the genre goes. It’s a game that has a place in the annals of tabletop gaming and title that is still aging gracefully even after almost 3 decades.

The question for current Axis and Allies players is if this game is worth an upgrade on their well-worn copy. If you are a fan of the game, I’d say that it is. I enjoyed many of the changes in this edition, including the better components. Many of the stats and costs of units have also been adjusted, allowing for a lot of new strategies to be tested out. And since you can play either the 1941 or 1942 version of the game, the Axis and Allies Anniversary Edition boasts a ton of replay value, if you can book the free time to play it that is.

Final Score: 4 Stars – A great edition of a classic war game gets a much appreciated overhaul. While not perfect, it’s probably one of the best versions of the game.

Hits:
• Tweaked and updated rules
• Now supports 6 players
• Two versions of the game in the box
• Love the new missions

Misses:
• A unit guide would be helpful
• Paper money
• Need to carve out a lot of time if you even hope to get a game in