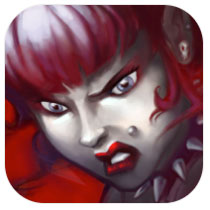 There is little argument to be made that Zombicide has been a cash cow for board game publisher CMON. Since the original kickstarter in 2012, Zombcide has seen numerous expansions and two different rethemes (fantasy and scifi). After playing countless hours of Heroes of Nomandie on my iPad, I always thought more tactical minis games should make the jump to digital.

Thankfully, Asmodee Digital agreed and Zombicide: Tactics and Shotguns has made its way to our iPads and Android tablets. While not a straight one to one conversion of the board game, it clearly draws a lot from the original tabletop game.

If you’ve ever played a Zombicide game, then a lot of the core gameplay remains unchanged and you’ll easily be able to jump right in. If you are brand new to the game, the app will walk you through the first few missions to help get your feet wet.

Zombicide: T&S offers a 40 mission, single player campaign for you to play though. Each mission will have a variety of objectives, but most boil down to searching for items and killing zombies. Each survivor on the player’s team gets three action points to use per round. An action point can be used to move to an adjacent space, pick up an item/objective, open a door, or fight zombies.

Combat is handled via dice rolling, with each survivor’s weapon and character level determining the range, dice, and damage. There are actually four classes of survivors, each of which specialize in a different area. For example, butchers target a lot of zombies in an area but don’t do a ton of damage, while assassins do a lot of damage, but only to one zombie at a time.

After the survivors go, the zombies will move and spawn. For the most part, zombies only gain one action point a turn, so they are either moving or attacking. This means that survivors are usually safe as long as they don’t end their turn in a space with a zombie. Fast zombies (runners from the tabletop game) gain two actions per phase, so you have be aware of where they are on the map.

After each mission, survivors will earn food, that can be used to upgrade their characters and weapons.

Overall Zombicide: Tactics and Shotguns is a solid adaptation of the tabletop game. Almost all changes from the tabletop version were for the better in my opinion. For example, gone are needing specific weapons to take out “Fattys”, now they just have lots of extra hit points. This would have been a huge chore to track in the tabletop game, but with a digital app, HP tracking is offloaded to the app and it works well.

The levels, while they do reuse many art assets, are laid out in diverse and interesting ways. Missions will range from having the survivors exploring areas all over the map, to just trying to rack up a high zombie kill count. Things are almost always kept interesting, so expect to backtrack or head to areas you weren’t expecting to go to as you accomplish objectives and reveal new ones.

Zombicide has always been about mindless dice rolling and killing hordes of the undead, and thankfully the app embraces that spirit. There are plenty of levels where you will be slaughtering the undead by dozens. To help with that, once you get a character to level 5, they can dual wield weapons, letting you attack with both at once. My butcher with two sawed-off shotguns can make mincemeat of a room full of undead (which is a ton of fun).

Despite being mostly about killing the undead, players do need to think strategically about how they approach many of the levels. Just storming ahead or splitting the party can easily get you overwhelmed. This is doubly true later in a mission when spawn levels are in the red. Players need to plan their routes, be mindful of spawn zones and the routes the undead hordes will take. Taking all of this in leads to an enjoyable turn-based tactical game where players will need to constantly be wary of what’s going on around them.

Originally I was concerned about this being a single player only, campaign based game. However, you can expect to spend many, many hours beating the campaign, and can even replay any levels you want. So there is no shortage of time for you spend in the app. That being said, the ability to play a randomized mission would be a welcome addition.

My main gripe with the app though has to be the randomized weapon drops. Character classes are restricted to specific weapon groups, and you don’t manage to find any good weapons for that group, the character will definitely be lagging behind in the damage department. My roller skating waitress really needs a good weapon, so she’s rarely tapped to go on a mission.

Finally, the app does have some IAP for extra characters. However, at $1.99 a piece, they do feel kind of pricey for what you get. And I’m not even sure they are wholly necessary unless you really want to add more characters of a specific archetype.

Zombicide: Tactics and Shotguns is an excellent adaptation of an already fun tabletop game. Any changes made from the jump to digital were for the best in my opinion. While there is no multiplayer or random levels, the campaign is long enough to satisfy most gamers. Plus, I assume Asmodee Digital will be throwing out additional campaigns as IAP should the app sell well enough. For fans of the tabletop game, Zombicide: Tactics and Shotguns is worth getting.

Final Score: 4 Stars – A great adaptation of a tactical minis game on our tablets for those who want to get in their fix of undead slaughter.

Hits:
• Lots of zombie killing
• Campaign is long and features diverse levels
• Players will need to think strategically about their team and paths through levels