The Quest for El Dorado Heroes and Hexes Expansion 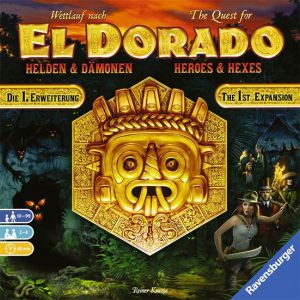 We, as a species, are creatures of habit. Almost all of us cherish certain routines and rely on the consistency of experiences to perpetuate our comfort from one moment to the next. In game playing and buying, this can reveal itself in a variety of ways.

Your’s truly is firmly in the “expansions are cool” crowd. Usually.

Ravensburger, publisher of The Quest for El Dorado, is on the hunt for a fabled city where the streets are lined with customer dollars once again. This time out, they’re releasing an expansion for the aforementioned game, called Heroes and Hexes, with a theme that encourages asymmetry and aggression. We’ll see where this goes.

There are three primary components in this expansion: spaces which punish players with curses, familiar cards, and hero cards available from the “Hero games tavern” (exactly how it’s listed in the translated from German rules).

The new “demon” spaces require players draw a face down curse token. Some of the effects will resolve immediately and some will be lasting. These usually move an adventurer token back, block some movement, or discard cards. There is also the potential to draw demon cards which do nothing but fatten your deck with useless chaff. One possible highlight from demon spaces is that some are on top of tunnels providing shortcuts.

Lightening the game are new familiar cards. These are single cards added to a player’s deck from the beginning. They’re very useful and can even give a player a single, one-time-use bonus for that extra push at just the right time.

The other side to this expansion are the hero cards. These provide powerful, game changing bonuses. However, obtaining these is not part of the game setup. Players must make a visit to the “Hero games tavern” to acquire one of these cards, and they are only allowed one acquisition for the whole game.

Finally, there are four new piles of expedition cards to purchase during the game. These are mainly used for specific spaces on the new boards.

As mentioned in the introduction to this article, expansions can polarize the gaming market. When a game sorely needs an expansion and just the right additive of rules comes along, it makes a game worthy of play only when the expansion is used, aka, a game saving expansion.

In this case, the publisher should put in big bold letters the word “OPTIONAL” on the box cover. For every good idea in this expansion, there are missteps or elements that make for grievances or groans at the end of the game. Here are some examples:

Heroes need to be hired from the tavern. This is something different in deck building in that players must visit a location that doesn’t form part of the path. They’re giving up time to acquire (hopefully) a hero that gives them a huge leg up on the competition.

The problem is that the hero cards are revealed randomly. This is probably to prevent players from picking the same one each time. This also begs the question “why not allow players to choose these from the start?”. The answer is that some players might get their hero card in their opening hand and get a huge boost at the beginning of the game. So far we’re deep into complications.

Another niggling problem with the heroes are their names. This is a non-issue for players who never read flavor text or character names, but it definitely made for eye rolls for yours truly. Masochistic readers who love pop-culture references should check these out in the game manual.

Finally, the demon spaces would seem to be a great addition to the game. They’re punitive, but can also offer opportunity for quicker progression than going through other spaces. The challenge here, once again, is that the punishment revealed from the curse tiles are random. A penalty implemented on one player may be lighter in effect than on another player. The Quest for El Dorado was already a light(er) deck building game, but the addition of this randomness makes for a more swingy game with a push-your-luck aspect. Once again, this is not the most perfect implementation.

The base game, The Quest for El Dorado, is a great game. If it really needed anything, it was more expedition cards and the creation of a randomized setup of expedition cards. This would allow players to strategize their card purchases versus the terrain challenges on the board. This is some of the most delicious meat of any game that uses a board movement component along with deck building. Alas, this the Heroes and Hexes expansion focuses on things which could be interesting but only for the right group. It has turned this gamer from the “expansions are cool” variety to a new camp: “expansions are highly suspect until played.” Players willing to put up with some annoyances in implementation will find the variety added into The Quest for El Dorado appealing.

Hits:
• Curses make for some variety in play
• Heroes are great for even more deck choices
• Expedition cards that work with new board spaces 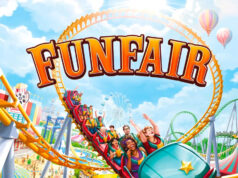