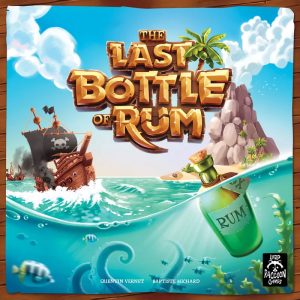 Yo, Ho, Ho, it’s a pirate’s life for me. OK, maybe not. While I don’t actually want to be a pirate (I’m sure it’s not a glamourous as in the movies), I do love it as a theme. Tall ships, open seas, fierce combat, a bottle of grog…what’s not to love?!

Speaking of, are you ready to set sail on the blue waters of the Caribbean in search of buried treasure? Because that’s the theme of today’s review of The Last Bottle of Rum. It’s a pickup and deliver game published by Lord Raccoon Games. So, let’s head out to the archipelago and see if this is a game for you.

The goal in The Last Bottle of Rum is to be the first pirate to earn 10 loot points. Each player will control a pirate ship as they set sail in search of buried treasure. On a player’s turn, they must play two cards from their hand. Every card will have 2-3 action icons and special ability text. Players can resolve all or some of these effects. The different action icons include:

Card effects vary from stealing treasure to free moves to attacking other players. Most card effects require you to spend coins, while some also gain you curses. When a player gains their 5th curse, or the Kraken card is drawn from the action deck, the Kraken attacks the player(s) highest on the curse track, who must lose loot equal to a die roll.

And that’s about it. There are a few optional rules like bounty quests and weather events. But players will alternate taking turns in this manner until someone wins.

The Last Bottle of Rum is not a hard game to learn and get to the table. For the most part, all the action icons make sense—move, shoot, collect, repair. Easy peasy. In essence, this is a pickup and deliver game with a solid amount of “take that”. Is that good? Well, that will depend on what your group likes. I’ve found that “take that” is definitely one of the more polarizing mechanics in gaming. If your group hates it, then this definitely isn’t the game for you.

But what about the rest of us? Well, I’m still not sure because I struggled to enjoy this game in a few ways. My first concern is that the early part of the game is very random and kind of slow. You would think exploring the archipelago would be fun… but it’s not. The enjoyable part of exploration is the thrill of discovery, finding something new and interesting. Most tiles in The Last Bottle of Rum are the same: an island with no special properties. You are basically looking for one of the locations of the 3 treasure cards and that’s it. There are 30 island tiles in the game and, conceivably, they could all be on the very last 3 tiles you turn over. And if you are not picking up treasure in this game there is very little else to do… other than attaching your opponents.

But even combat wasn’t very thrilling. Pay a gold, roll the die, do up to 2 damage. You can only attack each player once (which makes sense for balance reasons), but you also don’t get much for attacking someone, other than slowing them down a little. That left combat feeling rather mundane. It was something to do if your opponent happened to be near you rather than something to seek out. Now there are a few action cards that let you steal treasure with a successful attack, so sometimes there is a benefit, but you’ll need the card to benefit from that.

Once the tiles are all explored, the pace of the game does pick up some. All the treasure locations will be known, so you can make a beeline here and there to grab some loot. I will say that I wish there were some iconography on the tiles, because whenever a new treasure location was revealed, it became a Where’s Waldo of trying to figure out which was the right island. But once you’ve finally grabbed some loot, it’s just a matter of taking it back to pirate’s cove to score some points…

That is until the Kraken attacks. For the most part, we felt like the Kraken was more frustrating than fun. Getting hit from that beast cause you 0-2 loot points, which gave the game two steps forward, one step back feel. All it seemed to do was extend the length of a game that really didn’t need it. The playtime for The Last Bottle of Rum is listed at 60 minutes, which just feels too long. The game is somewhat random and you are essentially doing the same thing over and over. By the end we were all ready to be done. I think 30-45 minutes feels like a better timeframe for this title.

Finally, I will say that the production values of The Last Bottle of Rum were excellent. Illustrator Baptiste Michard did a fantastic job with the artwork in the game that will definitely help sell copies of the game. His drawings were whimsical and full of life. I am definitely looking forward to seeing his work on more games in the future.

Negative points with the game aside, my biggest issue is I struggle to find a place for The Last Bottle of Rum. It feels like any role it might fill is already taken by a better game. Pick up and deliver: Black Fleet. Ship to ship combat: British vs Pirates. A casual, family weight game: Treasure Island. An overall pirate experience: Merchants and Maunders.

So that leaves The Last Bottle of Rum looking to carve out a role in a genre that already has some solid contenders and no shortage of other challengers. And for this reviewer, I just didn’t feel like the gameplay grabbed me enough to want to return to these waters anytime soon.

Misses:
• Repetitive gameplay that goes on a bit too long
• Kraken more frustrating than fun
• Exploration and combat were both uninteresting