We review the new game of fun in the Caribbean, Black Fleet. This new game by Asmodee Games has players controlling a pirate, merchant and navy ship on the high seas trying to earn their fortune. With some easy to learn rules and great components, Black Fleet is worth a look. 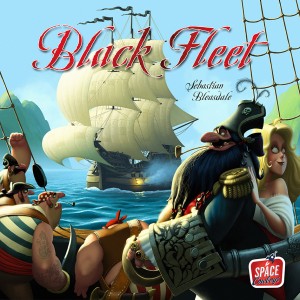 It’s the golden age on the high seas, when tall wooden sailing ships roamed the earth plying their trade. You, a commander of a flotilla of ships on behalf of your nation, must try and earn your fortunes in the blue waters of the Caribbean. But be careful, as you are not the only nation vying for control of these islands.

That’s the theme of Black Fleet, a new game from publisher Space Cowboys (distributed in the USA by Asmodee Games). You must take control of your ships to sell goods, rob merchants and sail your way to victory. Is this game of piracy and trade any fun? Let’s find out!

Black Fleet is a nautical pick and deliver game for 3-4 players that takes about 45-60 minutes to play. Black Fleet plays well with any amount of players.

In Black Fleet, you are trying to be the first player to flip over your victory card by paying the 10 doubloon cost. But how do you get those shiny metal coins? One way you can earn doubloons is by transporting goods from port to port with your merchant. You can also use your pirate to steal goods from opposing players’ merchants and bury them in the sand (naturally). Finally, you can also send the navy ships around to sink opposing pirates, earning you a bounty.

As you earn these coins, you’ll be buying upgrade cards for your fleet. These upgrades will let you break the rules in unique ways. Once you’ve bought all four of your upgrades, you can then buy the victory card. Buy that and you win.

The game components in Black Fleet are nothing short of stellar. Included with the game are a number of excellently sculpted ships for the players to use that not only look great, but actually hold the goods cubes that the ships are transporting. It’s this kind of attention to detail that makes me a fan of a publisher.

As mentioned earlier, the game comes with 20 metal coins in both gold and silver color. I do love when games use metal coins as opposed to the standard cardboard tokens. Finally, the game comes with a few sets of cards: Movement, fortune and development. These are well illustrated with thematic artwork that I feel really fits the game play style. They have an almost cartoonish look, which works well for the nature of the game.

Game play in Black Fleet is fairly simple to pick up. Each player is given a color and collects their merchant and pirate ship. The two navy ships (yellow and purple in color) are placed on their starting spots in the center of the board. Each player is dealt out 4 random development cards and a victory card. Finally, each player places their merchant on the board and fills it up with 3 goods from the starting port they have chosen.

Starting with the first player (whoever was assigned the black ship), each player takes their turn in a clockwise manner.

Also, before, during or after a movement, a player can take an action with the ship. The different actions are:
Merchant: Deliver goods to a port. The player collects an amount of doubloons for each good delivered equal to what the port pays out (2-3 coins). They then immediately refill their merchant with 3 goods from that port.
Pirate: If next to a merchant, steal one good and collect 2 doubloons, or, if next to a pirate beach, bury the good on your pirate ship earning the coins indicated.
Navy: If next to a pirate ship, sink the pirate earning 2 doubloons.

At any time during their turn, a player can play fortune cards from their hand. These are essentially action cards that let you break the rules in various ways.

After a player has taken all their actions, they can buy one development card from those in front of them. These, once bought, will give players special powers to use for the rest of the game. Examples would be moving faster, being able to attack with their merchant or shooting from a distance.

Once a player has finished their turn, they draw a new movement card and possibly some fortune cards (depending on the movement card played). The next player then takes their turn.

Overall I found Black Fleet to be a fun adventure on the high seas. The game play isn’t deep by any stretch, but it does dump a healthy dose of player interaction on you, which I enjoy. Black Fleet is not a game where you can just sail from port to port and keep your head down. You will get robbed, you will get sunk and for the most part, there won’t be any hurt feelings with that.

That’s one of the nice things about Black Fleet; no one should take it personally when they get attacked. Even if your merchant gets robbed, unless you are heading to the far corners of the board, the movement cards are high enough in value where you should be able to make it to the port before you lose all your cargo. And if your pirate gets sunk by the navy ships, no big deal. It comes back on the board next turn ready to plunder to your heart’s content.

And that’s what makes Black Fleet such a great family game. Even when you are getting attacked, the consequences for the player on the receiving end are fairly minimal. Yeah it’s annoying to lose a cargo cube, but another one is always just around the corner. This crowded bit of the Caribbean is always ripe with targets for your pirate or navy ship.

Which leads me to one of the draw backs to Black Fleet and that’s the player count. Unfortunately, Black Fleet requires at least 3 players to play. I understand why they did it, as the interaction between players is key in this game. But part of me wishes they would have made the game board two sided and just put a smaller map on the back. I know that people are already tossing around a 2 player variant of the game, so that shows there is a demand for it. Who knows, maybe Space Cowboys will give us an expansion someday that will allow 2 players to sail these seas. It worked for Space Cadets: Dice Duel with their Die Fighter expansion.

Being such a family friendly game, it shouldn’t come as huge surprise that Black Fleet tosses in a healthy dose of luck with its game mechanics. The movement cards, and sometimes fortune cards, can make a big difference in what players do on their turn. Some turns you might really want to move that yellow navy ship, only to have a hand full of cards that restrict you to the purple. I’ve seen one game end where a player was literally one spot away from a port that would have given them the win, but both their movement cards in their hand just didn’t have enough.

Fortunately, in a game like Black Fleet, luck smacking you around like that is not a really a huge deal. Black Fleet is not a strategic game by any stretch. The board will change so much between your turns, that it’s almost pointless to pre-plan your actions more than one player in advance. That tasty merchant ship that was only one space away from your pirate at the end of one players turn might be on the other side of the board by the time your turn rolls around. In that way, Black Fleet is definitely a more tactical game. You will be reacting on your turn to the situation at hand, rather than planning your moves six turns in advance.

Even with all these little quirks they are really only minor gripes in a game that’s incredibly fun to play. For some reason moving your miniature ships around this tropical board is such a joy. It could be that the game turns go by very quickly so there is minimal down time. It could also be how easy it is to just jump in and play Black Fleet. If you are spending more than 5 minutes on the rules explanation, you are doing it wrong. All that combined, along with the incredibly satisfying theme; make Black Fleet a game that’s constantly finding its way onto my gaming table.

In case you couldn’t tell, I really enjoyed my games of Black Fleet. Between the fantastic components and the great theme (I almost always enjoy a game on the high seas), I was addicted from turn one. Move your ships, sink the pirates and rob the merchants, it’s all just makes sense and the clutter is kept to a minimum. It’s this kind of tight game design that allows you to play Black Fleet with just about anyone. While I hesitate to call it a gateway game, it’s absolutely non-gamer friendly and will make a great family game. On the other side of the coin, even your hardcore gamer friends can find a lot of enjoyment in these blue waters.

If you are looking for an enjoyable experience in the Caribbean, then look no further than Black Fleet. I hadn’t heard much about this one before its debut at Gen Con 2014, but after playing a few times, I’m absolutely making a permanent home for this one in my game library. While I wish there were rules for 2 players, which does hold the game back a little, Black Fleet does a lot of things right and is worth checking out.

If you are interested in getting a copy for yourself, you can get it for about $45.

Final Score: 4 Stars – A fun clash in the Caribbean with a high amount of player interaction and a fantastic theme.

Misses:
• 3-4 players only
• Luck can frustrate at times