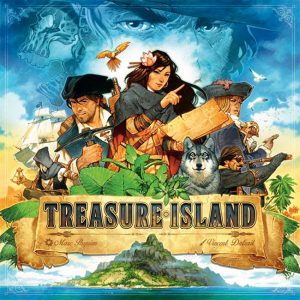 There are a couple of themes in board gaming that always seem to capture my attention and pretty high on that list is a good pirate game. From minis games like Rum and Bones to tactical sailing games like British vs. Pirates, to little filler games like Port Royal, I have more pirate games in my collection than I care to admit.

Yet there is always room for one more, right? Enter Treasure Island, a semi-cooperative game designed by Marc Paquien and featuring some fantastic artwork from Vincent Dutrait. One player takes on the role of Long John Silver, and the rest of the players are pirates hunting for his buried treasure.

The player who is Long John Silver starts by secretly selecting a spot on the board to bury his treasure. He makes a mark on the map behind his screen…X marks the spot. Then each other player, the pirates, gain one clue as to where the treasure is NOT, and the adventure begins.

The game is broken out into 17 calendar days, with each day being a single pirate turn (note: Long John Silver is not a pirate). On 6 days throughout the 17, Long John Silver will first provide a public clue to the pirates. Twice during the game, he may bluff–either lie about its veracity or actually tell the truth. After the clue is given (if necessary), the active pirate takes their turn.

A pirate gets either 1 or 2 actions (depending on the day). Actions include moving and doing a small search (use the small ring), performing a large search (the big ring), or moving twice. When a pirate searches, they use the appropriate ring to draw a circle on the board. If they treasure is located in that ring, they win. If not, the hunt continues.

There are some other actions sprinkled throughout the game, such as checking the veracity of one of Long John Silvers clues or using one of your pirate’s unique powers.

Treasure Island was a game I did not expect to like as much as I did. It combines a bunch of mechanics that I usually don’t care for in games: 1 vs many gameplay, hidden movement, players screens (I have an unnatural aversion to them). Yet I can whole heartily say that despite my usual hangups, Treasure Island is an absolute blast to play.

Publisher Matagot took the theme of hunting for a pirates treasure and really ran with it. The board is illustrated to look like a map of a tropical island, and the players get a ton of cool toys to play with. There are rings and rulers to use to draw on the board (that’s right, you will be drawing all over the game board) and there is even a wooden compass to draw circles. Everything about Treasure Island really helps bring the theme home.

But all the cool components in the world wouldn’t matter if the gameplay wasn’t there. I’ve found that it doesn’t matter if you are Long John Silver or a pirate, the roles are both just as entertaining. As someone who used to DM a lot of Dungeons and Dragons, I naturally gravitate towards the Long John Silver role. I love knowing all the information and choosing what I dole out to the pirates. Strategic use of your two bluff tokens are essential in this role, because you can’t always lie with a bluff token. And knowing what to tell as well as what not tell are both equally important.

With that being said, Long John Silver is definitely a role you want the most experienced player to take on. Give out the wrong clue at the wrong time and the map can shrink pretty quick, making things easy on the pirates. But even with an experienced player in the role of Long John Silver, winning will be hard. I’ve played a ton of games of Treasure Island and not won a single time as Long John Silver. I’ve come REALLY close, but no marks in the W column. And you know what? That hasn’t dissuaded my love of the game in the slightest. Even if things seem to be slanted towards the pirates, the gameplay will still have you coming back for just “one more game”.

When playing a pirate, you will almost always feel lost. The clues are just vague enough to confound you, and once Silver gets the ability to bluff, you hate to waste one of your precious actions checking if a token is actually a bluff. Yet, thanks to the fact that some clues will be hidden for only 1 player, there is also group psychology in play here. I’ve seen players get a secret clue late in the game and immediately head off in one direction. Other players, watching closely, will converge on that pirate thinking that they know something. Yet that same pirate will then zip off in the other direction, causing doubt in the minds of their fellow players. I love watching the pirates try to confound each other when they get a piece of unknown information.

As much fun as I’ve been having with Treasure Island, it does have a few rough spots. The rulebook isn’t all that good (I’ve heard they released an updated one as a PDF), leaving numerous questions open. I’ve also had my wooden compass break (which Matagot did replace). But one of the biggest issues is that some of the markers are hard to see on the board. I really wished they found a way to use brighter markers, because the players using blue and green need to have decent eye sight.

Despite my constant losing streak as Long John Silver, I absolutely love Treasure Island. The thematic nature of the game comes through in spades, and drawing all over the game board feels not only unique, but it brings out my inner pirate doodler. The game is accessible enough that I’ve been able to play with with friends and neighbors, who have all enjoyed the deduction and social aspect of the game. If you love deduction games, messing with the minds of your fellow players, or even just talking like a pirate, Treasure Island is a gem that should be in everyone collection. ARrrrrrgghh!

Final Score: 4.5 Stars – A thematic romp in search of buried treasure that both highly entertaining and very accessible.

Hits:
• A unique take on the deduction genre.
• Excellent artwork and components
• Engaging and easy to learn gameplay
• Fun messing with your fellow players

Misses:
• Some marker colors are hard to see.
• Rulebook could be better.