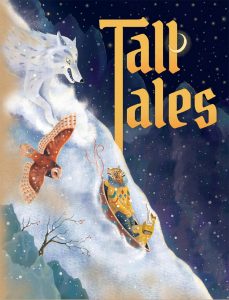 One of my favorite types of games to play are thematic ones. While I can appreciate the strategy behind an engine builder or a cube pusher, it can also be hard to draw people in when the theme is pasted on. Today we are going to look at a game that’s all about the story.

Tall Tales, which launched today on Kickstarter, is a competitive storytelling game for 3-12 players. Do you love to craft a story or build a world for others to enjoy? Then this might be the game for you. Let’s find out.

In Tall Tales, you are trying to be the best storyteller of the group. The game is played over three rounds in which players will write a story based on prompts from the game. Tall Tales begins with an unscored round where the players begin to build the world. One player draws a quest card and flips over the prompt. Then, each player has 3 minutes to write a response to the prompt/quest.

Once everyone is ready, the responses are collected, shuffled, and passed out randomly to each player. Players then take turns reading the response that was handed to them. After all of them have been read, players secretly vote on which one they liked the best. The response that got the most votes becomes the quest for the group’s tale, with the player who wrote it becoming the storyteller for the next round.

Scene rounds work similar to the quest round. To start, the Storyteller draws three phrase cards, three superlative cards, and chooses one of each. So a phrase might be “Like all great cowards” with the superlative being “Most destructive character flaw”. The superlative is important because it creates the condition that players will score each other’s scenes on. The phrase itself is required to be in the scene players write. Once all players are ready, they have five minutes to write their scene.

Afterward, voting happens just like in the quest round, except players earn points now. Players earn one point for every vote their scene gets, one point if it wins, and one point if you voted for the winning scene (no voting for your own entry funnyman…). Scene rounds two and three play out the same as the first one, with the game ending after round three. The player with the most points wins the game and reads the full tale out loud.

I have not played a competitive storytelling game before, but I think Tall Tales will definitely appeal to fans of the genre. It not only creates an outlet for players to get creative, but it also manages to sidestep some pitfalls of other games involving player voting. This is because the superlative card helps keep players in check.

In voting games like CAH or Apples to Apples, players will usually just vote for whichever response is the dirtiest or most outlandish, making the gameplay pretty pointless. With Tall Tales, you really need to pay attention to what the requirements are, as that’s how your scene will be judged. You might have a page of creative writing, but if you fail to have the “best political intrigue” then you aren’t going to score any points.

I think it goes without saying that Tall Tales won’t be for everyone. This is definitely a game where the group dynamic is going to go a long way into how much fun the game is. It’s a creative game where players can get as wild as they want, yet there are enough guidelines to keep the game from going too far off the rails. Still, we had the best experience when players injected a good amount of humor into their scenes. It’s not a creative writing class so style points count. I also think that this game will play better with more players. Due to COVID restrictions, we were not able to gather a big group to test it out, but I’d imagine it’d play great with bigger groups—especially since the gameplay is mostly simultaneous.

Finally, I do want to talk about the art in the game. Overall the components are pretty sparse, as to be expected, but the big prompt cards were really well done. The unusual art going a long way into sparking our creative juices. I’m not sure who the artist was (there were no credits in our prototype) but hats off for creating immersive art that had me thinking back to the wonderful art from Dixit (Marie Cardouat).

I could see Tall Tales being a game that you play around a fire pit on your patio while enjoying a cocktail with your friends, or even as an exercise in a creative writing class. All you need is a pad of paper, a few cards, and you can jump right in and start creating. If you enjoy writing and stretching those mental muscles, then Tall Tales is worth checking out.

If you are interested in getting a copy of Tall Tales, it launched today on Kickstarter. Head over to their campaign page for more information, or to become a backer.