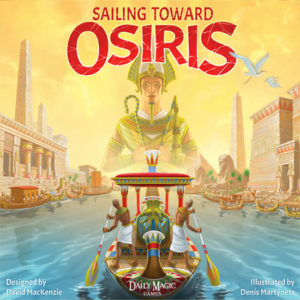 Daily Magic Games is quickly becoming one of my favorite publishers. I LOVE the Valeria series, with Valeria: Card Kingdoms replacing Machi Koro in my collection and Villages of Valeria (review here) becoming one of my family’s most played games. I also played (and enjoyed) Food Truck Champion as part of our Kickstarter Preview published in February. I immediately backed it and, assuming a timely delivery, it will be waiting under our Christmas tree for my daughter (shhhh… don’t tell her).

When I was presented the opportunity to do a Kickstarter Preview for Daily Magic Games’ Sailing Towards Osiris, I jumped on it…well, not literally, as it was a prototype and I didn’t want to damage it. But I was very excited to be given this preview!

Sailing Towards Osiris is a game that simulates the building of monuments and tributes to win an election… sort of like in the United States, except in Egypt.

The Pharaoh has died and he has no heirs. Governors (the players) have four rounds to build the greatest tribute to Osiris in honor of the recently deceased Pharaoh, with the wining governor becoming the Pharaoh’s successor.

At the start of each of the four rounds, players will draw laborers from a bag and hide them behind their screen. Laborers come in three flavors professions: farmer, brickmaker and stonecutter. In addition, each profession has one master laborer, which is more powerful than the basic laborer. Then all but a couple of the remaining laborers are placed on the board for hire.

Next, players take turns doing one of ten available actions:

After four rounds, the Pharaoh’s barge reaches the Temple of Osiris and the game ends.

Sailing Toward Osiris is not a run of the mill Euro. Yes, you place laborers to collect resources, convert those resources into monuments that you place on the board to score glory points; however, it has several individual mechanics that, when combined, make this game unique.

For one, the design of the way spaces on the board are handled is great. Each space, except for city spaces, is divided into two sections. When a laborer is placed on a space, it can harvest BOTH sections. In addition, the laborer must be placed on a space that is adjacent to the river space the barge is currently in or that had previously been occupied by the barge. The only exception to this is the master laborer, which can be placed on ANY unoccupied space, be it in front of, adjacent to or behind the barge.

As the game progresses and the barge moves down the river, more spaces become available for harvesting, so it must get easier to place your laborers, right? WRONG! When a monument is built, it is placed on one of the two halves of ANY unoccupied space. In addition, there is a bonus glory point awarded for building a monument on a space that is adjacent to barge’s current river space. The decision of should I place a laborer to collect resources vs. should I plan and build a monument is one of the most fun and difficult decisions that need to be made throughout the game.

I also enjoyed the Boon cards. I LOVE the design decision that each player has the exact same set of cards and that, once a card is played (and you can only play one card each round), no other player can play that same card during that round. It adds another decision point of balancing when to play the boon card to best utilize its bonus versus waiting TOO long and an opponent playing the card you wanted to play, thus blocking you.

Finally, depending on your groups gaming dynamics, the game encourages interacting in ways outside of just blocking/denying resources on the board. The city card mechanic (draw two, keep the one you want and give the other to an opponent) forces negotiation and bribing. But the game goes farther than that, and allows all players to haggle about ANYTHING at any point in the game, including after they have passed.

Note: as player counts decrease, spaces are filled with unused player monuments to maintain the tight feel that is present in higher player counts.

I enjoyed playing Sailing Toward Osiris. I love the limited spaces, limited resources, and trying to prioritize which actions to do first. Should I harvest? Should I play a boon card? Should I plan a monument? The game is “only” four rounds long, and provides a lot of decision-making in a game that is completed in less than 90 minutes.

It is also a unique Euro that, with the right group of players, encourages more interaction than most of the other Euros on the market. I believe that Daily Magic Games has another hit on their hands!

If you’d like to become a backer, Sailing to Osiris is now in funding on Kickstarter. Head over to their campaign page for more details. 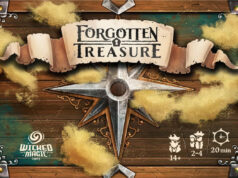