What’s up plebes?! Cthulhu here again. The human Tony has summoned me to review something he can’t force one of his minions to review. He’s been teaching me some human slang as well. Waassssssssup! Have you seen those hilarious commercials? Oh never mind. We got coasters this time.

The humans have informed me that when consuming liquid, humans drinking from glasses use coasters to keep tables from being damaged by temperature or condensation. Apparently they haven’t learned molecular manipulation yet. So, for you insignificant beings out there living in this backwards age called the 21st century, this review is for you. 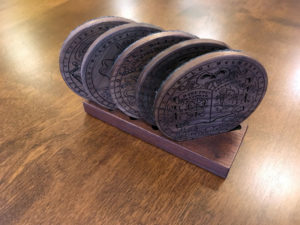 RPG Coasters sent Board Game Quest a set of coasters with a nice wood stand that allows for the display of the coasters on a nearby human-sized shelf. The designs for this batch were of me and various nemeses that have tried to thwart me over the years. Tony says humans also like to roleplay that they are fighting the ancient ones in games of acting. It took me 15 human minutes to stop laughing. Apparently these designs reinforce human memory so they only need to look at the coaster to remember who they are. Sounds about right for humans.

My huge hands had to measure these things. The coasters are approximately 2 5/8″ in diameter and 3/8″ thick including about 1/8″ of circular felt on the bottom. They were made of Black Walnut wood and routed using a CNC router (computer numerical control).

This means the designs are templated in a drafting program and then cut by executing the router’s program on an appropriate piece of wood. The wood grain is very evident on the design so if your human mind can’t grapple with wood grain that interrupts the esthetic of the image, consider your frail existence as a whole.

The most elaborate design is probably the Antiquarian coaster which features an open page of what I assume is the Necronomicon. It’s open to the page that summons Shabbith-Ka. The detail inside the book is nicely done and gives you a general idea of how to complete the ritual. I don’t know, Shabby-K is kinda lame. He’s always swooshing about in purple. He thinks it’s a thing. 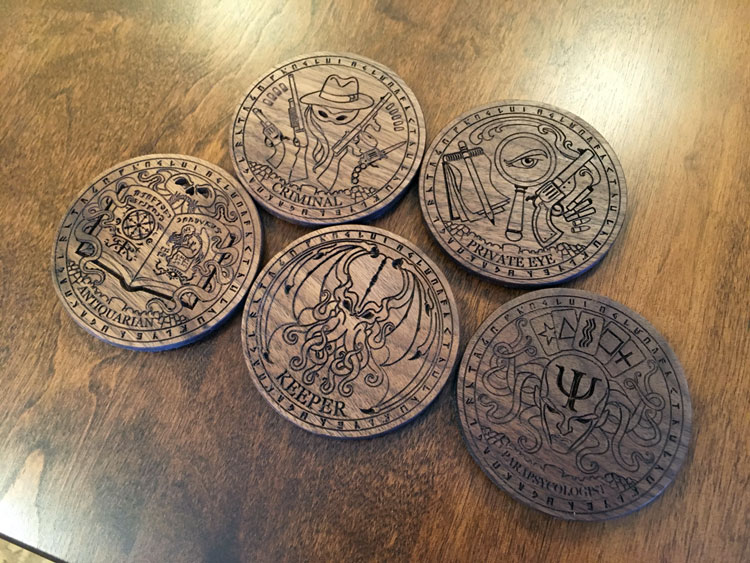 The human Tony said I had to test these coasters with science. I tried to tell him about temporal-molecular-quantragulation, but he said humans hadn’t advanced to that technology yet. So, apparently, testing the coasters involved putting an ice cold drink on the coaster and checking the temperature underneath the wood. There was no noticeable difference from a human comfortable temperature to that underneath the wood. In addition, I placed an ice-cube directly on the coaster and could feel a slight temperature difference under the coaster. The wood used is a solid insulator. 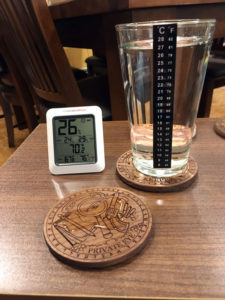 This type of coaster is designed to repel water. Because of this, it is necessary to have a couple of human napkins handy in case you live in a humid climate because the water collects on the coaster’s surface. Here in Arkham in the winter, it’s very dry, so any condensation delivered from an ice cold glass was minimal. I had to resort to more manual testing.

For the record, I did not test with other human liquids such as beer, wine, or any other alcoholic or stain-causing liquid.

For the roleplaying game enthusiast… sorry, another 15 minutes laughing… looking for a water-repellent wood coaster with a variety of designs, RPG Coasters is an observed safe bet. The quality and care in the crafting of these coasters is evident, and the great Cthulhu has no misgivings recommending them. Next time, I wish they would make some with images of sexy planets waiting to be devoured. I’m definitely in the market for those.

Editor’s Note: If the great Cthulhu will allow me to interject, these Cthulhu RPG Coasters are currently in funding on Kickstarter, with a single coaster starting at $10 and a full set for $40. You can head over to the campaign page for more information.