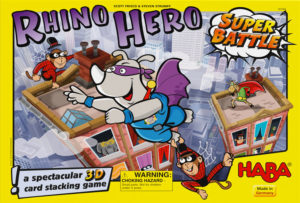 2011’s Rhino Hero is one of, if not my #1, favorite game from family game publisher HABA Games. It garnered a 5 Star review here on BGQ and makes it’s way to our gaming table early and often (with and without kids present). So when I heard they were releasing a sequel, I was all in. I just hoped that they didn’t screw up a brilliant game by bogging it down with too many unnecessary rules. Let’s find out if they did.

Rhino Hero: Super Battle is a dexterity stacking game for 2-4 players that takes about 15 minutes to play. It plays well at all player counts.

The goal in Rhino Hero: Super Battle is to get your hero to the highest level of the communal tower.

Each turn, you choose a floor card from your hand that determines which and how many wall cards you will use (short or tall) to support the floor card. The walls are placed on the tower (either on the base level or on previously played floors) with the floor on top of them. If the floor shows a monkey, you have to hang a spider monkey from the floor card.

Then you roll the movement die and move your hero up or down the amount of floors shown on the die (-1 to 3). If you reach a level that already has another player, you battle by rolling opposing dice. The loser goes down a floor.

Whoever has their hero on the highest level of the tower gets to claim the Super Hero Medallion. When the tower falls, the player currently holding the medallion wins, unless the medallion holder player causes the fall, then every other player wins.

One of the things that made 2011’s Rhino Hero so addictive was the pure joy that came from building the tower. Heck, we even tossed the rule book and just built up the tower until someone made it fall. It was simple, fun, and always involved repeated plays. So I was a bit apprehensive that HABA was screwing up my Rhino Hero experience with their “new rules”. Even as I explained the game to my wife, she seemed unsure of how complicated it had become.

But as had become the norm with games from HABA, I’m man enough to admit when I’m wrong (see Dragon Tower). Yes, Rhino Hero: Super Battle adds some new rules, but they do not hamper or slow down the game in the slightest. Everything still flows smoothly and I actually love a lot of new things in this version.

In fact, what Rhino Hero: Super Battle does really right is increase the depth and variety of the game play. This comes from two simple additions. The first is that the walls now have two sizes, some of which are on the same floor card. This adds some interesting decision-making when you are choosing which floor to play. Do you go for stability, or should you choose the opposite route, hoping to make things harder for your opponents?

Between the different walls and 3 base level of floors, Rhino Hero: Super Battle now allows for a more complex building. I love that it’s not just one tower straight up. Floors will stick off in all directions as one floor my be supported by two different ones. Again, this taps into that great feeling of creating something and Rhino Hero: Super Battle takes it to the next level over its predecessor.

And then there are those stupid spider monkeys. The four included have to be dangled from a placed floor when required. You wouldn’t think that something so small and light could cause the tower to fall, but I’ve seen it happen. As you get higher up, things start balancing very precariously. And then that jerk monkey will swoop in and upset your perfect balance, causing a collapse… and I love it. This tiny little addition adds not only some great challenge to the game, but another area for strategy. I’ll sometimes place the monkeys right in tight areas, hoping my opponents will be the one that has to figure out how to get it out.

Finally, I do have to say that the battling in Super Battle is a tad lackluster. It’s opposed roll offs (with uneven dice) is fine. It’s not very exciting, but frankly, it happens quick and it doesn’t bog down the game, so I can roll with it. It’s a minor nitpick in an otherwise stellar game.

HABA Games had their work cut out for them in trying to improve upon the crossover hit that was Rhino Hero… and they completely succeeded. Rhino Hero: Super Battle is incredibly fun, easy to learn, and definitely is not just for kids. Sure, you can play this one with your little ones, and then once you shove them off to bed, play again without them.

I will say that the box is a tad generous with the age 5 rating. That’s probably a little early, although you know your kids better than anyone. We tried it with a 6-year-old and he was able to play, but still required a bit of help from us.

For those of you that skipped to the bottom, the short answer is, yes, Rhino Hero: Super Battle is awesome. Go buy it, stack things, fight it out to be the top dog, and watch it all collapse. Then play it again right away.

Final Score: 5 Stars – Takes everything we love about the original Rhino Hero and adds in more variety and excitement.

Hits:
• Much lager buildings
• Spider monkeys add a lot of fun
• Can be combined with the original for more players
• Will be enjoyed by kids and adults

Misses:
• Battling is a little lackluster