We review Ramen Fury, a set collection and take that style game based around a very popular food. In Ramen Fury, players are trying to earn the most points by creating bowls of delicious ramen. 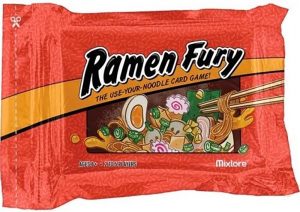 Like many, Momofuko Ando‘s star creation was a major part of my college diet. Sometimes movie night kicked off with a kettle heating party, from which everyone could prepare their bowl before finding a spot in common room to watch our latest Blockbuster rental. As an adult, it remains a part of our regular dinner rotation, but with tasty additions like diakon, fish cake, and mustard greens.

If you haven’t guessed, I’m singing the virtues of instant ramen, and Ramen Fury celebrates this tasty meal in a bag with a colorful game of ingredient collection and ramen consumption.

Ramen Fury is a set collection and take that game for two to five players that takes about 20 mins to play. Its best with 4 or 5.

Each player starts with three bowls of noodles and two spoon tokens. The object is to construct the tastiest (highest scoring) bowls of ramen and finish the meal before your opponents.

A tableau of cards (the pantry) resides in the center of the table. On your turn you can add ingredients (cards) to your bowl from your hand, draw new ingredients, restock the pantry, eat a bowl, or use a spoon to steal an ingredient from an opponent.

Each bowl must contain a flavor packet of some type and up to four other ingredients. The ingredients are scored based on the type flavoring you use. For example, bowls with shrimp flavoring are worth four points for every pair of vegetable and protein ingredients.

The game ends when one person has consumed all of their bowls. Flip your cards, and add up the value of each bowl based on its flavor modifier. Highest total wins!

It’s packaged like a bag of noodles. I’m not even kidding – when you see it on the shelf of your FLGS you’ll think someone left their lunch behind. Once you slit the bag (resealable!) and pull out the tuck box you’re in for a second treat – its printed like a block of the iconic noodles!

The gameplay is quick, lively, and VERY easy to pick up. Once you’ve played a couple rounds, everyone will be slapping cards down, stealing ingredients, and slurping down bowls of ramen quite quickly. There’s a minute amount of language dependency as most of the scoring info is plain via numbers and icons for veg and meat.

Some flavor conditions required all veg, some all protein, and some a mix of both. Unfortunately I thought the thing that was missing most was card variety. In higher player count games, getting the 4 types of ingredient for an “all unique” condition was almost impossible, and at lower counts it was very easy to wind up with a hand full of only one or two things.

There’s a special card, a chili, which can be used to bog down someone’s bowl with a negative (as well as taking up one of the four ingredient spots.) It can also be used to fuel another score, being the main ingredient for fury ramen. This wound up unbalanced in most of the games I played – folks would avoid taking the chili to give to someone else and the player who got a fury flavor packet could load up on them easily. I think this might play out better as purely a negative. Using the spoons for swiping ingredients creates another layer of competition, and if you’re playing with youngsters you could easily remove them or assign them a different value.

The rulebook mentions only using five ingredients and also says there must be a single flavoring packet which is considered an ingredient. I’m not sure counting the flavor packet this way makes sense – you have to have one in order to score, and you can’t have more than one. It might make more sense to instead say there must be one flavor packet and up to 4 ingredients in your bowl.

The red/green/yellow color choices don’t quite work for everyone, particularly since they’re the same value. There is a pattern behind the ingredients based on the color but it could be a hair darker. That being said, assigning colors to types of cards helps players identify what someone is collecting from across the table could be helpful to some.

Ramen Fury has super cute packaging for a fun if somewhat predictable set collection game. There’s nothing groundbreaking here, but the theme and style certainly dresses up the mechanic for foodies and Japanophiles. Ramen Fury is easy to pick up and quick to play, it may kick off an evening of tougher games or make a nice palate cleanser mid game-night.

Hits:
• Did I mention it looks just like a package of ramen?
• Fast to learn, quick to play
• Variable scoring reminiscent of Sushi Go

Misses:
• Nothing really new here
• Spoon tokens may make the bag some what difficult to stack on your shelf