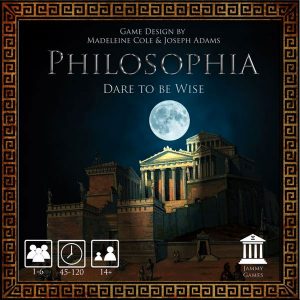 The philosophers of ancient Greece did far more than simply contemplate the meaning of life. They were scientists, ethicists, mathematicians, writers, and naturalists. As I tend to refer to them to my own students, “a bunch of old men wearing togas and arguing down at the forum.”

In Philosophia, players take on the role of one of the iconic thought leaders of the time, working to spread their teachings and become the greatest philosopher of the age.

The first decision a player makes on their turn is where to move their philosopher. Most of the spaces on the Philosophia game board represent city-states that are ripe for philosophical enlightenment, which can also provide bonus resources for visiting. These standard city-state spaces provide players with the opportunity to engage in a standard list of actions, while Delphi and other oracles provide more options for players on their turn. Moving to the Acropolis provides players with a narrow list of specialized actions that can be taken. The key to movement is that no philosopher may stay in the space they occupy at the start of their turn; they must keep moving to hasten the spread of their teachings.

After movement, action selection becomes the name of the game, with 13 possible actions available to players depending on their location on the game board. The list of standard actions that can be taken at any city-state are:

Some city-states have temples, which allow players to exchange money for study tokens which can then be exchanged (using another action) to unlock Wisdom cards, which are needed to satisfy victory conditions and provide a bonus to earning money. Oracle sites allow players to look through an Oracle deck to pick a card that provides cards with such strong, game-altering powers that players may only select one per Oracle deck (to a maximum of three).

The Acropolis is a set of four locations on the board where very specific actions can be taken. Only here can the timeline be progressed, moving the game one step closer to ending. Offerings to Athena can be bid on, providing players with the opportunity for powerful rewards. It is here that debate cards can be collected, with players able to select two sophistry or one syllogism card to be used in public debates. The last action that can be selected is engaging a player in a public debate, which is a game-within-a-game where players alternate playing their debate cards, attempting to play a trump card representing irrefutable logic, and emerging from the debate victorious.

In order to win Philosophia, players need to reach three possible victory conditions, and the timeline needs to be advanced to the end, representing the sunsetting of ancient Greece and the dawn of the Roman Empire. Victory conditions include placing all follower cubes, building all schools, winning three public debates, unlocking all Wisdom Cards, or collecting location tokens from city-states. In addition, each player has a mission card that allows players to substitute a hidden set of criteria to replace any and all (depending on the mission) of the victory conditions.  At the end of the game, if more than one player has met three victory conditions, they engage in one final public debate to determine who is the greatest philosopher of the age.

Philosophia bills itself as a “sandbox” game where players have a wide array of options to pursue victory conditions based on their own preferences and strategy, and it does not fail to deliver in this regard. With six possible victory conditions available for players to get after, and a range of possible actions available to players on their turn, Philosophia gives players the flexibility and freedom to chart their own path and play their own game. Granted, conflict may ensue if players are trying to deploy all of their follower cubes at the same time, but that is where the fun of strategizing moves and picking the best spots and timing comes out during gameplay.

While seemingly complex in rules, Philosophia makes explaining the game to new players and getting the game up and running very easy. Setup can be a bear, as with all games with this level of complexity of components and rules, but gameplay is quick, easy, and engaging. With three different conditions needed to claim victory, there is plenty of strategic planning and evaluating yours and your opponents moves to keep even the most thoughtful and analysis-prone player happy. The various games-within-games of spreading your followers (a taste of area control) and the public debates (half rock-paper-scissors / half take-that) are familiar mechanics that can both new and experienced gamers can grasp quickly.

We found our plays with three players (and up) most satisfying, with enough player interaction to feel like we were struggling against our competitors. While playing with two players (our preferred and usual player count) was enjoyable, Philosophia falls prey to the simple fact that two players can play their own game and have barely any interaction or competition for resources, simply due to the “sandbox” environment the game sets up. While not a specific weakness of the game, it needs to be noted for anyone considering picking it up.

If you are looking for a game positively dripping with them, Philosophia definitely delivers, dropping you right into the world of ancient Greece and making you feel like you are out there in the cities, spreading your philosophies and tenets to the masses. The exposition and flavor text on the components, cards, and in the rulebook only add to the experience. Our personal favorites are the logical fallacies and propositional logic located on the sophistry and syllogism cards, which added to the experience of the public debates between players. Also, the tiny busts of the philosophers as player tokens could be our favorite set of board game bits of the year.

Philosophia gives players looking for an engaging sandbox-style title everything they are looking for—simple yet strategic decision making, lots of planning and forethought, and an innovative and engaging theme. Between the theme and the gameplay, we expect that this is a title that should be successful in its funding and production.

Philosophia launches on Kickstarter today, if you’d like to get a copy of the game, head over to the campaign page for more information.