When we’re kids, there is something magical about the freedom we have. Responsibility robs us of innocence. At times, to really enjoy a hobby such as board gaming, it is necessary to recapture that innocence. A space and time where there is only the game’s environment and your reflections on strategy make the moment wonderful. Unlike a journey to a big convention, a mini retreat for gaming with friends can reproduce that magic.

I was recently fortunate enough to organize such an event. A few friends of mine journeyed to a literal cabin in the woods for a weekend of gaming. If you’d like to know how to make something like this work for your group, learn from my experience as I recall some of the decision points over the course of the event. 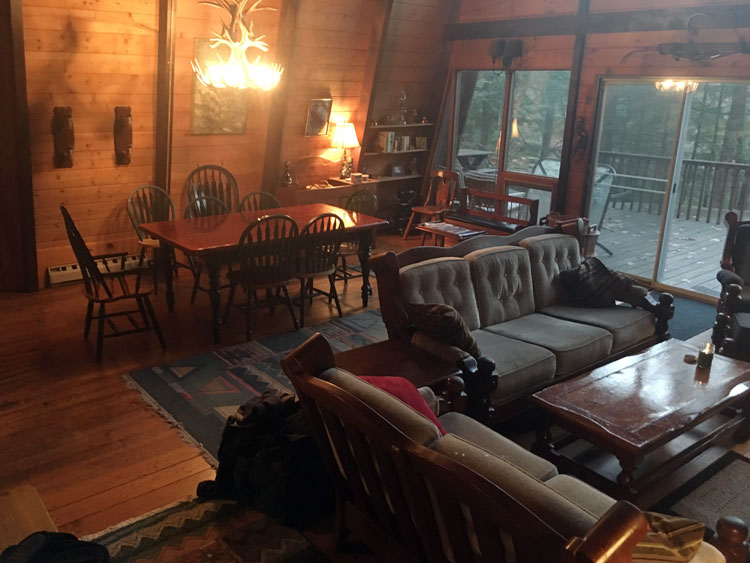 The very first thing to organize are the attendees. My closest friend and I were sure to invite people we know closely and who have personalities that click with our own. If you don’t take this into account, you’re likely to have clashes, and that’s going to be an issue for the whole weekend.

The next thing to settle on is the place. Once you have input from all attendees, the best course is to appoint a subcommittee, with as few people as possible, to do the search for the space. We used AirBnB. This choice made it economical and gave us access to a lot of things a hotel or small convention hall would not have offered. The downside is that you’re treated as a tenant, not necessarily a guest. Depending on what you choose, it’s likely someone’s house, so you need to be respectful of the space.

We narrowed it down by accommodation type, number of sleeping areas, whether it had a good gaming table and cost. Some places are great, but they might include ancillary costs such as high cleaning fees. Other places offer just the right location, but the feel of the space may be off. Examining pictures and questioning the hosts is key.

You also want to be sure the location is a reasonable drive for everyone. If your event is meant to be a retreat, make sure the drive is two hours or less so that people can have the maximum time to game and won’t be put off by the long drive should they need to go home for an emergency. Usually, this is also a good enough drive distance to get away from it all. 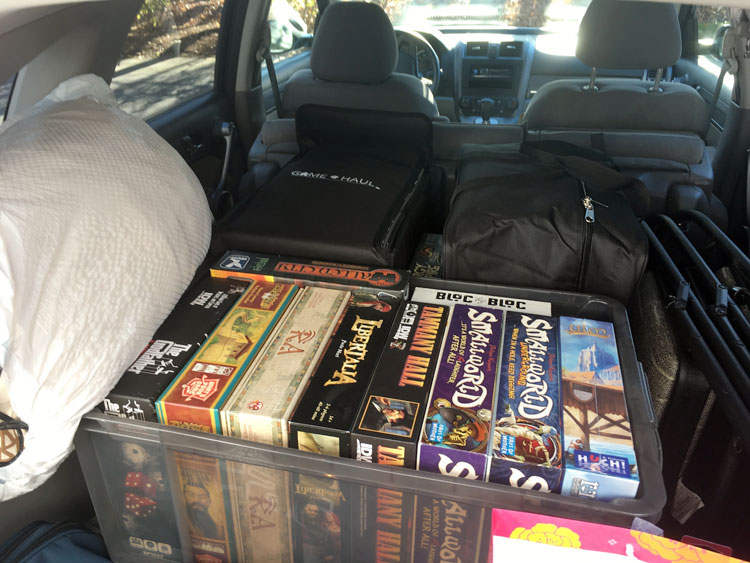 As you pack games for the weekend, the next big decision comes up. How many people are coming? How long is each game? What kind of game variety should be brought?

For our group, it was agreed that we wouldn’t bring any long-play games. These would be games longer than two hours generally. For your group, make sure that everyone understands what games will be played before they commit. No one wants to spend a long time waiting for another game to finish and then feel they didn’t get their money’s worth.

As you pick, also be sure to choose a variety that matches the tone for the group. Our group as a whole loves non-wargame area control, some backstabbing and high player interaction (which usually comes with area control). Depending on the group, you should also offer that anyone can bring a game that the group will commit to play, with some exceptions depending on how enjoyable it is. If you’re likely to have a mutiny because of someone’s pick, be diplomatic. It’s better to choose a less disruptive option and make sure everyone has some fun than promise a title is going to hit the table when only one person likes it.

The other decision is which games fit the number of players with an eye for the perfect number of players for each game. Cyclades is playable at 2, but for real magic, 5 players are necessary. The best number of attendees to have for events like this is 5 – 8 in my opinion. This gives the option for the group to split and play separate games and allows for a variety of games where optimal player count is the max or min. Caverna is good with more players, but best with fewer. Star Wars: Rebellion works best with 2 or 4, but also takes a long time.

Making these game decisions up front will save you hurt feelings and passive aggression during the weekend.

I arrived early to the cabin and checked e-mail (you should always be sure you have WiFi) while waiting for others to show up. Another attendee came a couple of hours later, which gave me time to get familiar with the space and grab some groceries from a nearby store.

The bulk of our group was arriving later so the smaller 2 player games I brought (Mr. Jack Pocket, Tides of Madness, Game of Thrones: Hand of the King) worked really well. We relaxed and got into the zone of gaming with low pressure stakes.

As everyone else arrived, our first big game was Adrenaline. I had been desperate to get a 5 player game of this in, and it did not disappoint at all. Everyone enjoyed it, and the tone was set for a lot of game aggression to come.

The next game, Race for the Galaxy, was a more calm affair. It was a good follow-up choice since we had a couple of players with mild experience, two more with extensive experience and the last with no experience. Playing with that variety and a very vocal discussion of strategies allows player to still feel involved even if they’re not likely to win with a game that depends heavily on experience. The mild experience players, myself included, also are able to reaffirm their knowledge with such a deep strategy game.

It was a gorgeous crisp morning. I picked up donuts from a local donut shop, which were much better than the kind from your local pink and brown establishment. I set up a game while others were waking up.

The game I chose was Bloc by Bloc: The Insurrection Game. I participated in the Kickstarter funding and finally managed to get a moment to sit down and learn the rules. Choosing a cooperative game with some learning to be done was good for the morning. It was low pressure, and I made it clear I was mainly interested in experiencing the game mechanisms, rather than committing to a full game. 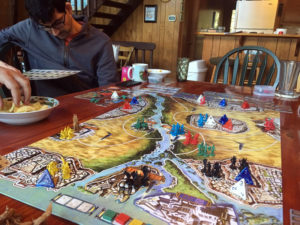 The big late morning game was Kemet. All the players had acquired caffeine and sugar and were ready for a real throw-down. This was possibly the best game of Kemet I have ever played. The scores were amazingly close, and it was anyone’s game up until the final round. Kemet also invites loads of smack-talk, which is always fun.

One of our group had to bow out to cook food, so the next game managed to be a 4 player. Tyrants of the Underdark once again retains the title of my favorite deck building game. The strategies in purchasing cards or manipulating board control always energize me.

Since two of my favorite games had been played, I was happy to take a back seat while Titan was offered. It was openly described as a game which some people don’t like because it’s style takes some getting used to, and it has player elimination. This is something which I wouldn’t recommend in a game retreat game, but it was this gamer’s favorite, so we went with it.

Titan is not my cup of tea, and I ended up getting eliminated early. All in all, it allowed me downtime to get some food.

Another player had to have some downtime, so we were back to another 4 player area control game. This time it was The Godfather: A New Don. The more I bring this game out, the more I like it. I reviewed the game, but sometimes, I feel I haven’t done it justice. Whether people seem to take it seriously depends immensely on the group. This game was eliciting the biggest analysis paralysis of the entire weekend, a testament to the deep design of a seemingly light game.

The final game was a special thematic request. I felt it only proper that we play some kind of murder, betrayal, mystery game. Betrayal at House on the Hill hit the table. I had heard about this game many times over the years, but had never played. When the haunt appeared, low and behold, my friend who is notorious for betraying and backstabbing was the traitor. But no sooner was he identified, than he was dispatched with a well placed blessing and revolver. It was a quick and bloody lopsided victory. This really illustrated the potential weakness of the game, but the ability to construct that story arc quickly and make a memorable experience is what made the moment lasting.

At that point, I was ready for bed. My friends stayed up to play a game of Clank!. I’ve had great experience with that game and wasn’t jealous I was missing out. 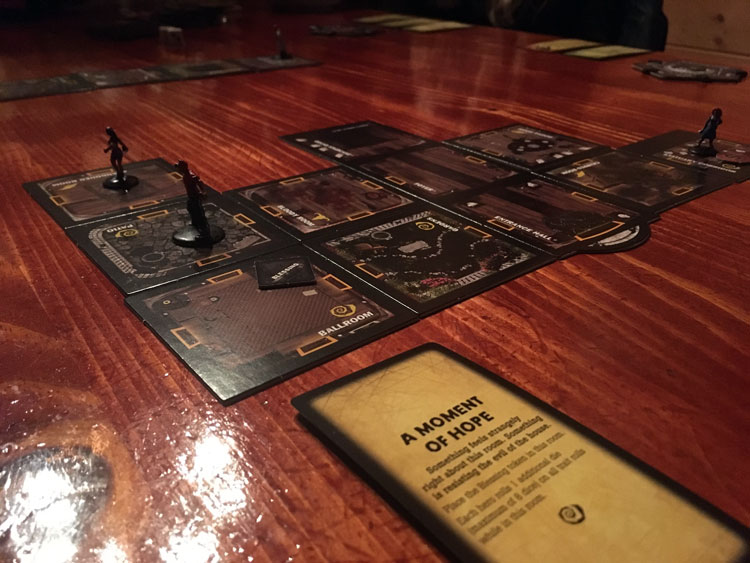 The final morning revealed two inches of snow on the ground. Because it was the first of the year and also because it was a heavy, wet snow, a few branches fell overnight and throughout the morning. With worries about getting home and family commitments, one player left early.

For the rest of us, a lighter-on-rules strategy game won hearts. Barony is one of the most underrated games I have. Players enjoy it the same way they might enjoy an advanced game of checkers, but the strategy and quick play time make it a fabulous area control game. The more people who join in a game, (at least more than 2) the more it shines.

With the number of falling branches, we realized we needed to leave earlier than expected due to the snow. Our initial route back to the highway was foiled by a downed tree and power line. Thanks to the magic of GPS, we made it out with memories and experience galore. 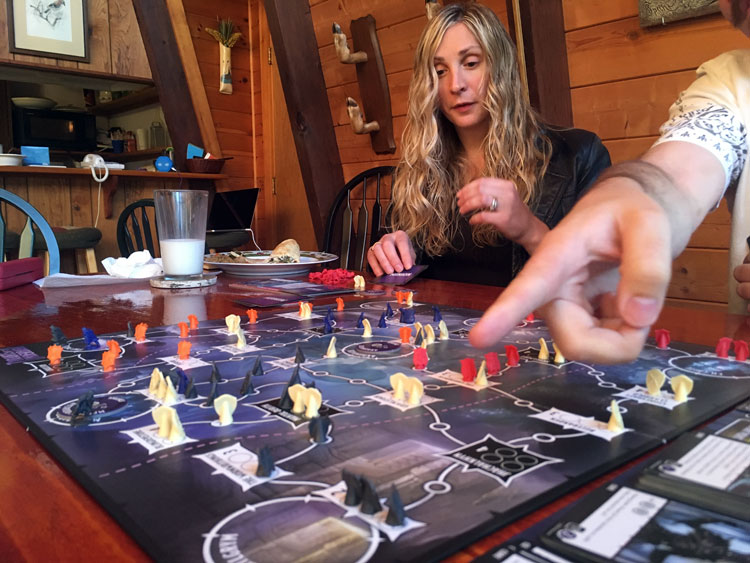 I highly recommend this experience for every gamer. If you can manage a group of couples, close friends, or just want a small group with a change of scenery, it’s well worth the time and money. The time invested up front to organize the event will pay off huge dividends in memorable experiences. 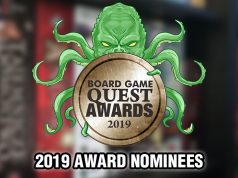