We review the light area control game The Godfather: A New Don from IDW Games. In this mafia-themed game, players are competing to tack control of New York during the rise of the mafia. 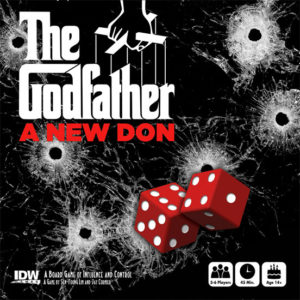 Dice rolling and action selection games have plenty of notable games. Yspahan, Alien Frontiers, Castles of Burgundy, and The Voyages of Marco Polo come to mind instantly. There are also a myriad of games that use dice in combination with area control to let players contest a region, but not many games have players making sets with dice to implement area control.

Although it’s a crowded field for Godfather licensed games right now, IDW Games has presented a game from notable board game designers Jay Cormier and Sen-Foong Lim that does just that.

The Godfather: A New Don is a dice rolling, action selection game for 3 – 6 players that takes about an hour to play. It plays best with four players. Five players work well too if players don’t mind some downtime.

The arena for Godfather: A New Don (hereafter called just The Godfather) is set in the streets of Manhattan and Brooklyn during some fictional time when the mafia was just on the rise and Las Vegas was just getting started.

Players represent the heads of the five (plus one apparently for six players) families from The Godfather movie franchise. The game has players using dice to control neighborhoods that are part of various regions. The player that manages to control the most neighborhoods in each region scores a certain number of points aiming to be the overall point winner at the end.

This light game contains straightforward components. Players receive dice, a cardboard screen and gangster (aka “soldier” meeples). Everything is of good quality besides the frequent miscut on some meeples.

The color choice for the components may distract some. The overall palette of colors are muted with a shift towards grey. This is fine for brightly lit environments and works well with the gangster theme, but sometimes two colors may seem similar in lower light.

This color choice and graphic design misstep also extends to the main board. The design aesthetic overall is fine, but the regions and neighborhood coloring is confusing. The individual areas controlled are designated by a strong black line border and inner color, but the overall region, being a collection of neighborhoods which scores at the end, is vaguely visible.

The regions are more identifiable by the dice symbols in the middle of each neighborhood. It’s tolerable for those with keen eyes who can get a sense of where each region begins and ends, but overall, it’s a poor choice. Because player pieces also compete with board colors, players will have some difficulty seeing how the scoring opportunities will play out for region control in the end game.

Your journey in the mafia begins with a random determination for which player takes the role of the Godfather. Afterwards, every player puts a soldier meeple on the “0” space of the Muscle Track with the Godfather player placing their meeple on space 3 of the track. Non-Godfather players also place a meeple on the highest numbered space for favors. The Muscle Track is used to determine which player has higher force when neighborhoods are contested. The Favor spaces are used by players other than the Godfather to perform dice or meeple manipulation abilities. These will aid players in getting good dice combinations or position on the main board.

The Favor spaces come into play in the next part of the game. Once again, beginning with the Godfather player, players use their dice to take actions on the main board to take control of neighborhoods, increase their position on the Muscle Track, or go to Vegas for a chance to get additional dice in the next round. Neighborhoods require a set of dice be spent to have a soldier meeple take control. A player can form a set by selecting dice from those they have to form pairs, triplets, quadruplets or quintuplets. They can also form a set by creating a run of numbers such as 2,3,4. Players other than the Godfather player can also use favors to modify dice to make this happen.

The neighborhoods on the board are grouped in regions that match the dice symbols. The overall control of a region is given to the player with the most controlled neighborhoods in a region.

If a player forms a set and all the neighborhoods that match that set are occupied, they may force out another player if the invading player has a higher position on the Muscle Track than the occupying player. In this way, players may contest neighborhoods to have the most control over a region. This is the only way a player may take control of a neighborhood/region from another player.

Committing dice to the Vegas spaces is accomplished by spending any die from a player’s pool and placing a soldier meeple on a space next to a die face. From the second round on, the Godfather player begins the round by rolling three Vegas dice. Any dice rolled that match the numbers where players have placed soldiers are awarded to those players as additional dice to be used that round.

The end of the game occurs once a single region is fully occupied or one player has placed all their soldier meeples on the board. Once the game end condition is met, players finish the round and final scores are calculated. Players score points for controlling the most neighborhoods in a region or having the most soldier tokens remaining in their supply. Most points wins the game and scores are generally in the 11 to 30 range depending on the number of players.

The Godfather is a game about area control, but it also demands that a player work to control something else. At it’s heart, the game asks players to manipulate arbitrary random numbers to take control of the board in just the right ways to score more than their opponents. If there is an overarching theme to the criticism, it is this: along with the puzzly fun of managing numbers, the design brings unnecessary frustrations into scope that keep it from being a great game.

Besides the coloring of components previously mentioned, the game is not straightforward. It’s not difficult to teach, but for such a light game, it’s amazing that it takes as long as it does for the rules and strategy to sink in. A first game moves so quick that players just have time enough to commit the mechanics to memory and comprehend the flow of the game.

There are significant small rules and exceptions to primary rules, such as the difference between how the Godfather player takes actions compared to other players. These make for a constant shift of focus on action options as players decide whether or not to take the role of Godfather. The mental challenges of this concept demand a second play to understand the nuances of strategy. There are lots of different ways to control the game, some more obvious than others. It’s a testament to the skill of the designers that they’ve managed to squeeze so much game into such a short playing time.

Another positive and negative is how the game approaches area control interaction. Most area control games provide a means for players to compete with each other for territory. Losing control of an area, only to take it back later, is common. In The Godfather, the end game condition of a region being completely filled means that the regions function more like progress tracks in two-dimensional form.

In addition, there is only one way for units on the board to move to other neighborhoods (through a Favor). This again pushes the area control aspect to have a different flavor that might not be expected. All of this does not mean the experience is a negative one. Once players grasp the concept of how the area control works, it will either get enjoyably under their skin or turn them off.

Where players will get engaged with the creation and manipulation of dice combos to achieve objectives. Often it involves examining the board to decide what the most optimum move is and figuring out a way to make a dice roll meet those objectives, through favors or becoming the Godfather. If opponents can figure out what a player is after, they have some means to thwart plans, but more often than not, the foiling of an opponent’s strategy involves getting more muscle than they have to boot them out of a neighborhood.

The most engaging play of The Godfather occurs near the end of the game, as players size up the game state looking for the most profitable moves. The resolution of a game feels like a plain numbers tabulation, but the final moves driving to that moment are filled with tension. More than anything else, players who love manipulating number collections and judging comparative positions will find a hidden gem here.

Jay Cormier and Sen-Foong Lim are quite a dynamic duo. Consistently working together, their ludographies span several unique titles that prove they know how to design a wide variety of play experiences. Although The Godfather: A New Don takes no thematic content for play other than New York City and family names on player screens, this departure yields a product that stands out in the realm of lighter games. The unexpected subtle choices made in the design (both visual and gameplay) create frustrations to deal with. These can be mitigated, but they keep the overall whole from being superb.

The Godfather: A New Don makes an offer you won’t expect. This is a game that slips under the radar. It doesn’t pretend to be a heavy game, but the strategic choices inherent in the mechanics are impressive. Fans of dice and making combos should sit down immediately to see this for themselves. Area control enthusiasts could get frustrated with the nuances of play through the dice mechanics. And, finally, all players will need to come to grips with the visual design in The Godfather: A New Don to successfully evaluate ways to win.

Final Score: 3.5 Stars – Lots of fun for a quick fix of area control and dice rolling, despite graphic design and rules idiosyncrasies.