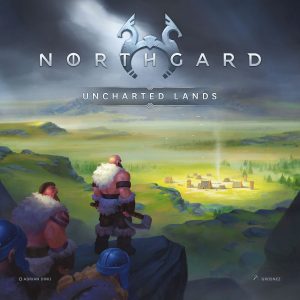 In the early 1990s, real-time strategy PC games started to blossom. Computing power had increased to the point that constant interaction with opposing networked players was possible. Time and attention became variables in PC games instead of merely relying on randomized elements to determine the outcome.

It’s highly ironic then that games which are a hit for the PC platform because of these human limitations would then be redeveloped for the turn-based arena to offer players a new challenge. The game in question here is Northgard. The PC game is a highly rated opus of Norse civ-building that tasks players with achieving goals of expansion while fending off enemy player tribes. The tabletop, turn-based version is very similar, but, as predicted above, there are some modifications necessary to make up for the real-time frenetic pace that’s normally offered.

Northgard: Uncharted Lands is a Norse civ-building, deck-building, exploration and tactical combat game for 2-5 players that takes approximately 30 minutes per player. For a great experience, players will want to have 3 or 4 players. Two players are fine, but like with many area control games, a third and fourth player offer a multi-layered experience.

The flow of play in Northgard is structured similarly to other civilization games. It’s structured as a series of game years/rounds during which players will take individual actions through a number of phases. In the latter phases of a round, resources will be harvested from areas controlled and then upkeep costs paid as winter sets in. Northgard has both an immediate end condition which promotes a king-of-the-hill immediacy and a 7 round game limit, at which time a winner is declared by totaling up in-game and end-game points.

Because Northgard is a deck-building game, players will have the opportunity to gain cards and trash (remove from the game) cards in their deck. Unlike other deck builders, Northgard is a slower game similar to the plodding pace of A Few Acres of Snow. This feels different from the frenetic pace of the PC game, but alternating actions in this way more accurately imitate the real-time play from the digital experience.

During the main action phase of the round, players can do the following

After the main action phase, players harvest resources from territories they control (including points for certain territories and buildings controlled) and pay costs for the Winter phase with Food resources. This is important because if a player cannot pay, they receive unrest cards that do nothing but clog a player’s deck.

The final step in the round is to check to see if someone controls 3 territories with Large buildings. This requires that the territories be closed similar to the way castles must be completed in Carcassonne (no open-ended pieces of the territory remaining). If no one achieves this by the end of 7 rounds, the winner is decided by points collected and bonus points for extra resources and malus points for unrest cards.

Having played the PC game and the tabletop experience, this previewer is happy to report that the experiences are different but complement each other in a memorable way. This is not a gritty skirmish style game. It feels very much like a hybrid of deck building, civ-building, and tile-laying games. Here, the deck upgrades are slow in their overall effects on the game, and selecting the right cards is crucial since they won’t be played very often.

The other notable difference from deck builders, in general, is the time scale. The exploration mechanism and alternating turns make this feel like an experience that develops with each tactical choice. It’s hard to implement an overall strategy without any adaptations. Players who enjoy games where a flexible strategy is necessary will definitely find what they’re looking for here, and that is something very similar to many real-time strategy games where reactions to opponent decisions are critical.

Even though the components used for this look are basic preview-quality, they were still nicely done. If the campaign can offer distinct meeples or miniatures for the clan units and warchief, along with interesting creature miniatures or meeples, this could add significant enjoyment to the experience. Overall this is a game that looks and plays like a quick civilization experience with an element of exploration to offer extra depth and variety that is not common to deck builders. This writer is definitely looking forward to seeing what the campaign has to offer.

The Northgard board game isn’t just some money grab to capitalize on the fame and enjoyment of the PC game. This is a solid deck-builder which incorporates exploration and tile laying similar to the fun of Carcassonne. That is not an easy design to get right. Based on this writer’s experience with the game, the Kickstarter should be something that’s worth backing for any fans of games that engage casual and experienced gamers.

The theme keeps the tone and feel of the original game and that delivers a refreshing light feel to the overall experience. Fans of the PC game as well as fans of civilization games in general should definitely keep funds set aside for this one.

Northgard: Uncharted Lands is coming to Kickstarter on July 23rd. If this sounds like a game you might enjoy, you can sign up to be notified of the campaign launch here.