We review the Imperial Settlers: Amazons expansion from Portal Games. This new faction for Imperial Settlers gives players a new way to approach the game with their quick foundations and card cycling. 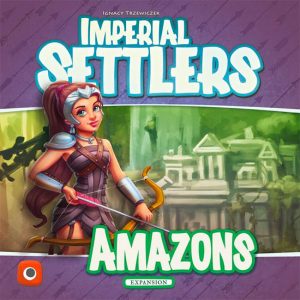 Imperial Settlers from Portal Games has to be one of my favorite card games. It combines engine building with multi-use cards, and I love how different each of the factions feels. The game has already been expanded a number of times with both new factions and smaller card box expansions, but Portal Games isn’t done yet. Their love affair with the letter “A” continues as the Amazons join the Atlanteans and Aztecs as new playable factions. Are the Amazons a worthy addition to this great game? Let’s find out.

Other than a full deck of Amazon cards, the expansion also comes with 10 cards for each of the core factions and 10 common cards. Oddly, there were no cards for the Atlanteans or Aztecs included.

The new rules in the Amazons are fairly minimal. First, they can now earn foundations through their deals. These are taken from the common stack of cards. Also, when a faction card is removed when used as a foundation, instead of being discarded, the card is shuffled back into their deck.

I should also note that Amazons uses rules from all the other expansions, including the small box ones. What I found mildly annoying was the lack of rules for Open Production, Sets, and Conquest. The rulebook had links to the online PDF for those expansions, however having to pause in the middle of the game to look up the rules for conquest by typing in a bit.ly link and trying to read it on my phone was frustrating. I would have MUCH preferred the rulebook having an extra page (heck, the last page is only an ad for the game) that had the relevant rules on it.

One thing that I love about Imperial Settlers expansions is how unique they are. Portal Games isn’t just giving us a “pallet swapped” civilization to use, but they truly to make each one feel unique. The Atlanteans had their gear resource and sinking faction cards, the Aztecs taught us how to pray, and now we have the Amazons.

The Amazons are really good at getting their faction cards out easily and quickly. Just skimming through their deck, I only found one card that cost more than one resource to build. Many require only have a foundation as a cost. And that further synergizes with their play style. The Amazons are the first faction to be able to get free foundations from deals.

Also unique to the Amazons are how their cards play. Many of their cards simply provide a building bonus. For example,  the New Roots card only costs one foundation to build but gives a worker, a gold, and a wood as a building bonus with no other benefit. What that means is once you’ve played the card, there is no reason to keep it around, so you can easily dump it later to be a foundation. Since any faction cards used as a foundation gets shuffled back into your faction deck, you have the opportunity to play it again in the future.

All this together means that you can have a lot of deck manipulation with the Amazons. And once you start getting cards into play and into your discard pile, your deck gets a bit leaner. This gives the game an almost deck building element where you can thin out your deck and quickly cycle cards from play, back to your deck, and back into play.

Finally, the Amazons have a fairly good amount of player interaction in their deck. They not only have open production cards but cards that will have you stealing buildings from your opponents or flat-out discarding cards from their deck.

I enjoyed the Aztecs factions and I thought Atlanteans was just OK (it’s probably my least favorite empire). However, I love the Amazons. Their unique play style is still very easy to pick up and learn, yet they are incredibly fun to play. Between how quickly you can get faction buildings out, to the deck manipulation, Amazons is a flat-out win for Imperial Settlers fans. If you love the game, then this one is a must own. If you haven’t splurged for any faction expansions yet, definitely grab this one first.

Hits:
• Unique play style
• New rules are simple to learn
• Has cards for the core empire and more common cards.
• Great synergy between cards and mechanics

Misses:
• No rules for the other expansions in the rulebook
• No cards for Atlanteans and Aztecs