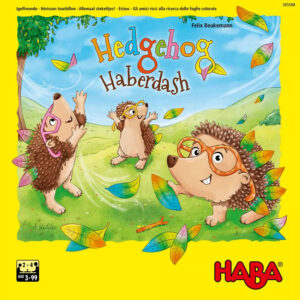 My wife and I have been married for two years now, and it’s inevitable with every conversation we have with family, the topic of children is brought up. It is a guarantee at this point. “When are you two going to have kids?” And the answer is almost always the same: not anytime soon.

So why is it I’m the one reviewing Hedgehog Haberdash, a 2020 release from HABA that’s for ages three and up? Currently, the number of nieces and nephews we have is at five, all under the age of five. Not only that, by the time April arrives, two more will be added to their ranks. So how does one entertain kids? Playing some sort of game with them. Who is the most reliable for kids in that age range? HABA.

The basis for Hedgehog Haberdash is a race: the first player to get seven leaves of their color onto the back of their hedgehog wins. On your turn, you roll the die, which can give you one leaf, two leaves, or cause the wind to blow. If leaves are to be drawn, the active player reaches into the bag and draws them one at a time. If they have your color on one of the ends, then they are added to the back of the hedgehog. If not, you may give it to one of the players that match the two colors.

If the wind blows, then you take one leaf from any of the other hedgehogs. If it’s your color, then you add it to the hedgehog. If not, you give it to the player who has the other color on the leaf. If a player fills their hedgehog, they have the most beautiful costume and is congratulated by everyone!

The day before playing Hedgehog Haberdash with my two nephews (ages 4 and 5), they were having a bit of a challenge when it came to keeping their attention on a game of Trouble. They were a tad impatient on waiting for their turn, always wanting to hit the Pop-O-Matic and having trouble counting the spots they rolled.

But I taught them Hedgehog Haberdash and they picked it up quickly. The rules are straight forward, with every action being linked to a die roll. Much of the game is centered around the luck of the draw from the bag. There is a good amount of memory that can be employed, but it’s not mandatory. And younger kids may not even see the way the memory component can be used, so it gives a slight advantage to adults in that aspect.

However, kids are going to adore the components. Giving the hedgehogs their own glasses that match the bugs, sticks, and flowers on the cardboard, designating the player colors, is such a charming touch. And like all HABA games, the components do a lot to keep the attention of a child. The hedgehogs, made of folded cardboard, stay assembled in the box, meaning getting into the game takes no time at all.

But like I mentioned with the Pop-O-Matic, the kids continually wanted to take off the glasses and play with them. The hedgehogs stay together fairly well, but the glasses do not lock in as you’d hope. I got to the point where we left all the glasses in the box.

I’ll follow suit with Tony’s review of Building Site and refrain from providing a scoring, knowing that the majority of the games from HABA aren’t targeted toward my age range (although Rhino Hero and its sequel Rhino Hero Super Battle are some of my favorite dexterity games, regardless of age).

Hedgehog Haberdash is a solid way to enjoy a short game with kids (10 minutes). It’s not going to overstay its welcome due to solid design work from all releases at HABA. It’s lighthearted, and as your kids get older, they can notice more and more of the memory aspect of the game. And it’s always fun seeing kids draw their own color from the bag and cheer in excitement. 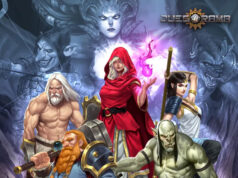