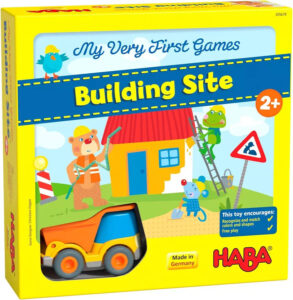 One of my main goals with having kids (I suppose other than raising them right and all that stuff) is to have some more gaming partners in the house. I mean, why try and find more players to show up for game night when you can just make your own. So to that effect, I’ve been greedily waiting for my kids to age up enough to start playing board games with them. As they are just clearing 2.5 years old, I figured there is no time to start like the present. Unfortunately my attempts to teach them Star Wars: Rebellion ended in failure and now I’m thinking I should probably set my sights a tad lower.

This where’s HABA game’s trademark yellow box comes into play. After my discussion with T Caires last year, they mentioned some great new offerings in their toddler line that I figured would be worth testing out on the little monsters. Today, we are going to look at Building Site, part of their “My Very First Games” line of games. This one is aimed at kids ages 2+ and takes about 5-10 minutes to play.

Building Site is a cooperative board game where players must find all the construction materials to build a house. On a player’s turn, they flip over one of the traffic cone tiles hoping it matches one of the two icons that the Foreman Bear needs for the current stage of the house. If it doesn’t match, the tile is turned back over and the next player goes.

If it does match, the player uses the dump truck to drive the tile to the bear. If it was the second item the bear needed, then the player drives over to pick up the relevant wooden piece from the supply site, drives it to the construction site, and adds it to the structure. The bear is then moved to the next stage of its track.

The game ends when all four stages of the house are built. For an added challenge for older players, you can add in the 4 bird tokens. These just serve to make the memory tile pool a bit larger, if a player turns one of these over, the bear just takes a coffee break.

“Play Cement Truck?” “Daddy, play Cement Truck?” That’s all I’ve heard since getting a copy of Building Site. I’m not sure how this game came to be called Cement Truck, but there you have it. They’ve spent a lot of time with this game over the past month or so and it’s easily become their favorite, knocking out other titles such as My First Orchard, Hungry as a Bear, or Nibble Munch Crunch.

Sometimes I play with them and try and make them follow the rules. As they are only 2.5 years old, I’ve had mild success with that. I’ll have them flip over a tile and ask if it matches. If it does, they get excited and drive it to the bear. If it doesn’t they proceed to flip over all the tiles until they find the one that matches. That’s not quite in the rules, but they are having fun so I let it slide. The nice thing is that it’s teaching them pattern/symbol recognition.

But they’ve also learned that the bear has a progression and he has to get his items in order. Their favorite part though is using the dump truck. My son in general is obsessed with trucks, so this is an awesome component for him. However, this leads me to the meltdown factor. My kids are usually fine with not getting a match on the cone tokens, yet when it comes to sharing the truck, there can be fights sometimes. I’ve tried to instill in them that they need to take turns with it, but they aren’t always in the mood. So while this does work as a good lesson in sharing, be prepared for some screams and possibly a flying truck.

When they play on their own, they just kind of do their own thing. My daughter likes to match tiles while my son just likes to drive the truck around. But they are quiet and enjoying themselves so that’s good with me. They are usually good to just mess around with the components for at least half an hour before they start getting destructive.

But that does lead to the question is if Building Site is a game or an activity? As there is no real way to lose the game, it might lean towards an activity. Then again, there are rules and things to do, so who knows. In either case, it probably doesn’t matter. It’s something you can play with your kid and they can even learn something in the process.

Finally, a lot of your mileage will come from how old your kids are. I’m not sure when kids are going to age out of this game, but you know your kids better than anyone. The rules are simple and easy to learn. I’d guess that around 3 years old would be a good spot where they can understand the rules and actually play with purpose. Mine aren’t quite there yet, but they are pretty close. They grasp a few concepts here and there but haven’t put them all together as a whole yet.

Normally we end our reviews with a score, but that doesn’t really feel right for Building Site. It’s a toddler game/activity where your play experience is going to greatly differ depending on the age and skill level of your kid. This game can range from just bits to keep your kids occupied to an actual game with rules and flow.

I will say that my kids love it and it’s been their most requested game to play since we got it. The “toy factor” is pretty through the roof with the actual dump truck. You can feel free to try and teach your kids lessons with this one or just let them play and explore. There’s a lot of great bits here for them to interact with. If you’ve got a toddler currently crashing around the house, Building Site is definitely worth a try.