We review Ettin, a team-based board game published by WizKids Games. In Ettin, players are drafting and then competing with players on other teams for control of cards. 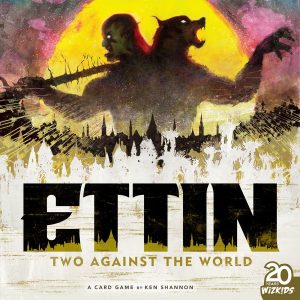 Partnership games aren’t necessarily unheard of in the board game hobby. But generally, they are found in trick-taking games or, more recently, tile-laying games where you and your partner work on a shared area.

Ettin is a partnership game where you and your ally will draft cards and battle against the other team(s). You can play with up to 8 players (or 16 if you have two copies of the game) but the teams are still broken into pairs. The goal, of course, is for you and your ally to assert your dominance and take over the world.

The core of Ettin is quite simple. During setup, you’ll have an ally next to you and your enemy on the other side of you. You’ll have a nation mat with three different locations and each round (ages in game terms) you’ll also be dealt an adventure card that you and your enemy will battle over.

Before the war, however, you’ll draft cards to your war camp. The drafting alternates between peacetime and skirmishes. During a skirmish, you’ll draw four cards from the top of the shared mercenary deck and draft against your enemy. The player with initiative will pick a card first, the other player will take two cards, and leave the final card for the initial players.

Peacetime drafts take place between you and your ally. You’ll each draw the top two cards of your nation deck and choose how to split them with each player taking two cards. All the cards you draft, in peacetime or skirmishes have a cost. You must pay that cost to add them to your war camp or you can discard them and get some gold for doing so.

After three rounds of drafting, you’ll go to war with your enemy. You’ll take turns deploying cards facedown to any of the three locations on your nation mat or the shared adventure card. Once all cards are deployed, you’ll reveal the cards and whoever has the most strength wins the battle. Win a battle and you’ll take some of your enemy’s cards as spoils. Win most of the battles and you’ll earn some extra VPs as well.

There are, of course, a lot of special abilities that come up. You can cause your opponents to run and hide. You can have flying creatures that can’t be taken as spoils. Or defenses that can only be penetrated by certain types of units. Once the battles are resolved, most remaining units go to the retired area, where they will earn you points when the game is over. Some, however, can be reused in subsequent ages.

After the third age, the game ends. Players total their VPs from cards they have bought and received as spoils; along with any VP tokens from winning the battles. Their total is then added to their ally’s VPs and the highest total is the winning team.

I’m not sure where to start, so I’ll start where I actually started… the rulebook. It’s an atrocity. You’ll read it. And re-read it. And your eyes will gloss over with special abilities and words and examples.

Power through. Setup the game in front of you as you read. Or check out one of the YouTube videos that will give you a good visual for what is happening here. Ettin is a little tougher to learn than it should be. But it pays off.

I love the idea of a partnership game where you must split cards between you and your ally. And the rules are very explicit that you can confer with your ally at any time. So even if you are drafting a “skirmish” with your enemy, you can ask your ally to take a look and get their opinion.

Each nation has a unique deck with its own strengths and weaknesses. Each location even has different inherent abilities and defense values. Some are better suited to completing the adventures. Other nations have lots of flying troops that are hard to capture as spoils. They range in difficulty so you can give some of the more straightforward nations to newer players and as you become more experienced you can give the more difficult options a try.

There is a lot more going on in Ettin that the rules may suggest. Sure, you want to win most of the battles if you can. But maybe your opponent has an extremely powerful defense that you want to defeat and take as a spoil, so you focus your strength there to try to capture it. Or maybe the adventure this round provides a lucrative bonus so you want to take it on, even if that means losing strength elsewhere. There are a lot of decisions to make with every placement, but you are always working with imperfect information since your opponent’s cards are facedown.

Some cards have a scouting ability which allows you to turn all units at one location face up. You may find dragons in the common deck that can be deployed and provides significant strength and victory points. However, the world of Ettin includes dragonslayers that may defeat you very expensive dragon and will move those victory points over to your opponent. There is nuance and layers here that you’ll have to play multiple times to really grasp.

The fact that the game can support 8 players out of the box, or 16 with a second copy really puts it amongst rare company. Most higher player count games fall into social deduction type of categories. But Ettin is really just a bunch of individual 3 player interactions. You interact with your enemy and your ally—that’s it. So, you can, in theory, expand the game to, say, 40 players, and not really increase the playtime significantly. However, you really need at least four players to get the Ettin experience and odd numbers of players will mean you have to use a bit of wonky variant rules.

Ettin fills a hole in my—and I believe most board gamer’s—collection. It’s an enjoyable and strategic game that supports more players than you can possibly hope to throw at it. Even if you aren’t interacting with everyone at the table, you never feel like you are waiting too long as most actions are happening simultaneously.

Each nation provides a slightly different experience and it’s great to be able to work with a teammate to try to develop a plan and get some help when you need it. The variety of troops’ abilities make the drafting interesting and the battle resolution is really quick and gets everyone back into the fun of drafting and playing your units. Definitely recommend giving Ettin a try if you have a reasonably sized group.

Final Score: 4 Stars — A partnership war game with asymmetric nations, lots of variety, and expandable to dozens of players.

Hits:
• Partnership game with two different types of drafting.
• Each card has a ton to consider—its strength, cost, and abilities.
• Plays in roughly the same time even with large player counts.

Misses:
• Really needs at least 4 players, and only even numbers.
• Rulebook is a mess.