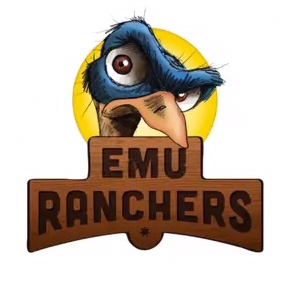 Life can be hard for the Emu Rancher. These birds cost a bit of money to get settled in and then once they do, they can be quite ornery. Even with all these challenges, there is still a high demand for Emus and the people that care for them. At least that’s the theme of the game Emu Ranchers, now in funding on Kickstarter. Can you run the most profitable Emu farm? Lets find out!

Emu Ranchers is a two player hand management and set collection game that plays in about 20 minutes.

In Emu Ranchers, players are trying to run a profitable emu farm. Each bird is worth as certain amount of dollars and players must play enough emus in a particular pen to make a profit after taking care of the construction costs. However, emus are a cranky lot and you can’t put any emu into just any pen. Emus must be played in a pen of like color and in either ascending or descending point values. At the end of the round, if you don’t have enough points of emus in a particular pen, you’ll lose money on the transaction. Play your cards right and you’ll make a tidy profit. At the end of the game, whoever has the most money wins.

The game play in Emu Ranchers will draw comparison to the Reiner Knizia gem Lost Cites. In fact, the game even says it’s inspired by Lost Cities, so the comparison isn’t unfair.

There are 2 ways to play Emu Ranchers, Basic and Advanced. Unless you have little kids, I’d recommend skipping the basic version as the advanced only adds 2 more card types (neither of which are confusing).

Each player starts the game with 6 cards and then someone goes first.
A turn is divided into two parts:
1. Play a card: Players have 3 choices to play a card:

2. Draw a card: A player can draw either from the draw deck or the top card of the discard pile (as long as it isn’t the card they discarded).

The game progresses in this manner until the draw deck has run out. When that happens, players can play any more cards currently in their hand before proceeding to scoring.

Each emu pen starts at negative 18 points. Players must remove enough cards from their pens until the have paid for all 18 points of the construction cost. Any overpays are lost. Players then score the value of the remaining cards in the pen. If they didn’t play enough cards to make up for the initial negative 18, then they take the renaming balanced owed as a negative to their overall score.

At the end of a predetermined number of rounds, whoever has the most points wins.

I think the comparison to Lost Cities is a fair one with Emu Ranchers. I can definitely see the influence in that game here. Does that mean Emu Ranchers is just a cheap knock off? Not at all. The game play, while similar, is still different enough to stand on its own.

I think Emu Ranchers makes a nice casual game. The setup is super quick, the rules are clear and easy to understand, and the game plays in 20 minutes or less. This makes it easy to get to your tabletop over and over.

The other plus of being a casual game is that it’s pretty accessible to everyone. Anyone coming from a background of playing games with a deck of cards (rummy, canasta, etc…) will be able to jump right in with Emu Ranchers. Being a two player game, Emu Ranchers also makes a great choice for a gamer to play with their non-gamer spouse. In fact, Mrs. Board Game Quest particularly enjoyed testing this one out with me.

If I had a gripe with Emu Ranchers it would be that the scoring feels a bit cumbersome. It requires a player to pull out cards until they hit 18 points. This tends to slow things down as players try and figure out the optimal card combination to hit exactly 18 as they lose any overage. This feels a bit odd as the main game plays so quickly and fluidly. At least it happens at the end of a round though so your game won’t feel interrupted.

Overall we enjoyed Emu Ranchers. The artwork (at least on the prototype) was well done and fit the theme well. I thought the rules were easy enough to learn to be able to jump right in and play. This includes playing the advanced rules which add a few wild cards and one cancel card. If you are a fan of set collection and card games with numbers (Lost Cities, No Thanks!), then Emu Ranchers will be right up your alley. This game fits in well with others of the genre. If you don’t really enjoy those types of games then nothing in Emu Ranchers will change your mind. Overall though, we found it to be an enjoyable, yet casual game. It’s a good game to pull out when you just want to relax and enjoy a quick card game.

If you are interested in the game, it is currently in funding on Kickstarter and scheduled for delivery in March 2014. A pledge of $15 will get you a copy of the game and all the stretch goals. You have until Friday, December 27th to become a backer so head over now.