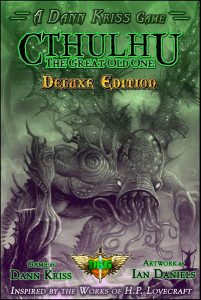 PUNY MORTALS! It is I, the GREAT CTHULHU once again in your electronic presence. The human Tony has again summoned me from my slumber in R’lyeh to review games of human interest. For those of you unfamiliar with my great works, feast your sanity on my previous reviews of Necronomicards, Pocket Madness, All Manor of Evil, and now… Cthulhu: The Great Old One.

Wait a human second. Am I being subbed just to review small card games of low notoriety just so Tony can get a review off his plate? Is my cosmic awesomeness just being used to drive page views?! I AM A BEING FROM BEYOND “TIME”! MY TIME IS VALUABLE!

This next game is about playing card pairs. It was on Kickstarter. Two to six mortals (not just humans) can play. As the humans say, let’s get this over with.

AIGH! Again with the human-sized cards! How can I hold these with my claws?!

The human-sized deck is shuffled and each player gets 9 cards. Three “Story” cards from the deck are revealed and play begins.

If players receive any Matched Pairs of cards in their opening claw of cards, they may lay these down. These pairs can also come from Linked Pairs. This is where I explain that the “Story Cards” in the game all refer to my biographer Howard Phillips Lovecraft. Each one of his factual accounts (aka short stories) has a card which references a character or object. Match the character with the connected object on another card and that’s a Linked Pair.

There are also Horror Cards, my personal favorite, which have random effects. Sign cards protect from some effects. And finally, there’s The Great Old One card with a selfie I helped out with. Ok, that last one might not be true. Paparazzi must have caught me before I got to Starbucks that day.

During the game, players will take turns to ask other players if they have certain cards. If they do, they must give the cards to the asking player. If not, the asking player gets to take a random card from the other player. Hmmm… sounds like giving your name to the barista at Starbucks. It’s C-T-H-U-L-H-U Brenda! Not CHAD!

Also on their turn, players get to take a card from the deck or switch a Story Card on the table with one from their hand. Then Horror cards can be played.

Anyways, players keep playing until a player has 7 or more pairs in front of them. If they are holding The Great Old One card in their hand, they… wait for it… they lose! Ageist! However, if they have a Cultist in their play area, they win?! WTH? Double ageist! I don’t need a helper. I can get around just fine on my own!

I know I keep getting reminders from players that the human concept of “time” means that it’s a valuable resource that humans can never recover. I especially hear it from Tony when I leave the milk on the counter in the morning. I GET IT! So, when humans say this game is a waste of their time, I’m kinda confused. I mean, a game with me in the title couldn’t be that bad? Apparently the game it’s closest to is something about telling your opponents to catch aquatic life forms with a pole and string. Very odd.

Unfortunately, this is what the Cthulhu brand has come to. Players complained that the game is very random with little to direct the flow of play. Asking other players for what cards they have is only engaging in games of 3+ players and even then, the dynamic of play was bland. The discovery of Horror or Story or cards, even with the 3 on the table to exchange from, is just not very interesting.

As a small card game that costs $20, the humans tell me this is expensive for the level of game received. The value in the deck could come from the art and conscious inclusions of elements from Lovecraft’s stories, but that just doesn’t make up for the average gameplay. Mortals looking for the best Cthulhu game to spend their “time” and money on can pass this one.

The human, Tony, has done it to me again. Cthulhu does not appreciate Cthulhu: The Great Old One as a card game. It’s too random and the gameplay is bland. The art is interesting for the connection to the writings of HP Lovecraft, but that’s about it. I just want to apologize to all my fans who expect high-quality games from the Cthulhu name. This isn’t one of them. Now to devour Dan Kriss, game designer.

Final Score: 1.5 Stars – If you are looking for a Cthulhu themed version of Go Fish with some more randomness, check out Cthulhu: The Great Old One. Otherwise, pass.

Misses:
• Random gameplay
• Lackluster choices
• Expensive for what it is